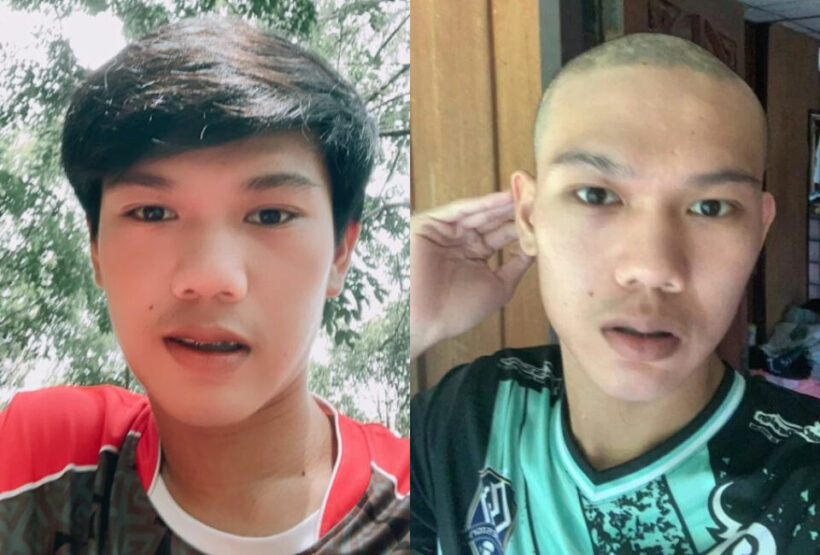 PHOTO: A student lost his hair after his second Sinovac vaccine. (via Eakkapop Thongtub)

After getting 2 Sinovac vaccines, a 19 year old student in Phuket claims his hair began falling out in clumps, leaving him bald. The vocational school student is from Phang Nha but stays now in Chalong in order to study at school and told the press that a doctor had verified the condition.

The man said he travelled to his family hometown of Tambon Phru Nai in Koh Yao district to get his Sinovac vaccines, both first and second doses. Of note, he received his second vaccine on July 16, long before the government started a drive to vaccinate school students with Pfizer vaccines.

He said he didn’t feel or see any side effects after his first Sinovac vaccine and everything appeared normal. But then, about 3 days after his second dose of Sinovac, he says he started losing his hair in fairly significant quantities.

“About three days after the second vaccination, the hair on my head began to fall out in clumps. And when I woke up in the morning, a lot of hair had fallen out and was all over my pillow. I was shocked.”

After losing clumps of hair, the man said he went to a private clinic to get help and advice from his doctor there. The doctor said that the vaccine had reacted with his white blood cells creating a harmful side effect from vaccination that caused him to become immunocompromised and begin losing his hair.

The 19 year old student says he went public with his story so that people were aware of the possible side effects, and perhaps to see if there was anyone else like him that had also lost their hair as a result of vaccination. He says that over the last 4 months, his hair has not grown back, though his body is otherwise recovering.

He said that his doctors explained to him that his condition was similar to a disease suffered by Thai actor Winai Kraibutr and that his immune system was impaired by the Sinovac vaccines. He was instructed by his doctor to rest from 5 pm on, go to bed early to get plenty of sleep, as well as avoid certain foods and be very careful to protect his weakened body from exposure to germs.

Manu
7 minutes ago, JohninDubin said: https://www.latimes.com/california/story/2021-09-16/1-in-3-covid-patients-suffer-long-covid-cdc-study The survey was based on the responses of 366 adults. Not sure if that should be regarded as reliable...

JohninDubin
19 minutes ago, Manu said: The survey was based on the responses of 366 adults. Not sure if that should be regarded as reliable... I first heard of the condition and the figure on a doc (either Panorama or Dispatches)…
MrNovax
18 hours ago, Lawyers_Guns_and_Money said: Why did they get tested if they had no symptoms? 18 hours ago, JohninDubin said: I'm even more confused now. Testing is often required for travel, business, even concerts. Due to these requirements i…
joelg69
..on the bright side, the "Yul Brynner" look got him a nice job on Broadway & Hollywood as King of Siam..

billywillyjones
well at least we know he didn't get a placebo...

Thailand aims for 65 million Covid-19 vaccines for next year