The island of Phuket in Thailand’s south has reported 10 new Covid-19 coronavirus cases today (Sunday), bringing the total to 119. Today’s new cases aren’t all in Patong, as has been the trend over the past week, with new cases being reported in Bang Tao, just north of Surin Beach area.

Among the confirmed cases announced today are six members of the same family that live in the Bang Tao area.

Due to the high number of cases originating in the island’s Patong entertainment district, the whole seaside town has now been officially locked down as of today, with checkpoints on all roads going in or out (more info below).

Details of the new case…

Case 110: A 40 year old Swedish man, arrived in Phuket on March 13 with his wife, who was confirmed as case 77 on April 1. 7 people are considered at at high risk and are being sought by authorities (NOTE: There are conflicting reports on this case’s age and gender).

Case 111: A 29 year old Thai woman, a maid, the wife of confirmed case 41, an Italian who works in Bangla. She fell sick on April 2, 2 people are considered at high risk.

Case 113: A 29 year old Thai man who works at a Patong hotel, the same hotel where Case 58 was confirmed. He became sick on March 22, 6 people are at high risk.

Case 116: A 27 year old Thai man, a welder in Bang Tao in Thalang, the son of case 94, also a welder. They work and live together. Though he shows no symptoms, 2 people are considered at high risk.

Case 118: A 28 year old Thai woman, a maid, another daughter in law of case 94, with whom she lives. She too shows no symptoms, but 2 people are considered at high risk.

Case 119: A 74 year old Thai woman who works in a local Bang Tao shop, the grandmother of case 94, who also lives nearby. She became sick on April 3, 8 people are considered at high risk.

The current Patong ‘lockdown’ has been imposed to to control the spread of the Covid-19 virus, according to the directive.

“Therefore we will prohibit people from entering or leaving the area, except for the transportation of essential goods, LPG gas, medical supplies, emergency response teams and ambulances, public servants, parcel deliveries and publications.”

The directive is in place from April 5 until notified.

Speaking to a couple of locals this morning they said they hadn’t been advised by anyone and were confused about the news. One told us he’d been walking his dogs on the beach this morning and didn’t run into any police. A local policeman in the town says he has been lining up for testing at Patong Hospital and that the streets are mostly deserted. Another expat said that they’d heard yesterday there might be a closure of the roads on Tuesday and was surprised to wake up this morning to see the town was in official ‘lockdown’. 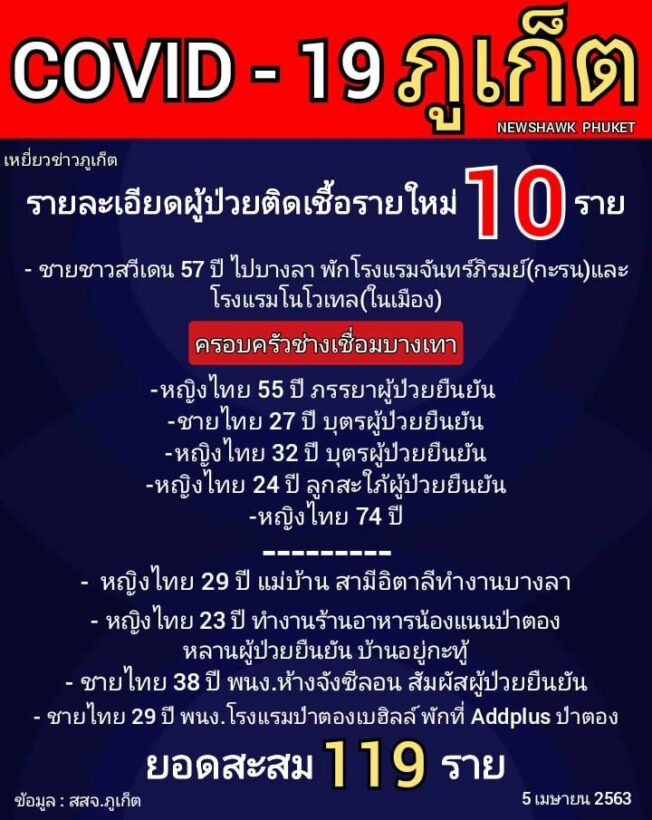 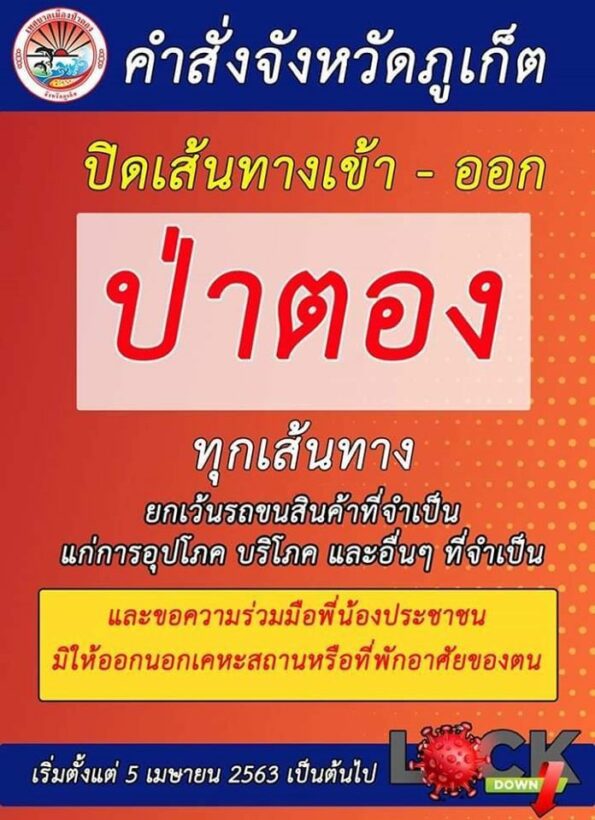