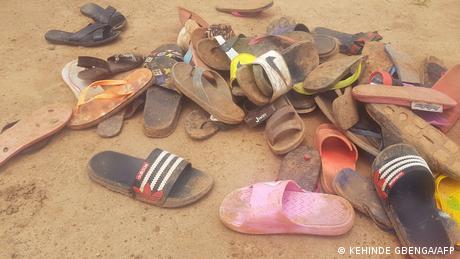 Gunmen kidnapped 140 students from a boarding school in northwestern Nigeria on Monday. It was the latest in a wave of mass abductions targeting schoolchildren in Africa’s most populous nation.

The assailants opened fire and overpowered security guards after storming the Bethel Baptist High School in Kaduna state before abducting most of the 165 pupils boarding there overnight.

“We still have no idea where the students were taken.”

“This government has failed the people of Kaduna,” Mustapha Kumbe, father of one of the abducted students, told reporters.

Monday’s kidnapping was the second in as many days, after police said eight people were seized from a hospital in Zaria on Sunday.

The gangs are often driven by financial motives to kidnap children and others and hold them for ransom.

It has become a sort of business to the bandits, particularly in Kaduna State where the governor, Nasir Ahmad El-Rufai, has been one of the most vocal local leaders, insisting he will refuse to pay ransom money.

Sometimes the gangs go as far as killing the kidnapped people to make a strong statement, especially to the governor.

Four months ago, this author was informed that armed bandits had killed 15 people in Amarawa — a village at the border of Nigeria and Niger — during the early hours of March 1.

Wearing armored vests and helmets for protection, my TV crew and I drove from Zamfara’s capital, Gusau, to Amarawa in Sokoto State.

The journey took us five hours by road. When we arrived, the community members had just finished a burial ceremony.

Alhaji Dan Juma, was already expecting us to tell his story as he began to relate the attack — during which his son, his brother and other 13 people had been murdered.

“They came around 2:30 a.m. They killed my son and my brother and took [another] brother,” Juma told me in the Hausa language through a translator.

“I pray for the government officials to protect the interest of the people, for God’s sake,” Juma pleaded.

Gunmen killed Juma a day after I spoke with him. They had contacted him demanding ransom money to secure the release of his abducted brother.

Juma’s death is similar to what many Nigerians in the north go through. But such stories barely make it in the news.

The perpetrators are often gangs of bandits taking advantage of inadequate policing and the easy availability of firearms.

“In terms of the number of attacks on schools, Kaduna has obviously suffered more than these other states,” said Nnamdi Obasi, an analyst with the International Crisis Group (ICG) think tank.

“The persistent targeting of schools in the state suggests the armed groups may be trying to break the state government’s resolve not to pay ransom to criminal groups.”

The banditry violence, unconnected to the Boko Haram insurgency in the northeast, began as a farmer-herder conflict in 2011 and intensified between 2017–2018 to include cattle rustling, kidnapping for ransom, sexual violence and killings.

One resident told DW that bandits were taxing farmers in exchange for safety — a sign that the government has lost control.

Heart of the issue

Criminal groups often target people who can pay a large ransom, but they also carry out many more attacks and demand a lower ransom per victim — amounts of around $1,000, according to a report by SBM Intel, Nigeria’s leading geopolitical intelligence platform.

Bandits complain that the central and state governments abandoned them in the last 20 years, saying there were limitations on grazing rights.

Herders face excessive taxes when trying to sell their livestock at the market and sometimes encounter extortion or brutality by military and police personnel, according to Shani Shuaibu, a journalist who was recently granted rare access to bandit hideouts in Zamfara state.

“They say their children are not employed and they’re not going to school,” Shuaibu told DW.

“I asked them: Are you guys educated because the government offers employment to graduates. That’s the problem. We are not educated. If we are educated — can we venture into banditry?”

Security expert Rabiu Adamu called for dialogue that will lead to the disarmament of the bandits. In the event that peace talks fail, the former military officer suggested a radical approach. “Use maximum force to fight them. I’m talking of maximum force with modern equipment. That’s the best way to put it,” Adamu told DW.

“It is not something we can finish within a year. It’s a gradual process. So gradually, all those bandits will be repented and come back to their normal activities.”

The military has launched repeated operations, but all too limited in scale to secure the state’s 40,000 square kilometers.

Ground-attack jets have bombed bandit hideouts, but boots on the ground and a political response were needed, analyst Adam argued.

AFP and dpa contributed reporting to this article.

Dominating delta and an unexpected kiss