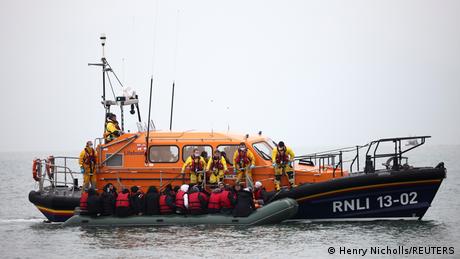 At least 27 people attempting to seek refuge in the UK have died after their boat capsized in the English Channel, just off the northern port of Calais.

According to French authorities, three young children were amongst those who lost their lives at sea.

The UN’s International Organization for Migration (IOM) said the tragedy was the “largest loss of life” since 2014, when the group began collecting data about missing migrants in the channel.

But this disaster instantly escalated into a political spat between France and the UK with both nations squabbling over who should bear responsibility.

Speaking to journalists at Downing Street, British Prime Minister Boris Johnson said, “We’ve had difficulties persuading some of our partners, particularly the French, to do things in a way that we think the situation deserves.”

But French President Emmanuel Macron urged British authorities to share responsibility. According to the Élysée, in a phone call with the British Prime Minister, President Macron said he expected full cooperation and that the situation should not be used “for political purposes.”

British Labour politician Alfred Dubs, who sits with the opposition, said the French have a right to be fed up.

“You can’t shout at them, then expect them to cooperate, like the British government do — that’s disastrous. By the noise that politicians are making here, it looks like we are taking them (the refugees) all, but in reality, the French are taking many more,” he told DW.

Mathilda della Torre, founder of Conversations from Calais, a project documenting conversations between volunteers and refugees in the camps in Calais, said this diplomatic battle has dehumanized the situation.

“People continue to undertake this dangerous journey to seek asylum because they do not have safer options of doing so. Both the UK and France have created this tragedy. Blood is in their hands. This blame game won’t solve the crisis,” she told DW.

“The people who died have also been dehumanized with mainstream media and politicians referring to them in terms of numbers crossing the Channel. We have to put a face to the people and focus on their stories and lives instead of referring to them as threats arriving at borders,” she added.

Speaking to MPs in the British Parliament, Home Secretary of the United Kingdom Priti Patel acknowledged this and said she would also ask media outlets to reflect on their use of dehumanizing language to describe the people who drowned in the channel.

At 2 p.m. on Wednesday evening, a French fisherman raised the alarm when he spotted motionless bodies floating in the water just off the coast of northern France.

While search and rescue missions immediately arrived at the scene, the public prosecutor’s office in Lille said two men survived the disaster and were being treated at a hospital in Calais. They added that a criminal investigation had also been launched to find the smugglers involved.

Speaking to French media RTL, France’s Interior Minister Gerald Darmanin said: “Those responsible for the drama which took place yesterday in the Channel are the smugglers, who for a few thousand euros promise Eldorado in England. The smugglers are criminals, this tragedy reminds us, painfully.”

The UK’s Priti Patel shared a similar view. “It serves as the starkest possible reminder of the dangers of these Channel crossings organized by ruthless criminal gangs,” she wrote on Twitter.

Bram Frouws, head of the Mixed Migration Centre (MMC) monitoring group, explained that such a response feeds into a militarized narrative.

“I think if you if you listen to the statements we’re hearing from Boris Johnson, for example, or from Priti Patel, they call it human trafficking. They’re talking about ruthless criminal gangs. But they’re conflating migrant smuggling and human trafficking when the two concepts are very different; this is often done deliberately to justify a highly securitized response,” he told DW.

“If smugglers were involved in yesterday’s boat tragedy, we have to arrest them but that is only part of the response. It seems it’s the main focus in the current response, but the solution is bigger than just trying to address how people got to the UK from France,” he added.

Catherine Woollard, the director of the European Council on Refugees and Exiles (ECRE) shared a similar view. “Smugglers are a symptom not a cause in this migration crisis,” she told DW.

“Many refugees, unfortunately, rely on smugglers because they’re not given the option of safe pathways to seek refuge. Both the UK and the EU have to prioritize facilitating safe and legal pathways for people to claim asylum,” she said.

While protests have erupted in both the UK and France condemning the crisis in the channel, UK’s Priti Patel said France should take more responsibility in deterring migrant boats from leaving Calais.

Speaking to MPs in the House of Commons she also said the UK would cooperate by offering joint patrols as a solution.”I’ve literally just spoken again with my French counterpart, Minister Darmanin, and I’ve once again reached out and made my offer very clear to France in terms of joint France and UK cooperation, joint patrols to prevent these dangerous journeys from taking place,” she said.

DW’s Brigit Mass, reporting from the UK said, “The French don’t accept this. The mayor of Calais for example says the fault lies with Boris Johnson who doesn’t have the courage to assume responsibilities in his country.”

But ECRE’s Woollard argued that border patrols would not solve the problem.

“Externalizing migration management with border patrols and asking another country to take responsibility is not the solution. After Brexit, the UK left the Dublin agreement making it harder for the country to cooperate with European nations. But cooperation with respect to search and rescue missions along the channel is important between France, UK, Belgium, and the other nations along the channel to prevent further tragedies,” she told DW.

Despite yesterday’s disaster in the English Channel, boats continued to arrive in the UK from France even this morning in the port of Dover according to British media.

“Many people are keen to migrate to the UK since they speak the language and might also have family there. They also come from countries like Iraq which have historic links to the UK. Moreover, the harsh living conditions in the camps of Calais and police brutality toward pushes many of them to leave France,” Conversation from Calais’ Mathilda della Torre told DW.

“It is important for the UK and the EU to improve asylum conditions. Many of these people are those fleeing conflict and need protection,” she added.

“Countries need to work on developing humanitarian visas which will give people the option of applying for asylum so that they don’t have to go through treacherous journeys. The political battle has to stop.”

Pakistani artists concerned about Turkish actors taking away their roles

Afghanistan: How a remote border crossing allows nomads to travel