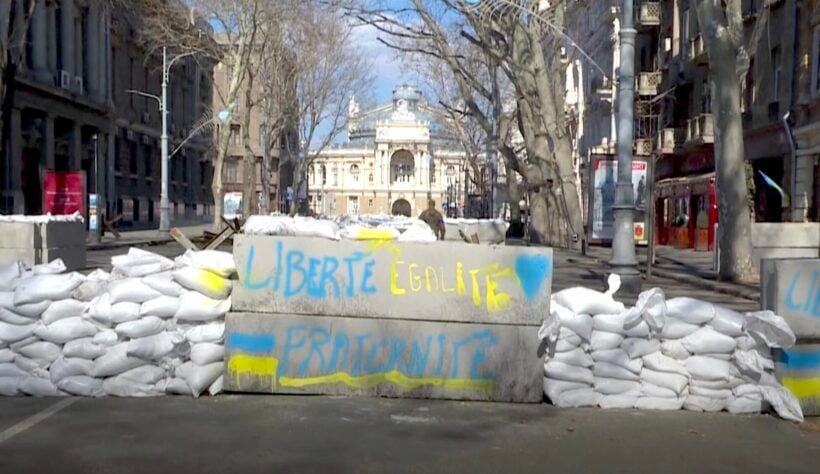 Barricades are seen on the streets of Odessa in preparation of Russian attacks. Credit: France24 | YouTube

As Russia’s invasion of Ukraine enters its fourth weeks, here are the latest headlines…

• Ukraine’s Deputy Prime Minister rejected Russia’s demand to give up the strategic port city of Mariupol by 5am Monday morning Moscow time (4 am Monday in Mariupol). The Russian Ministry of Defence had offered to open humanitarian corridors in exchange for a surrender of the city. Ukraine rejected the ultimatum, saying there is “no question of any surrender.” Ukraine’s president Volodymyr Zelensky alleged that Russia committed war crimes in Mariupol, where heavy fighting has now reached the centre. Earlier, the city council says an art school in the city was attacked. About 400 people were sheltering there.

• On Sunday, Zelensky spoke by video link to Israel’s parliament, as he continues speaking with world leaders to rally global support. Speaking to Israeli MPS, he said the time had come for Israel to pick a side. He also recalled “The final solution of the Jewish question, saying Russia also has a final solution — about Ukraine. He compared what Russia is doing in Ukraine to the Nazi holocaust, saying…

“We want to live. Our neighbours want to see us dead.”

• But his comparisons to the holocaust drew swift criticism from some MPs, including Communications Minister of Israel Yoaz Hendel, who rebuked Zenelnsky on Twitter…

“We cannot rewrite the history of the Holocaust,
this genocide which was also committed in Ukraine.
The war is terrible but comparing it to the horrors
of the Holocaust and the final solution is revolting.”

• Israel has so far not sided with Western countries in enforcing sanctions on Russia, instead opting to play as a mediator for peace. Israel has also rejected to supply military support. The Israeli PM met with Putin at the start of the invasion and the dialogue has continued. Notably, Israel maintains close relations with some Russian oligarchs who are also Jewish and maintain Israeli citizenship. Meanwhile, there has been widespread public support for Ukraine among the Israeli public.

• Pope Francis has said that the “war of aggression against Ukraine is inhuman and sacrilegious.” He made the remarks during his his Sunday Angelus address with pilgrims in St. Peter’s Square, the day after her made a spontaneous visit to young Ukrainian war refugees being treated in a pediatric hospital in Rome on Saturday.

“Unfortunately, the violent aggression against Ukraine does not stop, a senseless massacre where every day there is a repetition of slaughter and atrocities. There is no justification for this! I plead with all those involved in the international community to truly commit to ending this abhorrent war.”

• 10 million people have now fled their homes in Ukraine, according to the UNHCR, the UN Refugee Agency. That’s about a quarter of the Ukrainian population, as the war enters its fourth week. Nearly 3.4 million of those have reportedly fled to neighbouring countries, mostly to the Polish border, with nearly 50,000 arriving daily at the Polish border town of Prezemysl.

• Meanwhile, at least 900 civilians have been killed since the start of the Russian invasion. But with lack of reliable data from conflict zones like Mariupol, it is believed that the actually civilian hold is considerably higher. On Sunday, UNHCR chief Filippo Grandi reported the grim statistics and spoke of holding Russia accountable…

“Among the responsibilities of those who wage war, everywhere in the world, is the suffering inflicted on civilians who are forced to flee their homes… The war in Ukraine is so devastating that 10 million have fled, either displaced inside the country, or as refugees abroad.”

• On Sunday, Zelensky told CNN that he’s open to negotiations with Russian President Vladimir Putin, but that failed negotiations could result in a wider war. Meanwhile, Turkey has said Russia and Ukraine are getting closer to agreement on “critical” issues.

• US President Joe Biden and fellow world leaders will hold a set of emergency summits in Europe this week. But many experts think anything they can resolve to do will likely not be enough to end the war in Ukraine. The White House has said that Biden has “no plans” to visit Ukraine.

• The front lines of Ukrainian forces are not shifting, as Russian forces lose momentum. Meanwhile, Russia has fired cruise missiles from the Black Sea and the Caspian Sea. And Russia said it has again fired hypersonic missiles in Ukraine. Defense ministers said patriot air defence system have started arriving from NATO partner countries in Slovakia.

• Kyiv’s mayor said shelling is hitting residential houses and a shopping centre in Podil district. One person was killed after an explosion in the Ukrainian capital on Sunday. The UK said Russian forces are still trying to circumvent Mykolaiv.

• French Minsiter of the Economy Bruno Le Maire said France has not ruled out energy sanctions against Russia. Meanwhile, Gazprom says it continues Russian gas exports to Europe via Ukraine.

UKRAINE UPDATES: Ultimatums ‘not feasible’; Russian offensive stalls; Putin’s ‘back is against the wall’