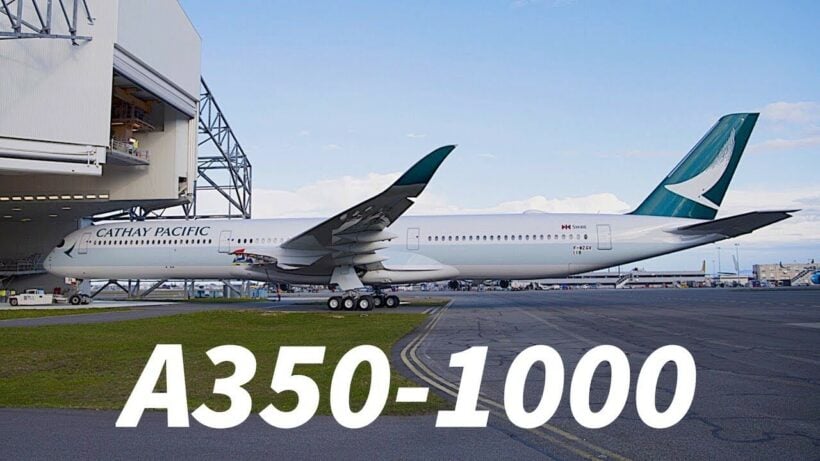 Cathay Pacific is the first airline to land an Airbus A350-1000 in Thailand and was congratulated by Airports of Thailand (AoT) deputy vice president Kanogwan Kasetsin and customer relations director Anussara Mongsup. Cathay Pacific’s A350-1000, the largest variant in the A350 family, carries 334 passengers in first, business and economy classes.

Staff of Cathay Pacific, led by Kendrick Ko, country manager for Thailand and Myanmar, and sales and marketing manager Yongyut Lujintanon welcomed the first of its new Airbus A350-1000 aircraft to Suvarnabhumi Airport this week.

Cathay Pacific will begin flying the A350-1000 model to Washington DC on September 15. The aircraft will also serve Madrid, Tel Aviv, Amsterdam, Manchester and Zurich beginning in the winter.

Keep in contact with The Thaiger by following our Facebook page.
Never miss out on future posts by following The Thaiger.
News Categories:BangkokBusinessTravel
Related Topics:
Up Next

With impeccable timing, Nang Loeng police have summoned 5 protest leaders to appear before the Special Prosecutor’s Office at the Dusit District Court in Bangkok. They will be formally charged over their roles in a protest in front of the Army’s headquarters on July 20. At the time it followed an online exchange from an Army official criticising the students who had been protesting at the Democracy Monument days before.

The protest targeted Colonel Nusra Vorapatratorn, deputy spokesperson of the Army. Posting on her Facebook page about the Saturday protest, the Colonel said that rally’s participants should “focus on doing their jobs rather than joining the protest.” The Colonel later deleted the social media post.

Another army spokesman, Colonel Winthai Suvaree, spoke to the media at the time and stated that Nusra “had expressed her personal opinion” and that “she is no longer the deputy spokesperson”.

After protesting outside the Army over the contents of the post, 5 protest leaders face official charges of “violating the Emergency Decree, the Traffic Act and use of loudspeakers in public without permission. The 5 protagonists facing charges are human rights lawyer Anon Nampa, Parit “Penguin” Chiwarak, Piyarath “Toto” Jongthep, Suwanna Tarnlek and Panupong Jardnok (Mike Rayong).

All 5 deny the charges and say they will defend their roles in court.

The charges follow a weekend of protests, with up to some 30,000 people gathering in the Bangkok rain to rally against the government and confirm a 10-point manifesto which includes demands to reform Thai politics and the country’s monarchy. Specially the demands include the dissolution of the Thai parliament, standing down of the current PM and a new constitution to replace the 2017 Thai charter.

Today the Fine Arts Department has also says it will file charges of “trespassing on an archaeological site” after protesters yesterday embedded a symbolic brass plaque to replace another plaque that dates back to the 1932 Siam Revolution (when a bloodless coup overthrew the ‘absolute monarchy’ in Thailand). That plaque mysteriously disappeared in 2017.

The protesters responded this afternoon by saying that Sanam Luang is not an archaeological site, but a “public space for recreation and for vendors and hawkers”.

Following on from the support of the crowd over the weekend, the protesters are planning to stage another protest in front of Parliament this Thursday. A House debate on constitutional amendments is due to start this Wednesday.

A woman was shot and killed at a Bangkok temple today. Police say 39 year old Linlada Phattanphan was found inside the temple, covered in blood. Her head had been shot at 4 times. Linlada went to the temple this morning to make merit, according to her maid, 52 year old Maneerat Srithornrat. The maid told police that the 2 of them were about to head home when another woman came up behind Linlada and shot her 4 times at a close range. The alleged shooter fled the scene.

Police say they were called to the temple in Bangkok’s Bang Khae district around 7am. A forensic team from Siriraj Hospital responded and joined police in the investigation. They say Linlada was shot at close range with 9mm bullets.

Maneerat told police the alleged shooter was around 35 to 40 years old and was wearing a cap that shadowed her face.

The Thai Fine Arts Department claim the pro-democracy protesters, who installed a symbolic brass plaque in an area next to the Grand Palace yesterday morning, broke the law. The department filed a complaint saying the installation of the plaque damaged a historic site, a violation of the Archaeological Site Act.

Protesters cemented the plaque in the perimeter of the Royal Field, known locally as Sanam Luang. It read “At this place the people have expressed their will, that this country belongs to the people and is not the property of the monarch as they have deceived us.”

“Those who invade a historic site or destroy or depreciate it can face up to 7 years in prison and a fine of up to 700,000 baht.”

The department says since the plaque was illegally installed at Sanam Luang as part of the weekend’s protests.

“It is considered destruction and depreciation of a historic site.

The Fine Arts Department made no comment at the time of the removal of the old historical plaque in 2017.

4 people drown after SUV careers into canal in Chon Buri