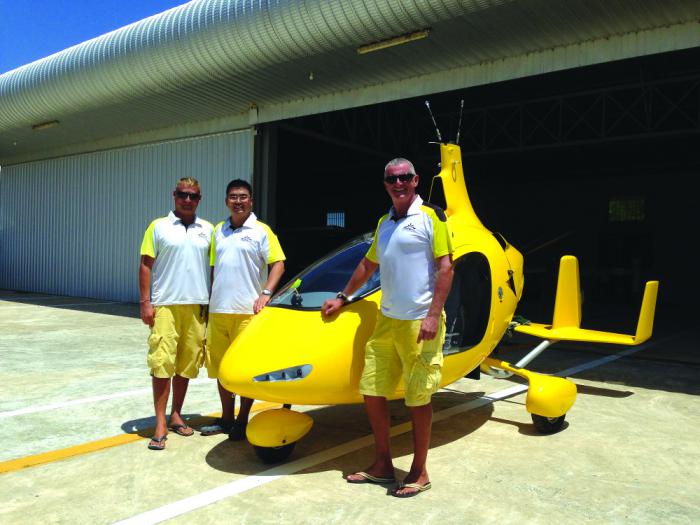 PHUKET: There has been a great deal of action recently at Phuket Airpark, Southern Thailand’s only privately-run airstrip, among a diverse group of aviation enthusiasts and entrepreneurs.

The Airpark, which opened in Pa Khlok with a single ultralight six years ago, is now home to 11 light aircraft in a wide variety of designs. None are more eye-catching than the most recent addition to the fleet: Thailand’s first “AutoGyro Cavalon”, a tiny German-built two-seat “gyrocopter”, a hybrid between a plane and a helicopter that looks like a futuristic version of the contraption made famous in the Australian film Mad Max 2.

Whirlybird
Phuket-based Danish expat and partial owner of the gyrocopter, Torben Jensen, told Up in the Air that the aircraft is one of the safest in the world – virtually impossible to stall and capable of taking off or landing over extremely short distances. If the engine fails, it simply autorotates to a safe landing.

Together with well-known building contractor Best Wanamakok of Wanamakok Civil & Environmental Consultants and another Dane, Michael Lumby, Mr Jensen and his team have gained the exclusive rights to sell AutoGyros in Thailand.

The first will serve as a demonstration model and the company plans to buy two more in coming months, thus establishing Phuket Airpark as home to AutoGyro’s sole and exclusive dealership in Thailand.

The first AutoGyro arrived by container at the Airpark recently, and was quickly assembled by the enthusiastic team who swarmed about it like kids on Christmas morning.

Mr Jensen, who runs a property rental business in Nai Harn, told Up In The Air that he intends to use the aircraft to “add value” to the visits of guests staying at his resort apartments in the Nai Harn area by offering them bird’s-eye views of iconic vistas such as Laem Promthep.

At about 6.5 million baht, the Cavalon is at the top end of three AutoGyro makes designed and produced by AutoGyro GmbH of Hildesheim, Germany.

The futuristic design features a single main rotor more than eight meters across powered by a 100hp, four-stroke Rotax engine, considered among the most reliable in the aviation industry. Thrust is delivered by a composite three-bladed propeller mounted behind the teardrop-shaped fuselage, also made of lightweight composite material.

The team’s plan is to invite two flight instructors from Europe to teach Airpark owner Suchard “Robert” Raksangob and Phuket Airpark Safety and Flight Operations manager Pat James, who will in turn teach Torben and his team how to operate and maintain the unique aircraft safely.

Suchard Raksangob with his ‘Italian Girl’, a 1964 SIAI-Marchetti SF-260, took the author and his daughter up for a scenic flight. Photo: Somchai Huasaikul

Italian girl
Another new addition to the Airpark’s expanding fleet is Suchard’s “new girl” – an Italian 1964 SIAI-Marchetti SF-260, the aerial equivalent of those classic Italian speedboats of yesteryear. Powered by a Lycoming 200hp engine and piloted by Suchard, this was the aircraft that took us on an eye-opening half hour tour around the island during which we snapped hundreds of aerial photos to document Phuket’s ongoing transformation from real jungle to concrete jungle.

For the record, Suchard was a supreme gentleman when my daughter, riding alone in the back, got air sick. [Note to self: bring plastic bags next time, if there is one.] Robert, who is half German, noted that Thais seem to experience air sickness far more often than their Caucasian counterparts.

De plane boss, de plane
Next month will see the Airpark fleet expand further when Pat and his Aero Pro Management firm take possession of a pair of two-seat Brazilian sea planes, captained by factory-trained pilots, that should be perfect for “splashing and dashing” in the waters of Phang Nga Bay.

These aircraft will be permanently based at Phuket Airpark starting next month, providing yet another exciting opportunity for the island’s aerial enthusiasts. Pat and his team hope to take possession of the planes and fulfill all the regulatory requirements to have them flying by the start of the next high season.

Pat, a former Vietnam combat helicopter pilot, will not be directly involved in the training, but will continue to oversee all safety aspects, including those brought about from having such a diverse array of aircraft operating out of the same facility.

Control issues
One of the most prominent features at the Airpark is the new flight control tower. The tower and covered canopy area below a cool place to hang out and watch all the activity while enjoying reasonably priced, ice-cold beer. With that in mind, it is fortunate that they also have added a new and comfortable wicker bathroom facility just a stone’s throw away.

Big birds, little birds
The new tower was the center of activity at a special “monks blessing” ceremony of eight aircraft at the park last month. After the ceremony, the monks were treated to a special show by none other than world-famous aerobatic pilot Les Vorosmarthy.

Going up with Les by special request was a junior air traffic control officer at Phuket International Airport (HKT), one of a large contingent of AeroThai team members who turned up for the occasion. It was a good chance for the two air traffic control teams to meet and discuss methods of keeping “the big birds and the small birds” apart, as they like to put it.

Air traffic controllers at the crowded Phuket Airport monitor some 200 flights daily though that airfield alone and are also responsible for tracking flight movements across the entire southern region, so they have little time, space or inclination to deal with recreational aircraft. Airpark owner Suchard told Up in the Air that the turnout and special request to take part in the aerobatic show demonstrated the strength of the growing relationship between the two teams.

This hot air balloon was on display at the Phuket Airpark Airshow in 2013.

Another activity now available through Phuket Airpark is tethered hot air balloon flights offered by Muscovite Igor Naymilov and his team. Pat and Suchard explained that hot air balloons have a wide variety of recreational, promotional and commercial uses by hotels, shopping malls and MICE events.

When aloft, the ten-story-high balloon is a real sight to behold, capable of carrying promotional banners offering publicity in an unrivaled eye-grabbing way that will not obstruct land-based
activity like so many obnoxious caravans of slow moving “sound trucks”.

Dog of the Week: Chill