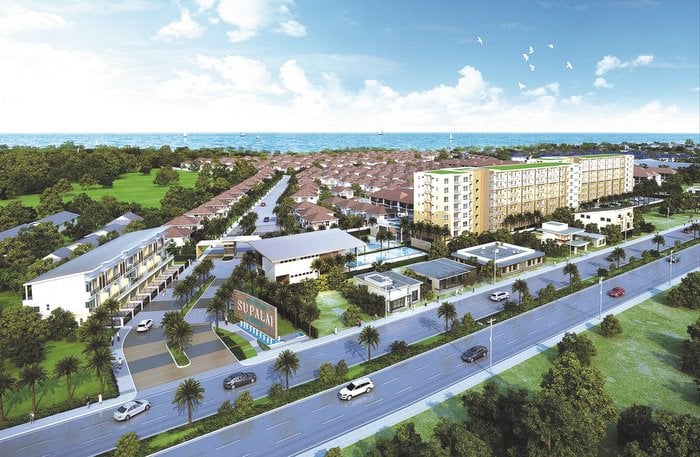 PHUKET: Making waves all the way to Bangkok is the recently launched Supalai Lagoon Condo because it has turned out to be one of this listed developer’s best performing condominium projects this year.

Supalai Plc’s Chairman and CEO Prateep Tangmatitham said at an exclusive interview in the capital last week that it is this project’s good location, not only fronting Thepkasattri Road, but also next to the sea, which appeals to people. They like it even more when they actually drive into the estate because they can feel the sea breeze as soon as they get out of the car.

“From the fourth floor upwards, you can see the sea and people living on the second and third floors can go up to the roof to enjoy the sea view.”

The estate is divided into two parts, with the condominium, valued at 570 million baht, covering 4 rai and comprising two eight-storey buildings housing a total of 406 units.

Meanwhile the housing subdivision, called Supalai Lagoon Phuket, and valued at 2 billion baht, covers 80 rai and has 482 homes including two-storey single houses on a 50-square-wah plot; a selection of new type houses on 36-square-wah plots; as well as 20-square-wah town homes.

“Where price is concerned, the condos start at a little over 1 million baht, going up to 3mn baht, while the housing subdivision starts from 2mn baht and reaches 11mn baht,” Mr Prateep said.

He explained that in Thailand a middle-income home is in the range of 2 to 5mn baht, while a high-income dwelling is from 6 to 11mn baht.

“Buyers are mainly Thai but some foreigners have also bought. Foreigners married to a Thai have bought housing subdivision units while others have opted for condos.”

Although island regulations prevented Supalai from building anything higher than eight storeys at this estate, it is currently building a 15-storey condominium, called Supalai Vista Phuket, in the Old Town.

“In Phuket we have already developed five condo projects, but there are only units for sale in the last two, plus a few left in the third one.

“We have also launched seven housing subdivisions on the island and four of them have sold out.”

While there is no more land to develop additional phases at the Supalai Lagoon estate, Mr Prateep says firmly that his company will continue developing on the island and is already looking for new land plots.

“We buy new land every week,” he says.

However, the cost of developing projects on Phuket is approximately ten per cent higher than Bangkok, he admits, because all major construction materials have to be transported from the capital.