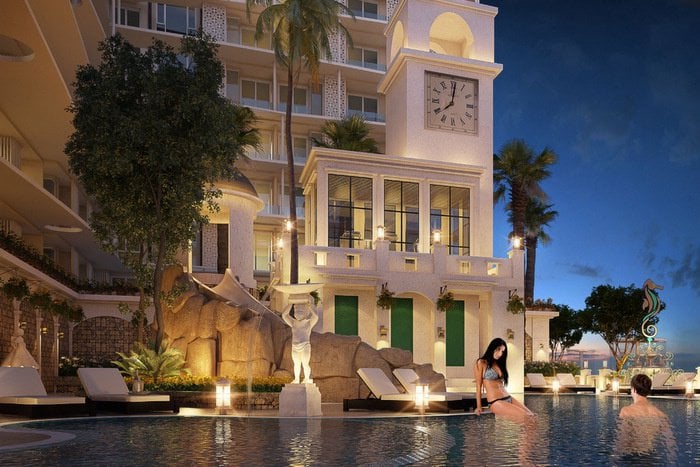 PHUKET: Seven Seas Condo, a plush new resort-style condominium project, is about to shoot up in the heart of Phuket Town.

The 2.5-billion baht Seven Seas Phuket project is located on Hongyok-Uthit Road, near Bangkok Hospital Phuket, and consists of four, eight-story buildings with a total of 975 units – all surrounded by views of Phuket’s lush, green hills.

Developed by Porchland Group in partnership with Universal Group, the joint venture is confident of its success due to the popularity of their 2014 Massa Luna Condominium Phuket project in Nai Yang.

“Phuket is one of the best places in Asia for the holiday home market, as well as being a tourist destination, and over the years tourism here has been growing steadily,” said Chitsanucha Phakdeesaneha, executive director of the Porchland Group.

The fully furnished units in the tastefully designed and comfort-focused project are divided into three types: studios of 23.5 to 26sqm, one-bedroom units measuring between 35.5 and 36sqm and two-bedroom units of 54.5 to 55sqm. Prices start at 1.5 million baht.

Every facility one would expect of a project of this standard will be featured, including a luxury hotel-style lobby, swimming pool, a children’s pool, a large tropical garden, an outdoor Jacuzzi, a gym, as well as “his and her” saunas. For residents’ peace of mind, 24-hour security and a CCTV system are provided.

The design of the condominium incorporates elements of seven well-known beautiful islands and aims to recreate the relaxing, holiday atmosphere of destinations such as Bali, Honolulu and Jeju, to name a few.

“As a luxury-style condo resort of a standard that has never before existed in Phuket, we anticipate Thai as well as foreign buyers and investors,” Mr Chitsanucha said, adding that the demand for real estate is growing in the advent of the Asean Economic Community (AEC), a factor that adds to the developers’ confidence.

“Porchland has enjoyed great success in its past 15 projects, owing to its professional expertise in property management. We draw confidence from this success and believe that Seven Seas Phuket will meet all the needs of its target group,” Mr Chitsanucha concluded, adding that he was excited to be building a new luxury property in the heart of Phuket Town.

Across the Land: Building a sustainable home in Phuket