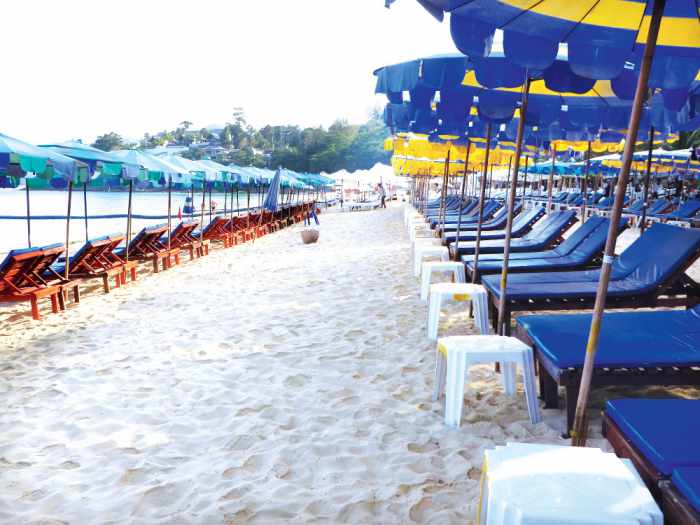 For those who live overseas or else don’t go near the water, the current ongoing transformation of Phuket’s beaches is nothing short of magic. Taxi stands removed, sun lounges nowhere in sight, and structures on public land being dismantled. Every day seems to take a new twist and turn in this reality show-like event. Who’s safe? Who will go? The rumor mill is constantly churning.

At the same time, there is an interesting debate amongst hoteliers about the question over the necessity of long sleek lounges for tourists. Is the need real or imagined? Beaches across the world, from Hawaii to Australia and California, require beach goers to put down a towel or a mat and tough it out. Yes, in the real world, humility and humanity meet down by the seaside.

Here in Phuket, the snowbird legacy of Europeans escaping the winter chill is the foundation of high season tourism. So although many Asian tourists and other travellers head for the mall, the island’s provision of a sunny escape from winter is still a strong draw card.

It’s hard to imagine tourist’s cancelling their holidays due to the beach clean up, and if anything, the long-term prospects are bright. I’ve elected to raise my family here and the prospect of Phuket’s lifestyle being passed on to the next generation is admirable. For so many residents, locals and foreigners alike, a light has been switched on at the end of a long dark tunnel.

For those who want to bake in the sun, a large selection of the island’s hotels have large spacious pools with lounges, cabanas and every manner of day bed, so there are options for those who want to bask in the sun. The pressure for beach lounges is most evident in markets such as Patong, with its influx of “same-same” bed factories which have no public areas or features to offer guests except for cheap rooms. These will suffer and rightly so. There is a reason why investment in a sustainable resort requires building more than just the four walls of a box.

The current set of Phuket clean-up measures needs to be applauded and perhaps American Secretary of State John Kerry, who remains critical of all things Thai, should set his feet on the ground before waging a war of negative travel advisories which continue to hamper the country’s broad tourism sector.

Is there an opposite side of the coin? Of course, for the beach workers who man the massage huts or struggle to make a daily wage, the impact is harsh and needs to be addressed. In terms of reforms, absolute power corrupts, and hopefully in time there will be equilibrium in government.

But for now, tourism stakeholders in Phuket have every reason to view the current state of play at the beaches as a strong, long-term, positive development. To drive around Phuket and lose sight of nature would be a journey of incredible sadness. It’s easy to be skeptical and stay on the sidelines about the road ahead. But all of the current signs are saying that we are headed in the right direction – for the first time in a very, very long while.