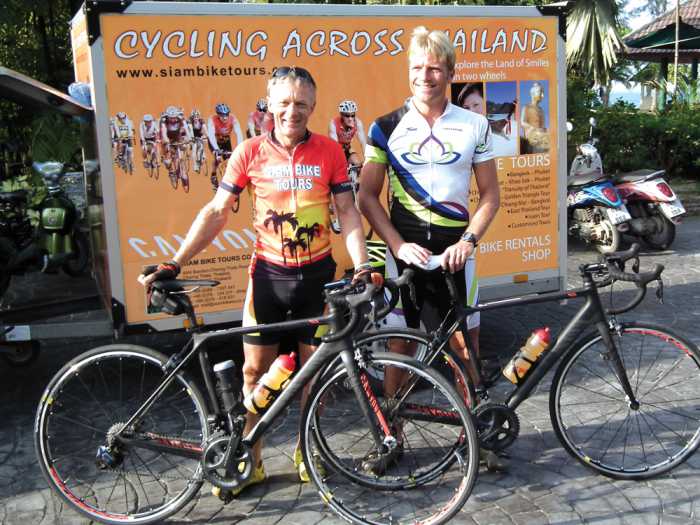 PHUKET: Martin Brot, the owner of Siam Bike Tours, is an extraordinary man. He is undoubtedly one of the pioneers of long-distance recreational cycling in Thailand, and his company has built an international reputation which lures hundreds of cyclists to Thailand and Phuket, every year.

Meeting Martin is a joy in itself… he’s a vital, energetic ball of wiry fitness and enthusiasm. He’s a living, breathing advertisement for the physical and mental benefits of a healthy, outdoor, cycling-based lifestyle. He’s also a man who has turned his lifelong passion into a successful business where his hands-on involvement brings happiness and healthfulness to hundreds of his clients. That, to my mind, is as close to a perfect definition of “success” as you will find!

Martin is an example of that famous adage about not judging books by their covers. He stands about 170 centimeters tall and weighs just 63 kilograms soaking wet – a weight that he’s maintained since he was a slip of a lad of twenty summers. But hidden within his sinewy frame are a heart and engine of extraordinary power and strength. He has incredible lung capacity, aerobic power and leg strength, which, coupled with his intense mental resilience, make him the incredible distance cyclist that he is.

How did this come about? As is the case with most first-class athletes, it is the result of genetic predisposition and training.

Martin was born in Davos Platz in the Swiss mountains surrounded by greenery and well-oxygenated air. He was also fortunate to discover his passion for cycling at a young age. He was given his first bike at 14 and immediately fell in love with cycling. He was already a keen hockey player and had developed great aerobic power and leg-strength as a result, and so a year later he started cycle racing.

He was naturally good at it, but soon realized he didn’t want the full-time commitment and single-mindedness that competitive cycling dictates.

While Martin is an excellent amateur cycle racer with many prizes in his trophy cabinet, he says, “Following a sort of Buddhist ‘middle way’ is my ideal for cycling. While I love racing and relish the competitiveness and challenge, I also enjoy a drink and even the occasional small cigar. For me, it’s more important to lead a balanced and happy life than to win races.”

Thirty years ago, when he was 26, Martin and his vivacious wife Rosita started coming on holiday to Thailand. They discovered Phuket and immediately fell in love with the laid-back charm the island had in abundance in those seemingly far off times. They spent many happy hours cycling around Thailand on road bikes and then, 11 years ago, decided to ‘test market’ leading an international group of riders on a week-long Bangkok to Phuket adventure. The idea caught on like “blazing saddles”, and so they launched their Siam Bike Tours company.

“Our Bangkok to Phuket cycle ride was a wonderful way of engaging with, and intimately experience, the real Thailand. The locals we met were unspoiled and a group of Western cyclists in bright Day-Glo attire on road bikes was a huge novelty. The 810-kilometer-ride spread over eight days was designed to give participants a memorable biking adventure on beautiful, well-paved routes through diverse tropical landscapes in pleasant temperatures,” recalls Martin.

“I believe that experiencing the culture, seeing the sights, meeting locals, savoring Thai cuisine, making friends, enjoying traditional Thai massages and simply having fun while exercising in the Thai outdoors is a formula that’s hard to beat.”

Certainly, over the past 11 years, hundreds of happy participants would agree and the fact that more than fifty percent of Martin’s current clients are ‘returners’ is the best possible endorsement for Siam Bike Tours.

Following on from his Bangkok to Phuket rides, Martin expanded road-bike touring to all corners of the Kingdom. He now rides the fearsome loop northwest of Chiang Mai through Pai, Mae Hong Son, Mae Sariang and finally, to ‘the summit of Thailand’, the peak of Doi Inthanon at 2,565 meters – a tour of tremendous climbs and stunning mountain vistas which is certainly not for the faint hearted.

He leads tours through Thailand’s eastern national parks, then onwards to Cambodia and Koh Chang in the Gulf of Thailand; through Isarn from Udon Thani to Ubon Ratchathani along the Mekong River; and from Chiang Mai to Bangkok. He has even started specialized triathlon training rides working with legendary Ironman Jurgen Zack of Thanyapura and building on running and swimming sessions after the day’s rides!

Amazingly, Martin has led every single tour his company has conducted over the past eight years, clocking up some 22,000km last year alone. Now, at the age of 56, Martin is also approaching one hundred road tours of eight to 12 days’ duration.

Martin is both a pioneer and an inspiration. So much so, in fact, that Bicycling Baz has signed up with him to ride from Bangkok to Phuket starting on December 6, which will be further discussed in a future Blazing Saddles column.

High fructose corn syrup and its effects on health

As fate would have it