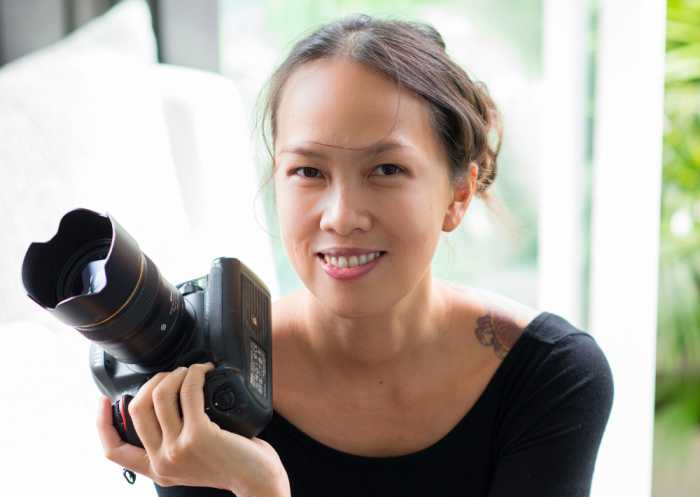 PHUKET: Our lives are rife with twists and turns. Many of us wander down paths which we would never have expected to find ourselves on.

Chiang Mai native Jessi Cotterill hadn’t an inkling that she would one day forgo her English teaching position at Chiang Mai University and ease into domestic life in Chumphon, only to end up as a successful photographer on the island paradise of Phuket.

THE DEPARTURE
With a degree in English from Payap University in Chiang Mai, Jessi landed a position as a basic English teacher at Chiang Mai University. After two years there, she succumbed to temptation by the unknown and was whisked away to the wilds of Chumphon.

“I lived in Chumphon for four years in a small village by the beach. It was very quiet and peaceful. Apart from building a house to live in, I learned things like gutting fish. I went out in the sea with local fishermen to watch them catch squid and was able to mingle with local southern people who are much different from the folks in the north.

“I helped set up a small school for Burmese kids. Life was so easy and peaceful, but this path wasn’t for me just yet – maybe in 30 years, but not yet.

“I started [taking photos] in Chumphon, actually. I bought a camera and would just take pictures of the beach, Burmese kids and dogs.

“There were some journalists from the New York Times who came to the house to interview a man I lived with who was an author, and they brought a photographer with them too. They saw me taking photos and they said, ‘you have an eye for it, you should go for it’.”

Along her travels, Jessi crossed paths with other photographers and photojournalists who hinted at her natural photographic instinct.

A seed was planted but lay dormant for some time.

THE AWAKENING
Eventually, when the house was finished, Jessi got restless. She would take short jaunts to nearby locales and when the draw of wanderlust seized her, the journeys led to farther-flung locations for longer periods of time.

a fish out of water. I kept thinking that I could do more and I wanted to do more, to do something that was more adventurous and would make me proud of myself. The house was finished and the man was satisfied with his writing work there…

“I went back to Chiang Mai to stay in the temple for a monthn not talking to anyone. It was my first time, so I just chose the hardcore one. I thought, ‘Okay one month; it’s okay, I can do it’.

“You have a lot of things inside, you get to know yourself… it’s like a journey but inside your mind.”

Fate led her to Phuket where a friend had opened a bakery and offered her a job, but when a nearby school offered her an English teaching job, she bade farewell to the early bakers’ hours.

“At that time, when the school had some event or ceremony, they would ask me to take photos. I got to take photos of the kids – candid style – for Loy Krathong or Songkran.”

THE OPPORTUNITY
A chance encounter led to her acquaintance with the chef from an upscale restaurant on Surin Beach. “He asked me ‘Okay, how about you come to take photos at Opus One; we have a DJ coming and people partying’.”

Without realizing it at the time, this was a fork in the road that led to Jessi’s current success. The few initial events she was invited to cover paid only in good food, drinks and, most importantly, exposure and networking opportunities.

With ego set aside, Jessi honestly admits that at that time, she wouldn’t have been able to subsist on her photography skills alone – the people who saw her potential and gave her a chance, were instrumental in her current success.

A cascade of events ensued, which led Jessi to ongoing work with Catch Beach Club, Xana and other places for private clients. She was asked to carry out food shoots, fashion and corporate portraits.

Now, Jessi is well-known around Phuket and is often jumping on planes for shoots in Koh Samui and Singapore. A recent contract with a major conference organizer will see her travelling to other far-flung destinations.

She says her preferred subject matter is food, but she has also developed a new-found appreciation for shooting conferences.

“When they are trying to listen to the speakers or they are speaking with emotion, talking, trying to explain things, I love that – to capture that moment.”

Jessi’s philosophy regarding her work is common among those who love what they do in that it is a labor of love.

“I think taking photos is a tool for me to travel, to meet people. I don’t think of it as a job. It’s a skill; you can use it to continue to have the next journey in life.”

Jessi’s subject matter is constantly evolving. She has been gradually diversifying genres – adapting her skills and styles to shoot weddings, engagements, portraits, events and conferences, and still-life projects.

“Some photographers told me I should choose to be an expert in one type of photography, and I tried. Though I prefer food photography, I can’t leave other types behind because it keeps me excited to do something new.

“It’s just like being a baker. You don’t want to bake only cookies, you want to bake cake, bread, and sometimes you get to make tiramisu.”

Boating: Multihulls move on up in Phuket