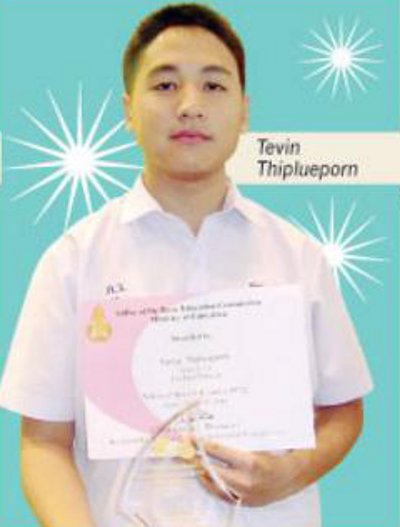 PHUKET: Phuket Wittayalai School student Tevin Thiplueporn was among the winners in a national English-language speech competition organized by the Ministry of Education earlier this month.

Winner of the Matthayom 4-6 category in the National Speech Contest 2012, Tevin impressed the judges with his off-the-cuff speech on the topic:”How to Encourage People to Enhance English Ability”.

“Among tips of effective learning for English, you have to focus less on memorizing and more on listening, reading and getting yourself familiar with words. I have two ways. The first is listening to music, and second is to read some novels, maybe Harry Potter or Narnia,” he advised other young learners hoping to master the international language.

The contest, organized by the Office of the Basic Education Commission (OBEC), proved that students don’t need to go abroad to attain fluency; creating an English-speaking environment in the home was the most crucial element.

So, how did the young students’ parents create such an environment?

Another winner, fifteen-year-old Nantanick Tantiva-sadakarn from the Suan Kularb Wittayalai School in Bangkok, said, “My parents talked to me continuously in English since I was born.”

It was not just English conversations spoken with family members that helped improve their skills; the English-language media also contributed a lot to their development.

Nantanick said he was able to develop a native English accent from watching and listening to the media.

“For myself, my parents have been speaking English with me so I’m able to practice it everyday. And also, sometimes, I watch movies or documentaries in English and from that I started to get the accent so I sound more like a native-speaker than a local.”

“The most important thing is determination. We have to be determined when we practice English. Sometimes, we do it incorrectly, so be patient and keeping adjusting your practice. I myself, have taken years to practice,” he added.

Watanaporn Ra-ngubtook, director of the English Language Institute at OBEC, said 228 winners from 26 contest groups competed in the contest. Its theme was ‘impromptu speech’ in which contestants have an opportunity to practice and develop their ability in English proficiency, thinking skills, public speaking and problem solving.

Also, a survey by the Education First Company has ranked Thai youths 42nd out of a total 44 countries surveyed in terms of English ability.

OBEC secretary-general Chinnapat Bhumirat urged teachers to play the role of facilitators and to give students moral support and encourage them to speak.

Learners should never be made fun of when saying foreign words incorrectly, he said.

Phuket Lifestyle: Paying it forward with a gift that keeps on giving