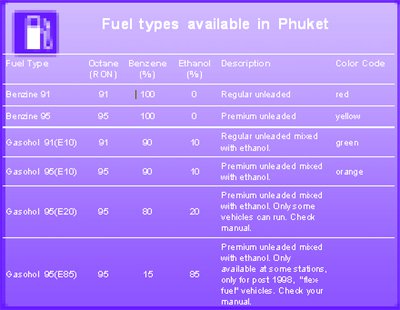 PHUKET: Filling up with fuel in Thailand is a lot like ordering food for the first time in a foreign country – you point to the most visually appealing choice and hope for the best.

The types of fuel on sale in Thai gasoline stations – known locally as petrol pumps – are different to what you’re used to at home. You may well be bewildered by the wide array of fuel choices that are available in Phuket, and you probably wonder if you’re putting the right type of fuel in your car. What makes matters worse is that you can’t even speak Thai, let alone read it.

Wonder no more. The Phuket Gazette has put together a guide to fuels on sale at Thai pumps. Want to know your benzene 91 from your gasohol 95? Read on to clear the muddy waters.

For starters, in Thailand gasoline is referred to as petrol. Americans who insist on using the term “gas” when referring to petrol will run into confusion, since “gas” in Thailand refers to NGV (Natural Gas for Vehicles).

Thai fuels have one of two Research Octane Numbers (RON): 91 or 95. The RON, commonly referred to as the octane rating, correlates with the amount of benzene added to the petrol to prevent the fuel from igniting prematurely, or “knocking”, as it’s called. Your vehicle will have an optimum RON – this should be displayed next to your gas tank fill spout. If you can’t find the RON, check your manual. Happily, most vehicles can run on both 91 and 95 fuels, but you are best-advised to use the fuel with the correct RON.

Benzine fuel is unleaded fuel. It contains benzine – rather than lead – as an anti-knock additive.

Gasohol fuel is a blend of gasoline and ethanol, just as its name suggests. Gasohol is generally cheaper than pure benzine fuels because of government subsidies to encourage and promote domestic production of ethanol.

Building a future in Phuket