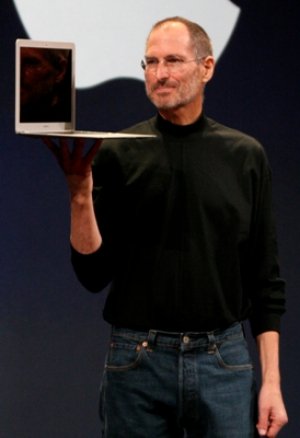 THE filmmakers behind The Social Network are planning a biopic of Steve Jobs’ life after buying the rights to the former Apple CEO’s authorized biography.

Isaacson’s book, the only authorized biography of the tech visionary, was due to go on sale on October 24, but was brought forward after Jobs’ death. It is currently number one on Amazon.com’s Best Seller List.

Marc Gordon, the producer of Speed, Saving Private Ryan, Source Code and 2012 to name a few, will produce the biopic for Sony.

A GREEN beret worn by John Wayne in the 1968 movie – wait for it – The Green Berets fetched a record US$179,250 at a Los Angeles auction last week.

This is the highest most amount of money paid for a movie hat, ever, the Telegraph reported.

Other items fetching exorbitant amounts at the auction were John Wayne’s eye patch from the 1969 Oscar-winning movie True Grit (US$47,800), and his cowboy hat worn in his films Big Jake and The Cowboys which sold for a modest $119,500.

ROBOT boxing drama Real Steel was the movie pummeling the limelight at US box office last weekend, raking in US$27.3 million.

The plot in a nutshell: Robots fight each other instead of humans in a boxing ring.

Expect lots of CGI, some gooey father-son bonding moments between Kenton and his boy and slow-mo in – well – slow but steady supply.

Jackman has been taking a beating for his portrayal of a doting father by American critics, with Chicago Sun-Times‘ Roger Ebert writing: “Charlie is a very bad absent father, and as played by Hugh Jackman, he is actually mean toward his boy.”

THE Inbetweeners movie, a spin-off from the hugely popular TV show, is now the biggest box office comedy ever in the UK, according British media.

The movie reeled in a whopping UK13 million pounds in its opening weekend from August 22-23.

The comedy follows four hapless high school graduates who jet off on their first lads’ holiday on a mission to find loose women, cheap booze and other hedonistic pleasures.

The crude, rude and outrageous Inbetweeners franchise brought record viewing figures for British channel E4 and an unexpected smash hit for all involved.

But beware, the language and vulgarity in the Inbetweeners movie is not for the faint-hearted.

Think American Pie but a lot, lot cruder, and with English accents.

A NEW book encouraging children as young as six to diet has prompted an outcry from nutritionists in the US, the Independent reported.

Maggie Goes On A Diet by Paul Kramer is due to go on sale this month, but is already featured on a number of major bookstores’ websites.

The story begins with an overweight and underachieving Maggie and tracks her battle with the bulge until she is thin and confident and eventually becomes her school football star.

The audience range for the book is reportedly six to 12 years old, a high-risk age in which eating disorders can develop.

Health officials in the US and in the United Kingdom have been quick to slam the soon-to-be-released title as dangerous. Three out of 10 children in the UK and US are overweight according to media reports.

How good is your street?

RESEARCHERS at Massachusetts Institute of Technology (MIT) Media Lab have launched a new website where users compare and grade cities from around the world, the Guardian reported.

The online experiment Place Pulse is a way for researchers to learn more about the factors that people associate with what makes a good, safe and appealing city.

From curbs, pavements, trash and street furniture, users can grade which city they think looks safest, most upper class and most unique.

So far, the site uses images from Boston, New York, Linz, Salzburg and Vienna, and although the experiment is still in its early stages, the results have concluded so far that users are unanimous in their voting for the Austrian cities as the perceived safest.