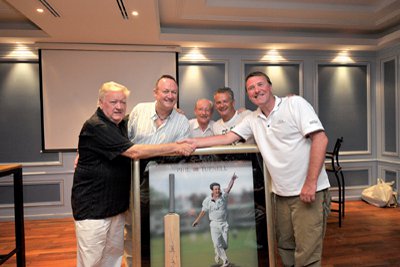 Sport brings many different characters to the table from those who are utter professionals and perfect role models, for the general public at least, and those who are themselves on and off the pitch and exude character and charisma constantly.

Phil Tufnell is one such sports personality whose temperament during his playing career took him from international cricket player to international television celebrity.

“Tuffers”, “the Cat” or “Two sugars” (related to his love of tea) as he is affectionately called is an orthodox left-arm spinner and plied his trade at school where his talent to make a ball turn was noted. Soon after graduating as a quantity surveyor, the young Tufnell was selected as arsenal for the English bowling attack.

In 2003 and at the age of 33, Phil decided to retire from his beloved calling after 42 test matches, 20 one day internationals with 121 first-class wickets to his credit, and a store of experiences to dine out on for years.

Dining out on his career is not quite what Phil has done, but he certainly has capitalized on his experiences and his ability to translate them as humorous anecdotes that draw crowds to enjoy his after dinner charity “conversations”.

As an ambassador for the Absolute World Group, Phil has visited Phuket a number of times and was again here recently with his family when they stayed at The Village Coconut Island.

Last Friday evening, cricket enthusiasts on Phuket and fans of Phil’s current media exposure had the opportunity of enjoying his company over drinks and a wonderful barbecue spread laid on by The Village Coconut Island.

Fortunately, with the help of Chanut Nawnarong, Managing Director of Infinity Communications, the Phuket Gazette was able to speak exclusively to Phil for a few moments before his scheduled dinner date with a room full of admirers.

A sun-tinted Phil Tufnell was asked a few questions relating to his stay and he expressed his enthusiasm at being on Phuket and that he was very much looking forward to making a “few bob for charity”, namely the Phuket Has Been Good To Us Foundation.

When asked about his playing career and most memorable moment, a question we know he’s been asked a thousand times, Phil responded with an answer he’s probably given a thousand times when he said “pulling on the English shirt with the three lions crest is always my favorite memory”.

Not good enough for this writer. So he was reminded of his Man of the Match, eleven wicket haul against Australia in 1997 and did that hold a special place considering the remarks made by Australian batsman, Mark Waugh suggesting that Tufnell was no good under pressure? Phil’s face lit up, and that trademark gully-wide grin was followed by “Of course, mate! That was a special time and to get that bugger out twice [Waugh] in the same match was even better”.

Former cricket umpire and Village Coconut Island executive, Bernie Tebb, sat with Phil over a large beverage and by way of a conversation took us through the highlights and humor of Phil’s career.

It was a window into the changing room exchanges and touring travesties that make up the life of an international player. Many of which would be detailed in Phil’s autobiography What now?, and a few that can only be told at a select gathering.

Bernie asked about his mentors and those players he enjoyed touring with. As Phil said “It wasn’t a good start to my career when I had to share a room with Ian Botham on my first tour abroad”.

Although Phil indicated that Graham Gooch was his most inspirational captain, he felt that Gooch had little respect for him. “We arrived in Australia one year and had to pass through this bug spray at immigration. When we had all gone through I heard Gooch say ‘that stuff isn’t very good – didn’t get rid of Tufnell, did it?'”. Phil did qualify Gooch’s attitude toward him saying it may have had something to do with the 24 bottles of wine he and another player had consumed during the flight.

Bernie then drew Phil to speak about his high profile television career in which he won the reality show “I’m Celebrity Get Me Out Of Here” and described the consuming of large jungle slugs to the effect that very time he passed wind thereafter he expected a butterfly to appear. His lasting advice to anyone intending on participating in such a show is to always bring a chef.

Phil’s appearances on the very popular BBC sports quiz “A Question of Sport” have also given him a household persona and his battles on the show with former England rugby scrum-half, Matt Dawson have become legendary. Phil was quick to mention that he took part in another celebrity reality show “Strictly Come Dancing” in which Dawson also participated. Having politely refused an offer to share a drink with the flamboyant Bruno Tonioli, one of the show’s judges, Phil never received a 10 for his performances, but Dawson, he pointed out, received three – “Go figure that one,” he said with a cheeky smile.

Many more stories were told that evening which carried on into the wee hours before Dawn broke up the remaining few stragglers intent on hearing more of Phil’s tales and banter. Dawn of course is Phil’s wife and it was indeed a pleasure to have shared a glass of wine and hear her stories of how they met and their adventures since. Another time on these pages perhaps.

It was time to leave. When Mr Tufnell returns to Phuket, be sure to take advantage of nights such as that at The Village Coconut Island. There are very few characters in sport that can bring so much entertainment to such a wide audience, but Tuffers is one.

Phuket Lifestyle: One night in Siam