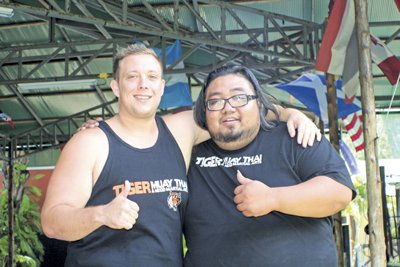 In England there is a children’s TV series called Thomas the Tank Engine about a plucky railway engine called Thomas. In the USA there is another story called The Little Engine That Could.

In Phuket we have our own cuddly DJ ‘Tom the Tank’ who is also bravely puffing “I think I can, I think I can, ” as he sheds many of the nearly 200 kilos he’s been carrying around. We will follow Tom Somsanuk’s transformation over the next few months and in this first installment Marc Mulloy interviewed Tom and his trainer James Mason at the Tiger Muay Thai camp to understand the why and how he came to this courageous decision.

PHUKET: Tom greets me with our traditional bear hug as we meet in front of the Tiger Muay Thai Gym. He is a very huggable guy but lately there is too much bear in that bear hug and Tom wants to lose weight. His coach, James Mason, who himself once weighed in at 230 kilograms, is living proof that it can be done.

James had let his formerly healthy life-style lapse until he became so obese that a doctor gave him five years to live. This was a defining moment and he came to Thailand in 2010 and joined Tiger Muay Thai. Now two years on, he is an inspiration to others.

Tom is one of those inspired. Like James, he had his defining moment when his own mother needed to be taken to the hospital after a seizure, and he was unable to lift her due to his own weight issues.

“When I knelt down to pick my mother up, I couldn’t breathe even though she weighs so little. This is the most important person in my life, and I couldn’t lift her up – that’s horrible. Luckily my neighbors were able to help, but it made me realize that I need to lose weight,” says Tom.

“I’m proud of being a DJ but I’ve worked some pretty odd hours for over the last fifteen years, often eating at four in the morning. It’s hard to get healthy food at that time in the morning.”

At 37-years-old, Tom’s weight was 195 kgs and despite an active life-style, he had begun to feel the symptoms of being overweight: breathlessness, poor circulation in his legs and a slowness to heal.

Meeting James Mason who has now successfully lost over 130 kgs at the Tiger Muay Thai gym was the turning point for Tom. “James weighed 175 kgs when we met at a barbecue beatdown and was still shedding the weight. Seeing James, who is eight years younger than me, burning his huge, old clothes was an inspiration to me.” says Tom.

“When Tom had his first workout he struggled to walk 200 meters, now we’re walking 2.6 kilometers together, and at his workout this morning he’s done 200 high-knees on a crash mat, 75 ball slams with a 7kg medicine ball and 30 bicep curls with light dumbbells. In two months Tom has been able to lose 9.5 kgs. Working with Tom also inspires me to keep going as I want to lose another 20 kgs” says James.

Apart from the exercise, James explains that diet is crucial to weight loss, representing 70 per cent of the effort. Starch and carbohydrates are now off the menu for Tom, who looks to James for guidance.

“For me, it’s vital he’s here” says Tom. “It’s not that I need someone to tell me what to do, but I do need someone to guide me, who has been there. I get emotional so I need to be with someone who knows what I’m going through. I feel really lucky to have this opportunity and will do my best to do something good for myself. The food is a problem. It will always be there but it’s like going out with an ‘ex’ that you know you shouldn’t be going with. It’s a familiar place, used to be a friendly place, but you know it will turn out bad. Thanks to the many people I have met recently, I am on the right path now.

I’ve never been this conscious of what I eat before. I now eat lean chicken and Issan food like Som Tum, grilled fish and as many vegetables as I can handle. But I have to keep off the carbohydrates. In the past two months I’ve cut back about 90 per cent on sugar and carbs but I have been eating some, again because of my life-style I break down now and again.”

James is understanding but adds: “That’s fine for some people who are ten kgs overweight but for us obese guys, we really have to cut out the carbs. Before your body uses up the fat stored as energy it will burn up carbohydrates, but if you keep topping the carbs up, then the fat will stay in reserve. Every six weeks he can have a ‘treat meal’ but only one meal and only in six weeks.

He also needs to break his snacking habits and if he needs a snack he can eat fruit or nuts. Water helps a lot and often the feeling of hunger can also just mean that you’re dehydrated. I now drink 5 to 6 liters of water a day.”

Tom admits that despite the hardship, he is feeling the results. “It is not all about weight it is about health. I do feel better; when I get up from the floor it doesn’t take so long; when I go up stairs, I don’t feel so bad – it’s all the little things that together make me feel better about myself. I don’t want to be a super fit guy, I just want to be normal. My goal is to be about 120 kgs.”

The Phuket Gazette will check back in on Tom in a few weeks and keep our readers informed. In the meantime, it looks like we’re going to be seeing less of Tom around.
And that’s a good thing.