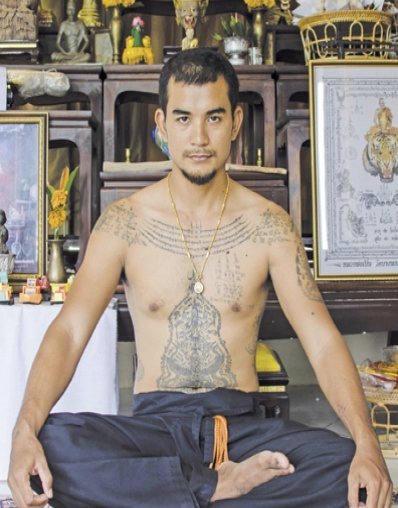 PHUKET: The young tattooing master, Charn Ditkajan, exudes an air of grace and calm authority. He has just performed a four-hour-long tattoo inscription for an Italian gentleman, but shows no sign of fatigue.

“I silently chant mantras during the session to keep me focused and restore my energy,” he explains with a distinguished Supanburi accent known among Thais for its association with rural folk.

But Charn doesn’t seem to mind, and it’s not surprising to see why he is proud of his roots: Supanburi (along with its neighboring Ayudhaya) is long regarded as the hub of traditional art forms, be it music, martial or performing arts.

Known affectionately as “Kru Pong” by all and sundry, Charn, 34, is a practitioner of two ancient disciplines: sacred tattooing and the ancient martial art muey Chaiya. However, he remains humble about his status.

“I am not a master, just a practitioner of these noble crafts,” he says. But many, who regard him with respect, will refute that statement.

As a young novice monk in Supanburi temple, Charn remembered being fascinated by the Buddhist amulets the temple produced for its parishioners.

“Sacred tattoos are regarded as protective charms that you literally wear on your skin. Originally they were inscribed on the bodies of ancient warriors who only had swords and bare hands as weapons.”

Today, in a relatively peaceful time, sak yant is still popular among Thais, who believe in its potency to protect and attract wealth, love and career advancement. Apart from Khmer inscriptions, which form the backbone of sak yant, designs also include religious
iconography, mythical animals and Hindu deities.

But, as Charn points out, sak yant is only one part of the picture. The “wearer” must observe certain moral rules of conduct for the tattoos to work.

“In a way, sak yant teaches people how to be responsible individuals, indirectly that is.”

Studying under a renowned tattoo master, Charn learned that sak yant was not just a matter of putting ink on the skin, but a craft in which the spiritual aspect played an important role.

Thus following the rules religiously, Charn became well versed in mantras and meditation, both of which have become an indispensable part of his daily life.

Charn’s foray into the ancient art of muey Chaiya happened during his university days in Bangkok. According to him, it was part and parcel of becoming a true master of the sacred tattoo.

“I chose to practice muey Chaiya over other forms of Thai boxing because I don’t like ring fighting. Muey Chaiya is more of a self-defense and a vigorous and graceful form of exercise.”

Charn has been practicing muey Chaiya for over ten years now, applying the same rigor he used with learning sak yant – with unwavering commitment and consistency.

At present, he holds a six-day weekly class of muey Chaiya at Sukho Spa on Chao Fah West Road. As a resident tattooing master his book is filled with appointments with expats and Thais eager to adorn their bodies with this intricate art.

“Both Muey Chaiya and sak yant are traditions I’d like to pass on to my children and thus create some sort of lineage before the practice is lost out of disinterest.”

As a father of a young toddler, he may not have to wait long before his son follows in his footsteps.