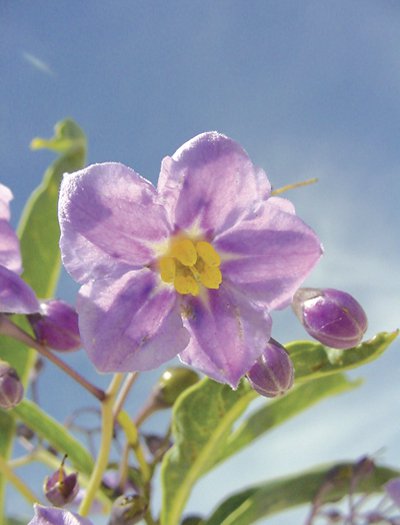 PHUKET: I am aware that it may sound heinous, but having given the matter some thought, I don’t believe the tropical gardener should be too preoccupied with the hazards of poisonous plants.

After all, only a few, such as the lantana, have toxic berries or fruit.Take the allamanda cathartica or ban burii. One of the best of all tropical climbing shrubs, with its dazzling golden trumpets (there is also a less vigorous and dramatic purplish-pink variety), it does possess toxic sap.

But, who would want to munch the glossy but leathery and bitter tasting foliage? And in any case, although it can produce prickly, oval seed capsules as a second line of defense, cultivars rarely have them. Certainly, mine have never gone to seed.

Thetabernaemontana cumingiana is another culprit with poisonous parts. Unsurprisingly, and in common with the harmless looking desert rose, whose sap is used by Africans as an arrow poison, it is also a member of the apocynaceae clan.

It is increasingly popular in dwarf form, often grown in a container, where its neat, bushy habit, deep evergreen foliage and dainty, white pin-wheel-shaped flowers are a decorative and fragrant addition to any terrace or patio.

The solanum family is even larger – some 2,000 species strong – and includes such unlikely and edible bedfellows as the potato, the tomato and the eggplant.

However, many species are dangerous if ingested, especially the nightshades so familiar to most westerners.

Neither the red-berried woody nightshade nor the purple-black berried atropa belladonna – both contain tropane alkaloids – is found in South East Asia, but there are plenty of tribal members to take their place.

They tend, however, to be less toxic and more decorative: witness the Chilean potato tree (s.erianthum), which has beautiful blueish-purple flowers with large yellow stamens. Beware of the yellow berries as they are harmful.

My potted erianthum has not yet flowered; indeed it is much less vigorous than a twining variety known as the giant potato creeper.

On my Spanish patio, one of these vines outgrew everything else, save a purple bignonia.

Thus far, I have tried to balance out the visual delights of these plants against their known dangers. But, it’s always worth remembering that most of these fellows have known medicinal properties.

Many have long been employed as folk treatments for ailments: the alkaloid solanine extracted from the potato tree has been widely used as a purgative and as treatment for skin diseases.

Allamandin, a chemical derived from the yellow allamanda, has known cathartic properties (hence the botanical name); tabernaemontana is proving to be an exciting pharmaceutical prospect – extremely rich in chemicals called ibogaines.

Long used by South American natives as a psychedelic substance as well as for eye injuries, it is now being developed as a new-style painkiller, a treatment for dementia, and even to fight heroin addiction.

But, things get ever more complex. As remarked before, most plants are either edible or not trustworthy as food. Some are both.

Cassava, a staple of Asian cuisine, contains poisonous glycosides which are only destroyed by cooking – as in the case with the humble kidney bean. And the toxic berries of the potato tree are harmless when cooked in curries.

The leaves of potatoes, tomatoes and rhubarb all contain harmful solanine; so too the green flesh of potatoes left in the sun. Even the avocado–one is now four meters high in my garden – has not only poisonous leaves, but toxic skin as well.

But I guess if you really want to finish things off, you might do best by taking a seed or two from the Indian “suicide tree” (cerbera odollam).

A couple will apparently do the trick, though you might have trouble finding it here.

Tip of the week
Any of the palms listed last week can be found indoors, gracing reception areas, offices, or drawing rooms.

But there are others, which are perhaps more suitable, mainly because they are understorey plants, capable of existing in areas of low humidity and indirect light.

One,the lady palm (rhapis), is perhaps best of all as an interior ornamental.

The two most common species are excelsa and humilis. Its multiple narrow, stems, covered with dark fibers, are surmounted by attractive and deeply divided leaves split into frond-like segments.

Slow-growing and sturdy, rhapis will, in time, produce suckers which will develop into additional slender stems.

It is thus ideal for a situation with limited light and space where, in a container, it will reach no more than six feet.

Some fine potted specimens are thriving outside the Wattana Hotel in Karon.

Phuket Lifestyle: It’s fun to eat at the ACYC