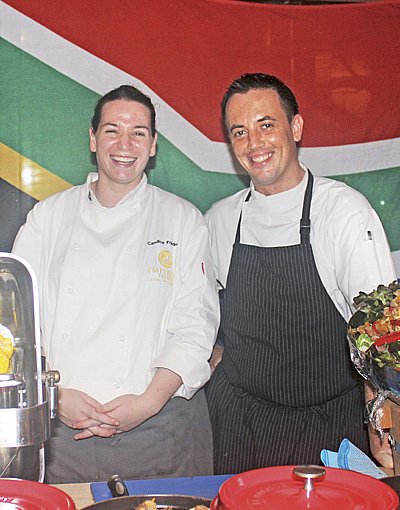 PHUKET: Few things can tell someone about another culture or country like its food. Italian food is full of flavor and body. American food comes in large quantities and fills you up. Thai food is spicy with intricate details and layers.

If food is indeed anything to go by to get a sense of culture, then the South African Food and Wine Expo, held at the RE KÁ TA Beachside Restaurant in Kata, hit the nail on the head by offering its patrons a taste of what South Africa is all about.

The meats off the braai – Afrikaans for barbecue – on display were hearty and in abundance. The wines were full of form that had people reaching for more and the aromas and atmosphere that filled the air truly had an Ubuntu feel to it.

In attendance was HE Ruby Marks, the ambassador for South Africa to Laos, Cambodia, Myanmar and Thailand and she had nothing but praise for the event.

“This is all wonderful. It really is and I feel so proud to be a South African and am truly overwhelmed by it all,” she said, clearly gushing with pride.

“The Thai palate is a refined one and open to new tastes and experiences. South African food is perhaps something that many people have not necessarily tried before and, therefore, I am excited that we can introduce them to it.”

Foods such as biltong: a jerky- like snack that is salty and rich. Boerewors: a spicy, juicy sausage slowly cooked on the braai. Chakalaka: an accompaniment to all dishes consisting of beans, chilies, carrots and an assortment of spices and herbs.

And, of course pap: porridge-like meal made from ground maize, with onion-and-tomato gravy that fills every bit of spare room in your belly.

Then there is the wine. Like any proud, rainbow-blooded South African will tell you, wine from the Western Cape region of the country is up there in terms of quality with the very best from around the world.

Don’t believe me? Here’s what Monsieur Georges Ciret, the wine director of the Boathouse had to say: “South African wine is special. It has flavors that separate it from the rest of the world and, if anyone is curious enough to try some, then they will soon realize that wines from the south of Africa can hold their own against anything from France or other countries.

“South African wines are fruitier than other wines and this is unique to the country. Robust grapes give it more body, which accompanies the hearty, meaty food of the country.”

This combination offers those who are curious and the adventurous something uniquely African, which is a taste that is gaining popularity around the world.

After the 2010 FIFA World Cup, the world’s eyes have often found themselves gazing in the direction of South Africa, and its rich history and amalgamation of flavors and cultures shine through in the food and wine on display.

Head chef Bryan Berger is a South African expat who has been living here for seven years and is overjoyed to be able to share a little bit of home with people from all over the world.

“Food brings people together. It is a great unifier,” he says, while dishing up a generous helping of barbecue pork ribs off the fire for an Irish couple.

“In South Africa we have so many cultures and languages and people all coming together and mixing it up and that is reflected in our food. In one meal you can have curries from Durban, fruity sauces from the Western Cape or large servings of beef and lamb from the Karoo or the Free State.”

This mix of flavors and cultures is perhaps the defining feature of South African cuisine.

The country’s history is well known and documented. A radical past has shaped the landscape and thrust different ideologies and beliefs into a great melting pot and stirred them all together. The end product is something that Ambassador Marks believes is something to be proud of.

“We have so much to offer the world and, for a country that is still in its infancy [only 18 years old] we really are a shining light.

“In terms of produce, we have it all. Our weather is conducive to producing top quality ingredients and we are already looking into exporting our citrus products to Southeast Asia as well as our unique tea called rooibos [red bush].”

So, if you are looking for a spice that’s lekker and aren’t afraid to risk a babbelas, then why not try some South African flavors that will definitely have you screaming, “Ayoba mzanzi, Ayoba!

Phuket Dining: The other Kiwi juice