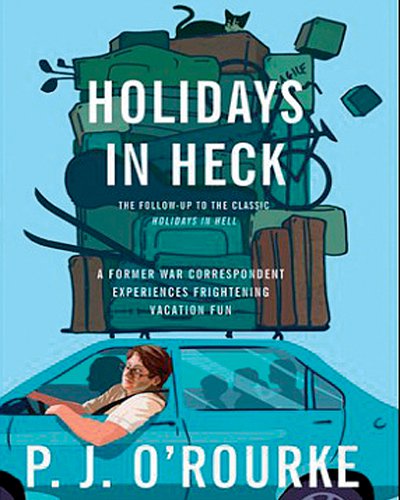 PHUKET: The 1960s were Tom Wolfe’s decade, the stage upon which the founder of the New Journalism strutted with The Electric Kool Aid Test.

The 1970s belonged to Hunter Thompson and the Gonzo journalism of Fear and Loathing in Los Angeles. Wolfe eventually turned to turgid meta-fiction and Thompson to shameless potboilers.

But the 1980s saw the rise of P.J. O’Rourke and his globe-girdling Holidays in Hell in which he wrote about El Salvador, Gaza, Belfast, the Philippines, et al.

Formerly a writer of broad burlesques for The National Lampoon, O’Rourke’s breakthrough was a huge gut-busting travel article for Harper’s about his descent down the Danube on a Soviet cruise ship packed with old, obtuse American lefties. This established his signature style of satire from the Right.

He followed this up with his Iraq war reportage in Give War a Chance but then gave up on war for armchair pontificating.

He as much as acknowledges this slide into domestic mediocrity with the title of his most recent book, Holidays in Heck (Atlantic Monthly Press, New York, 2011, 265pp), subtitled “A Former War Correspondent Experiences Frightening Vacation Fun”. Here the stars are his wife and his three small children and what they did for fun at home in New Hampshire and on trips to Ohio, Washington D.C. and Hong Kong.

While his former methodology was to put himself into a horrible foreign situation and write something funny about it, now he strains for humor from the mundane. It’s a big come down.

Still, he hasn’t lost his sense of humor entirely. He has great fun with the rich, whether they are foxhunting in England, quail hunting in South Carolina or travelling with a Republican tour group to the Galapagos Islands. Here is his reflection on Charles Darwin’s historic visit aboard the Beagle.

“Anyway, when the Beagle arrived in the Galapagos, Darwin – perhaps after a heavy lunch of giant tortoise and beer – formulated his theory of evolution, which may be restated for Republicans as: If you’re slow and edible and I have a gun, the situation will evolve.”

And the piece on foxhunting allows him to slip in the line: “There are no atheists in foxhunts.”

And on the subject of quail hunting, he mentions that his wife regards birds as “air lizards, icky velociraptors in bad boas.”

“I, on the other hand, love birds. I spend a lot of money every year and travel thousands of miles for my love of birds. I trudge across acres of muddy fields, push through tangles of forest underbrush, and hunker in swamps at dawn simply to find birds – and kill them. Call it tough love.”

But most of this book is just shameless filler served up from paid junkets, puff pieces on the new Airbus A380, the aircraft carrier Theodore Roosevelt, the tourist island of Guadalupe. He excoriates the bad art of the Venice Biennale but this is too easy, it’s like clubbing baby seals.

Incongruously enough, sited in the midst of all this drivel are three superb pieces of reportage based on trips he took to China and Kyrgyzstan in 2006. He does much of China on riverboat and Kyrgyzstan entirely by horseback.

“Not only didn’t I know what I was doing, I didn’t know where I was doing it . . . Even by the standards of outer space, Kyrgyzstan is remote. If something happened to my horse it would be shot. For me, the medical treatment wouldn’t be that sophisticated.

“Furthermore, there were blond hairs all over my clothes and luggage. How would I explain this to my redheaded wife? I had a love affair in Kyrgyzstan. Not only that, but with a male. His legs are beautiful. And he has four of them.”

Four years later, he travels to Kabul in “The Seventy-Two Hour Afghan Expert”. Here he does what every fly-by hack does and stitches together a dozen interviews into a glib story. For the real story you’d have to ask real war correspondents like Dexter Filkins and Sebastian Junger.

That P.J. O’Rourke has retreated to plush domesticity is his choice, but the books he writes suffer accordingly. I miss the old O’Rourke as seen fleetingly in China and Kyrgyzstan.

Phuket Lifestyle: The perfect steak out