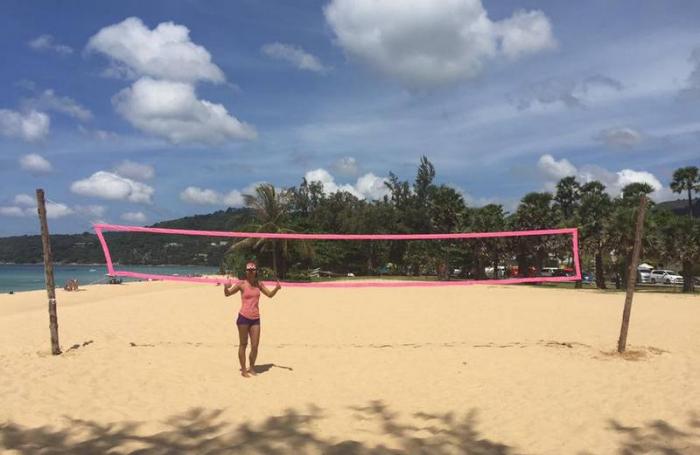 PHUKET: If you have recently wandered along Karon Beach in the late afternoon, you will have seen a considerable number of volleyball courts stretched across the sandy lot between the road and beach.

No, it’s not an international tournament coming to town – that was last month – this is the daily beach volleyball games instigated by one of Thailand’s top players, Yupa Phukrongploy.

Now 34 years old, Yupa’s pro career took her around the world. She represented Thailand on the beach volley courts of Asia and the Americas, and brought home a wealth of gold and silver medals.
Introduced to the indoor version of the game by her sister, she fell in love with volleyball at the age of ten. But it was her elevation at the age of 15 to Thailand’s volleyball Dream Team – under the stewardship of legendary Thai volley coach Kiattipong ‘Ott’ Rachata Kriangkrai – that set her on the sandy path to the beach volley courts.

“I want to thank Coach Ott. He helped me join the Dream Team when I was 15 years old and he was the one who suggested that I try beach volleyball – because I’m so tall. So, I gave it a try, and I’ve been addicted ever since,” Yupa says with a smile.

“Beach volleyball is quite a lot harder than indoor volleyball because its harder to move fast on the sand. We have to play under the sun on big fields with only two players per team, instead of the six-player teams I was used to for the indoor volleyball matches,” she explains.

“Even though it’s hard, it was the challenge that interested me. And that’s why I love it.”

Originally from Kalasin, in the Northeast of Thailand, Yupa now calls Phuket home and is endeavoring to share her passion for beach volleyball with anyone who happens by the courts she has set up with permission of the local authorities in Karon.

“I played for the national team for 12 years, but when I retired I still needed to play for fun. That’s when I came up with the idea of setting up these courts on the beach in Phuket,” she says.

Karon has been the beach of choice for volleyball tournaments over the years, hosting both FIVB events and the recent pro-am Volley Fest, so it was an easy choice for Yupa. The local authorities were also accommodating to the idea of the star player bringing some fun back to Phuket’s beaches.
Yupa plans to pay back the local council’s support for her project by giving local youngsters the opportunity to discover the joys of the game in the same way she found them.

“My main purpose for setting up these courts is that I want others to experience the fun of playing and also to understand what a great place Phuket is for playing – it’s good for training, as well as staging matches and tournaments.

“I want players from other countries to come here to practice, which will be great for Phuket’s reputation.”

Profile: Volleyball’s dream girl gives back to the community