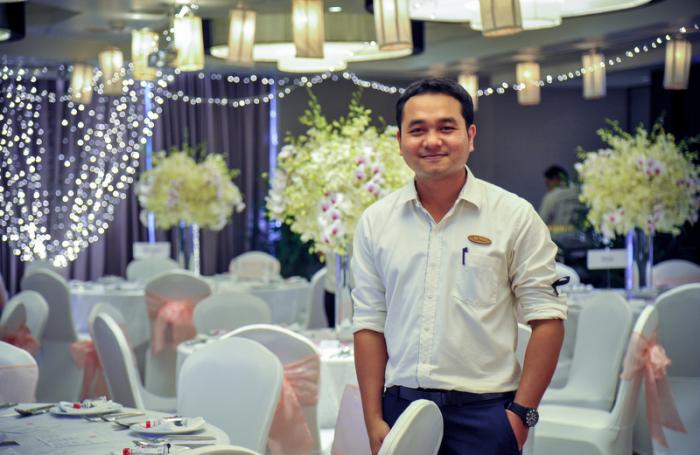 PHUKET: Watcharapong Saikaew, or Pom, as he is better known, is the Assistant Director of Events at Angsana Laguna Phuket and the first Certified Meeting Professional (CMP) in Thailand.

With a lucrative career and a four-year Hotel and Tourism Management degree from Prince of Songkla University under his belt, he is a proud flag bearer for the Banyan Tree group, which is also where he started his career years ago.

He became interested in the certification after he saw the letters ‘CMP’ in the signature of one of his American clients.

“I became curious to see what it meant and so I did a bit of research and found that it is one of the most respected certifications in this field worldwide. The requirements were at least 3 years of professional experience, a 25 hour certification course and an examination,” says Mr Pom.

“No Thai body offered the course at the time, so I took it up with the TCEB (Thailand Convention and Exhibition Bureau) at every opportunity I got. The TCEB is a state enterprise, but managed independently. It seemed hopeless, and taking the exam in Singapore or the US was a very expensive option.”

One of the goals of the TCEB is to develop human capital so as to have enough educated Thais in this field.

“An event management course was introduced a few years ago at some universities in Thailand. Even though it’s a global field, the subject is less than 30 years old. Additionally, there is no standardization,” he says.

In July last year, a department under TCEB, called the ‘MICE Capability Development Department’ offered the course for the first time.

“The TCEB formed a boot camp and flew in a trainer from the CIC (Convention Industry Council), a group of professional organizations and associations working in the field of meetings and event management. Most of the participants were industry experts, some with more than 30 years of experience, but they all had to go through the classes to get this credit in order to apply for the examination,” says Mr Pom.

After attending a four-day course with 60 participants, Mr Pom waited for his ‘clearance’ to come through, before enrolling for the exam.

“After the course was done, they checked our resume and background. Once I was given the green light, I enrolled for the first sitting, which was being held on November 4. I studied all the material cover to cover, as we had been advised to do. The exam was very tricky – not only are you unaware of which questions count toward your final score, but each question has a different, and unknown, weight,” he says.

Additionally, you cannot simply use your prior experience to answer the questions – you need to have a thorough knowledge of international standards, which you can only gain by studying the material,” he adds.

Mr Pom says he chose CMP for his own development, but it will also help set a positive example for other professionals and improve the overall image and competitive advantage of Thailand.

“However, I also feel a little pressure because I have to make sure I maintain the standard of my work. It has given a good image to myself and to my company, but it has also pushed me into the spotlight,” he says.

At Angsana, he handles all kinds of events, but specializes in Indian weddings. His loyalty to the Banyan Tree group, where he has held several positions throughout the course of his career, is easily understood.

“They invest a lot in developing the careers of their staff. At most workplaces it’s just talk, but not here,” he says.

“I would love to go to Japan if I had the chance, but there are many amazing locations to photograph in Thailand itself,” he adds.