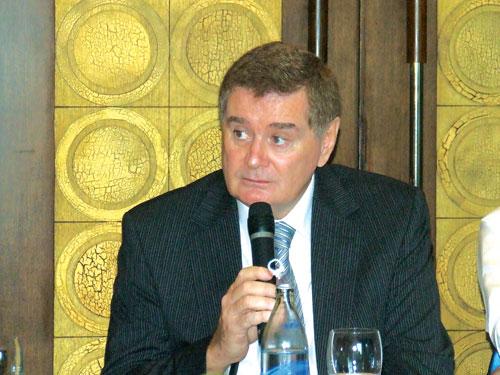 PHUKET: Australia’s Honorary Consul in Phuket, Larry Cunningham has announced that he will resign his post on September 30 after nine years on the job. During his time as Honorary Consul, Mr Cunningham has been a consistent and outspoken critic of the corruption and criminality facing visitors to the island.

In an interview with the Phuket Gazette he said that he was threatened by a government official for his vocal criticism recently, but rather than be intimidated, he has renewed his call for authorities in Phuket to face up to reality of corruption and criminality that is degrading the island’s international reputation as a safe holiday destination.

“Last week I was threatened by a government official – she told me ‘you be very careful, because you have a business in Phuket and you live in Phuket.’ Now that was a terrible thing to say, and there’s going to be a lot of problems as a result of what that person said.”

He also said that given his recent experience, finding his replacement may prove to be a difficult task. Maybe nobody wants the job. The last few days in particular have shown that the Honorary Consul’s job in Phuket can be a very difficult one.

“When you get threatened by a government official, it’s not a pleasant experience. So maybe we won’t get anyone to apply for the job.”

“Those sorts of things are very disappointing when they do happen, because as everyone in Phuket who knows me knows, I have the best interest of Phuket at heart.

“I have a resort in Phuket and I want people to come to the island. But Phuket has been slipping and sliding for the last ten years. The quality of tourists coming to Phuket now is lower than it has ever been.

“We have pollution, corruption, the highest taxi prices and tuk-tuk prices of anywhere in Thailand. We have aggressive assaults by tuk-tuk drivers, and taxi [drivers] and jet-ski operators and so on. So I think Phuket has a big chance to improve itself with the DSI, if the DSI do really make the changes that they say they will make.”

While acknowledging that all visitors must respect local laws and customs, Mr Cunningham also expressed his concern at the rising number of Australian tourists that are affected by these problems.

“Now unfortunately some of these Australians behave badly and get into trouble – they do stupid things, they get drunk, they start fights – they steal things, they do things that are impolite, and generally speaking [when they do] they are arrested by the police or taken to jail.

“When that happens, I check with the police that everything is okay and that they pay their fine(s). If they come to Thailand they have to respect the country they come to and they should behave themselves. If they do bad things like that, they’re very silly and they don’t get a lot of sympathy from me.

“Unfortunately sometimes they are taken advantage of when they only do some small things and this is where I get upset and angry. Australians are extorted of money by corrupt police and officials in Phuket. Specifically in situations like jet-ski or motorcycle hire, where the damage is fake. Or where there is no damage or where the cost of the damage is just so very high that it’s not in keeping with the real damage that was done.

“Now when that happened, I have had to make sure that the Australians rights are protected and they are not ripped-off and extorted for money. Unfortunately I don’t get to see all of them. Some of them do not know that we have an Australian Consul here, and we only find out about the stories later.

Mr Cunningham went on to say that tourists from all countries have similar experiences and that such incidences played a large part in the declining numbers of European tourists visiting Phuket.

“I hope that we will be able to see a new start for Phuket, because Phuket has just dropped and slided away in the last few years – the European tourists have stopped coming because of the problems in Phuket.

“Unfortunately many of the officials in Phuket want to keep quiet about the problems but if you keep covering up these problems nothing is ever done to improve them.

“You would be much better [off] investigating and trying to fix the problems, and then [be able to] say to people ‘we have fixed the problem, here is the new Phuket, taxi fares at a sensible level, no more development, no pollution, no rip-offs by jet-ski operators, no extortion of money by police.

“If we had these situations you could then say: ‘okay, sure we have had problems in Phuket, but now we have fixed these problems – this is the new Phuket. Please come back and give us a chance’. In the hope that the European tourists would come back to Phuket.

Despite his criticisms, Mr Cunningham said he still loves his adopted home and remains positive that things will change for the better.

“Phuket is a wonderful place, it has been my home for the last 12 years. I have some very, very close friends in Phuket. Friends in the police force, friends in government, friends in the Phuket tourist association, fellow Honorary Consuls here in Phuket – my friends are probably 70 per cent Thai and 30 per cent non-Thai.

“It has been these Thai people, my Thai friends, who have been encouraging me to work with them to make Phuket a better place. So even though I will no longer be in an official position, as Honorary Consul, my heart is still in Phuket, because I believe Phuket can be better, much better, than what it is now. But it needs strong action, hopefully starting with the DSI, and hopefully followed through from Bangkok.

Venturing into the unknown: reflections by Don Battles