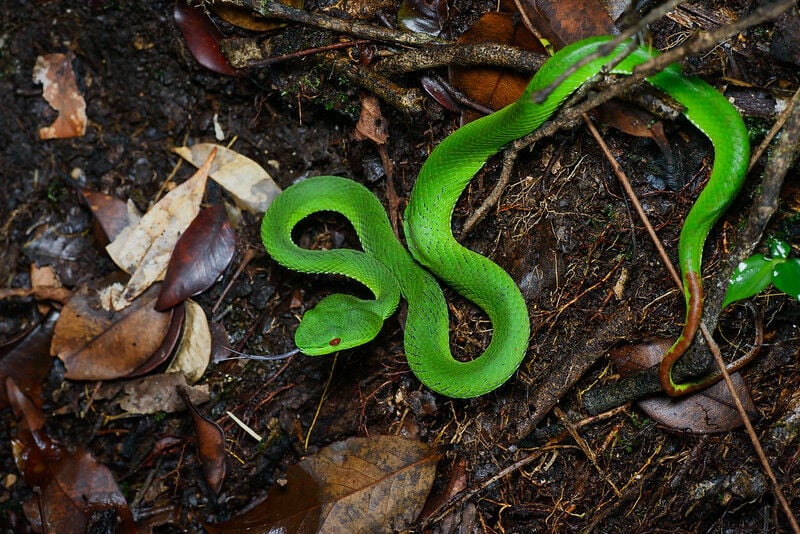 The following story was written by Amy Sukwan, an American who has been living in Thailand for 7 years.

“Mommy, there’s a snake!” my 8 year old daughter Eliza said, waking me up in the middle of the night.

I came out of our modest bungalow in Phuket at some unholy hour in the middle of the night, to see what my daughter’s whole “snake” thing was about. In the light of our front porch light, about 3 metres from our front door, 3 of our cats were surrounding something that looked at first to me to be a stack of rotting bananas.

“Eliza it’s nothing.” I tried to assure my daughter. Right at that moment the rotting bananas rose up into an aggressive posture as 3 cats circled it, hissing viciously. It was a surreal sight in the porch light.

“Mommy can you kill it!” My daughter begged me, as the thing, about four feet or over a meter long, lashed at one of our cats, who was quick enough to jump away. The snake had a big head that I could see in the porch light. It was distinctively mallet shaped, in what I was pretty sure was the viper class.

As much as I wanted to go back to sleep and pretend that this was all a bad nightmare, I now had a crying, frantic daughter who was terrified for her cats and a situation that I was quickly recognizing was pretty bad.  Mai dee.

I needed to call in backup – my Thai husband. Eliza was already screaming his name. “Ka! Loon Ka!” My 8 year old screamed.

There are many venomous snakes in Thailand.  Most people know about cobras but the viper class is the most deadly in the world, as vipers are both unpredictable and very difficult to charm. I was looking at a pit viper of some sort, I was pretty sure.

Snakes normally don’t bother you if you don’t bother them. But interactions are most common late in the dry season in Thailand, as it is now, in late March, as the snakes slither around houses in search of water. Thais don’t want them around for obvious reasons. You don’t want venomous snakes to breed and make babies close to your homestead.

If you are not sure if a snake is venomous or not, a good rule of thumb is to look at its head size in proportion to its body size. If the snake head is close to the same size as the rest of its body, and the snake is generally more wormlike in appearance, it is probably not venomous. If the head is large, say two or more times the diameter of the body, it might be poisonous.  This does not constitute medical advice. If you get bitten by a snake, you should go to the hospital.

My husband woke up as Eliza was screaming for him. He came out groggily but as soon as my daughter pointed at the snake he saw the problem. “No good! I kill!” Ka said as he grabbed a machete from our kitchen rack. He wasted no time in coming to this decision.

So after being bathed in the surreal sight of three cats circling a hissing, striking, and very likely deadly serpent under our porch light, I got to be treated to an even weirder view. Ka went full Steve Irwin on the snake as he danced around with the machete. The viper sideswiped and tried to strike him. Then, it suddenly backlashed and made contact with his knee. Both me and Eliza cried out from the sidelines.

“She bit me!” Ka said as he macheted the viper’s mid body, and then its neck. Among my many shortcomings is a complete inability to gender snakes. So I will remain with my husband’s classification of the viper as female.

The snake stilled over the course of several minutes as my eight year old screamed in terror. It still seemed to be wiggling even five minutes later, though its body slowly stilled. Ka helped me put it in a plastic bag.

“You go hospital now!” I screamed at him.

“No worries. She don’t bite me with poison.” Ka seemed sure of this. He’d grown up on a 50 rai spread of backwoods in Phuket and was something of a designated snake killer.

My husband had tracked and killed a 5 foot long snake months before, which he had assured me had no poison, but which he had not wanted around the house. I was able to identify that one through Google images and a snake discussion group as an Indochinese Rat snake, which was indeed not venomous.

There was only one bite mark on his knee the viper had come in from an unusual angle and only one fang had punctured through. But I could see from closer inspection of the now dead snake what I had already known. It looked like a dark green Pit Viper. She was about 4 feet long, or maybe 130 centimetres. The poor girl had probably been looking for water.

Symptoms of a poisonous snake bite include pain at the site, swelling, and changes in heart rate or breathing. Needless to say Ka is still alive and well, and probably had enough experiences of snakes to know that this was a dry bite, or one without venom, as about 50% of snake bites are. I wouldn’t have taken my chances on this, though.

The reason that poisonous baby snakes are thought to be more deadly is not because they have more venom, but because they always release venom when they do bite. I prayed in Buddhist style for the snake to have a better life next time, as she had made merit by not killing either our cats or my husband. But for the amateurs out there, I wouldn’t advise going to Steve Irwin about these things. Normally snakes bite you because you bother them.

It turns out that sometimes you chase the story. And sometimes the story chases you.

I’d seen a recent post on The Thaiger asking for guest bloggers to share their stories regarding Thailand. I think I laughed out loud on reading it. After 7 years in the “Land of Smiles,” with 2 Thai husbands and after giving birth to 2 children here, I’d like to think I’ve seen it all. I probably have 10,000 stories.

But what do I want to write about? Should I mention my early days as a farang in Thailand, during the time when I was working as an OPC for a timeshare? Do I want to give advice on making visas, as an American staying in Thailand or for a Thai going to America? Should I talk about going to Thai hospitals? Or maybe I should write something about Thai Buddhist funeral proceedings? I’ve put my first husband and both my mother and father in law in the ground at Wat Prathong. Should I talk about ASQ and travelling during Covid madness? Or should I mention the Full Moon Party on Koh Pha Ngan? I’ve been to five of those, personally.

This weekend I was harvesting cashew fruit with a Thai friend of ours in Phuket who has a large spread of family land. We burnt the cashew nuts, and I thought that this would make a great story, as many farang ask me about growing and harvesting practices in my little outback area. Unfortunately a quick Google search revealed that cashew nuts are dangerous, even to people without allergies, as they contain a chemical close to poison ivy. Only professional processors should deal with cashew nuts, in short. I’ve been eating the fruit and burning the nuts for years. But I gathered that life is too dangerous. So much for that story.