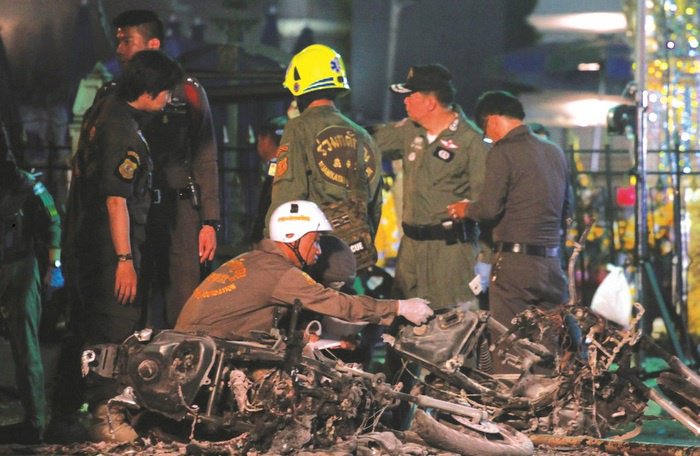 PHUKET: The Erawan Shrine is a revered place of worship located in the heart of Bangkok. Flanked by some of the capital’s best malls and five-star hotels, the shrine is frequented by hundreds of Thai and foreign devotees every day. On a typical day, the shrine is crowded with people who come to offer their prayers. There is a thin haze of smoke that lingers permanently from the burning incense sticks. Outside the gates of the shrine, vendors sell flowers, food, incense sticks, even caged sparrows. The sparrows are sold to devotees, who set them free in the belief that this will bring them good karma.

On most days, a troupe of traditional Thai dancers can be seen performing in front of the statue of Brahma, the Hindu god who created the universe. To many, the Erawan Shrine is a sacred and inviolable place.

But the venue has been the center of tragedy more than once. In 2006, a man was beaten to death after he used a hammer to smash the statue, breaking the bust and shattering the entire body. Later it was revealed that the perpetrator was mentally unstable. Then, on August 17, a big explosion caused by a bomb hidden in a backpack ripped through the front gate of the shrine. The merciless act of terrorism resulted in the death of 20 innocent people who were praying, and many more were injured on that fateful day.

The history of the Erawan Shrine is shrouded in mystical belief. Ratchadamri Road was built in 1902 during the reign of King Rama V. Ploenchit Road was built to form the Ratchaprasong intersection 18 years later.

During the 1950s, Bangkok was modernizing and the number of foreigners that visited the city for business and leisure was on the rise. It was during this period that Pol Gen Pao Sriyanont, chairman of Saha Hotel Group, got the idea to build a new hotel on Ratchadamri Road in order to cater to the increasing number of visitors.

Although Bangkok was modernizing fast, most Thais still held deeply-rooted beliefs about spirits, omens and many other superstitions that defined how things were done and when.

When the Erawan Hotel opened for business in 1956, it was said that there had been many accidents during construction of the hotel. This was attributed to the belief that the land on which the hotel was constructed was sacred. The construction had disturbed many of the ancient forces that had always been there.

The hotel executives therefore invited Rear Admiral Luang Suwichanpat, a well-known shaman, to find an auspicious opening date for the hotel. On visiting the site, Luang Suwichanpat remarked that the hotel had never performed a rite to ask for permission from the sacred deities that resided in the area. The hotel’s name, ‘Erawan’, was also the name of the god Indra’s three-headed elephant. According to Luang Suwichanpat, all this required a proper ceremony to be performed in order to pay respects to the gods.

This was why the Erawan Shrine was built in the year 1956, according to historian Siripoj Laomanacharoen.

In the following decades, belief in the shrine’s spiritual power grew among devotees. Many people flocked to the shrine with their prayers. Some came asking for solutions to their problems. Couples came to ask for children. Students came to ask for good grades. Devotees believe that if their prayers are answered, they must bring a wooden elephant to the shrine. Today there are scores of wooden elephants of all shapes and sizes placed there by happy devotees.

During the decades that followed the installation of the Erawan Shrine, the surrounding Ratchaprasong area went through a period of remarkable commercialization. In the 1960s, the Thai-Daimaru department store opened just across the street from the shrine. Thai-Daimaru was reputed as the first building in Thailand with an escalator. Many more department stores followed in the coming years, including the World Trade Center, which is now Central World.

Although these commercial centers were characterized by rapid modernization and consumerism, the owners still believed in the mystical forces of the area. When the World Trade Center opened for business in the 1990s, it was believed that the cosmic vibes of the Erawan Shrine were so intense that the store owners installed an additional shrine for Phra Trimurati, another Hindu god, as a counter force.

In recent years, operators of several commercial buildings in the area have decided to build shrines to Hindu gods for this very reason. The Amarin Plaza has Lord Indra, the king of the Hindu gods, at its entrance. Gaysorn Plaza, another luxurious mall across the street, has a shrine built for Phra Lakshmi, the wife of Lord Vishnu, the sustainer of the universe.

Due to the sacred shrines devoted to the gods and the hundreds of devotees who come to pay their respects daily, the Ratchaprasong intersection has become known as the ‘Intersection of the Gods’.

Despite the fact that it is one of the busiest and most developed spots in Bangkok, it is still believed that the area is filled with sacred forces that need to be revered and respected.