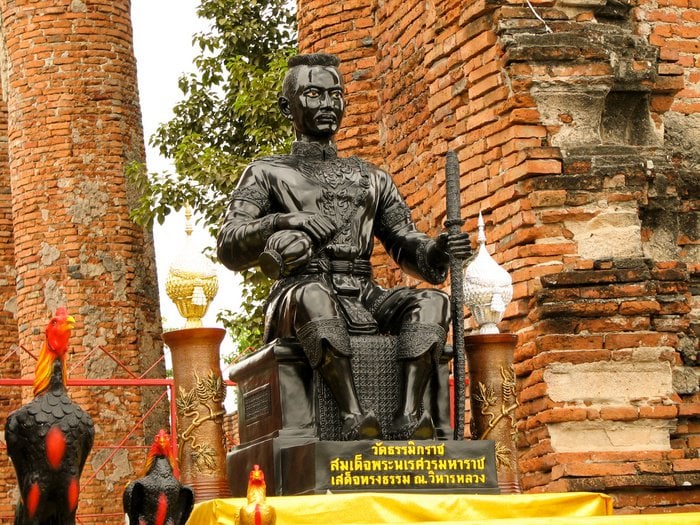 PHUKET: Throughout his life, King Naresuan fought many wars with the Burmese in order to liberate Siam from their control. Toward the end of his reign, in the year 1600, Siam had recovered its independence and peace was restored. During this time, the king worked to restore foreign trade for the Kingdom.

Due to ongoing wars between Burma and Cambodia, the Portuguese – the only western traders that frequented the Kingdom during that period – had left Ayutthaya. Around the year 1600, King Naresuan sent a letter to the captain of Malacca, Dom Fernao de Albuquerque, inviting the Portuguese to renew their trading activities in Siam.

The king wanted the Portuguese captain to send Franciscan priests to his capital, promising ‘honors and favors’ on any Catholic priests who came to live in Siam. The reason King Naresuan specifically asked for Franciscan priests was because he had heard of their order from Portuguese residents living in Ayutthaya.

The Portuguese had much to gain from reviving trade with Siam. Because Siam traded extensively with China, both the Spanish and Portuguese traders wanted to maintain good relations with the Kingdom as a means of trading indirectly with the far east.

The friar chosen to undertake this role was Frei Andre Do Espirito Santo, who prior to his journey to Siam had been in Macau. According to Portuguese historical records, the friar was ‘very praise worthy’ and led an exemplary life. Although he was virtuous, Frei Andre was old and weak. Many years spent fasting in penance had left him looking like nothing but skin and bones.

Albuquerque named Frei Andre as the secretary of the Portuguese embassy that was to travel from Malacca to Ayutthaya. He was instructed to conduct any business with the king that would be ‘of service to God, the welfare of the Estado da India and the profit of Malacca’. Albuquerque also instructed the friar to obtain a commitment from King Naresuan that he would not form a pact with the Dutch, a western power who was becoming increasingly active in its business dealings.

Frei Andre then left Macau for Ayutthaya. A journey that should have only taken eight days became a journey that took seven months. Due to bad weather and incompetent navigation, the vessel hit a rocky shore and was damaged. The passengers and crew had to disembark onto a nearby beach.

The Portuguese were stranded on the beach for a fortnight and could not decide what to do next.
They were on the verge of abandoning their damaged ship and continuing on foot when they noticed ships sailing toward them.

Later it was discovered that the fleet was sent by the King of Siam and was sailing toward Cambodia to put down a rebellion. A Muslim captain commanded the fleet. When he learned that the Portuguese were sailing up to Ayutthaya to fulfill a request from King Naresuan, he gave the crew some rice and raw materials to fix their ship. He also offered to take Frei Andre and a few others to Ayutthaya.

The seven vessels sailed slowly for another four days. Unfortunately for the fleet, on the fifth day, a great storm broke out and six of the seven ships were sunk in the storm. Luckily Frei Andre was on board the only surviving ship. The surviving ship sailed to a small island near the coast, where the passengers and crew once again disembarked. After several days on the island, subsisting entirely on crabs, Frei Andre had enough of sailing and decided to continue the rest of his journey on land.

Travelling on land was equally dangerous. Much of Siam was covered in dense forest that was home to dangerous wild animals, including tigers, rhinoceroses, elephants and buffaloes. At night, the travellers had to sleep in trees, securing themselves by tying their bodies to tree branches with vines.

After four nights spent in this dangerous and uncomfortable environment, they came to a village where the headman was a Muslim. Frei Andre explained to him in Malay that he was on the way to Siam in response to King Naresuan’s request for priests. The friar explained that his vessel had been shipwrecked off the coast of Cambodia and now his party was in need of food and a cart to take him and his sick companions to Ayutthaya.

At first, the headman refused and said that he did not know Frei Andre and could not believe that he was telling the truth. So Frei Andre, who at this point was suffering severely from swelling in his legs and groin, decided to stay at the village, where he began to compose a letter to the Portuguese in Ayutthaya, asking them to inform the king of his plight.

When the village headman heard of this, he relented and provided food and a cart to carry Frei Andre and three of his sick companions. From then on, Frei Andre was able to travel without much hindrance. Every village he came across, he was given food, water and shelter. Finally, the party arrived at the Chao Phraya River, where a boat was arranged for them to travel up-river to the city of Ayutthaya.

At last, after seven months, the party arrived in the capital city. All the Portuguese then living in the city gathered to welcome Frei Andre. They took him directly to their church, which was made of bamboo and straw-thatch. He rested there for a few days before going into the city to have an audience with King Naresuan.