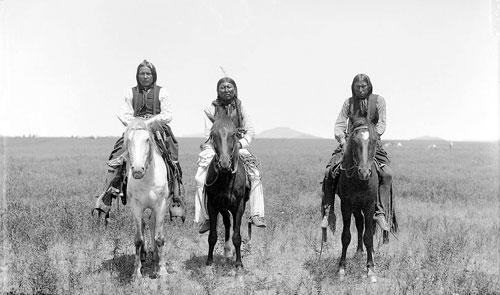 The Son goes one better: a multi-generational family saga that spans two centuries, from the days of the Comanches to the great cattle drives to the 20th century oil boom. Despite its grand ambition, the novel is no Lonesome Dove. Literary flaws abound, but this is only Meyer’s second book while McMurthy had written a slew of them about modern Texas – Hud, The Last Picture Show, Terms of Endearment – before turning to the historical fiction of Lonesome Dove.

Taken on its own terms, The Son is still a stupendous achievement as it artfully weaves together three narrative strands: an interview with the family patriarch, Eli McCulloch, in 1936, when he is 100 years old; the diaries of his son Peter spanning the years 1915-1917, and the reveries of his 86-year-old great granddaughter Jeannie as she lies dying in 2012.

When Eli McCulloch was born in 1836, the area that the Comanches ruled – the Comancheria – covered the western half of Texas, almost all of Oklahoma and parts of Kansas and New Mexico. They were the richest tribe in the West as measured by horses and captives. They had driven out the Apaches and raided freely in East Texas and Mexico.

One of their captives was 13-year-old Eli McCulloch. The Comanches mutilated corpses to scare their enemies, raped and tortured survivors because they wanted to, and abducted captives because their tribe always needed more members. Over the course of three years, Eli McCulloch was adopted into a family and became a Comanche warrior. He acquired friends, lovers and scalps.

Meyer has done an enormous amount of research and it shows in the clumsy manner of James A. Michener. He devotes entire chapters to how the Comanches made their bows and arrows and butchered their buffaloes. Still, the narrative momentum seldom flags as Eli McCulloch moves on to become a Texas Ranger, a Confederate guerrilla, a cattle baron and an oil industry pioneer. He is only 40 when the once mighty Comanches are nearly wiped out by disease, hunger, the extinction of the buffalo and the US cavalry. And the lush green prairie of his youth turns dry and brown.

As the novel progresses, the other two narrative strands move strongly to the fore. Educated and irresolute, Eli’s son Peter is tortured by a modern day massacre, yet redeemed by love. Tough and ruthless, the great granddaughter Jeannie idolizes Eli and presides over a quarter million acre ranch and a huge oil empire. She merits her own cover on Time Magazine but in matters of the heart, she comes up short. In her dying moments, she numbers her regrets.

And their story is hugely entertaining – the furthest thing from the romance of the Old West. Here is Eli McCulloch on the grand days of the cattle drives from Texas to Kansas:

“The life of a cowboy has been written about as if it were the pinnacle of freedom in the West but in fact it was sleepless drudgery almost beyond imagination – five months of slavery to a pack of dumb brutes – and had I not been riding for my own brand I would not have lasted a day. The fact that the country was tame enough to drive valuable property across tells you all you need to know; the days of Bridger and Carson and Smith were long gone, the land was already going domestic.”

Philip Meyer’s new novel The Son is available from Amazon, or in hardcover by ordering through all good bookshops in Phuket.