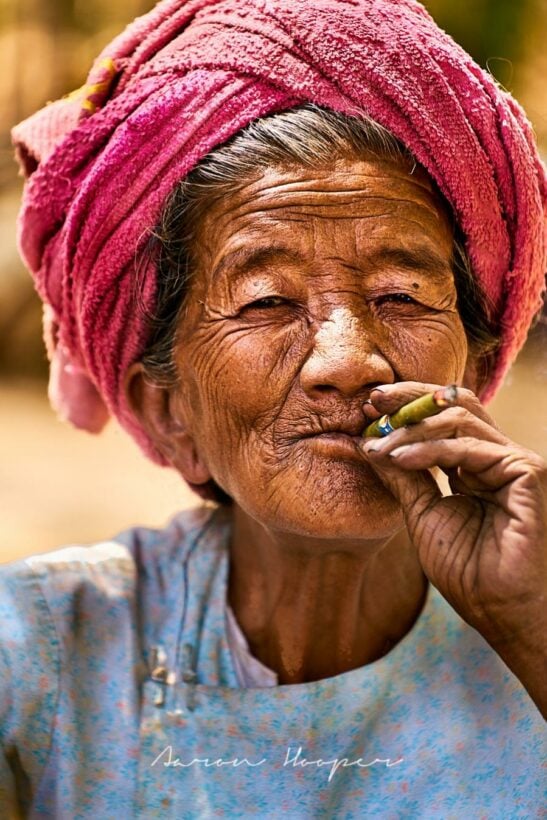 I have always said that ‘wrinkles’ add character and show that someone has really lived a full and eventful life.

On this particular afternoon in the remote waterways of Myanmar, I happened upon a fabulous example of life’s wrinkles. I had taken a very arduous longboat tour far up a tributary of Inle Lake as we were travelling to the Shwe Indein Pagoda Complex built in the 12th Century by King Ashoka. Chugging slowly past paddy fields, we saw the farmers plowing and tilling the rice with water buffalo pulling wooden yokes. It was idyllic.

I set out on foot into the bamboo forest behind the temple. The bamboo were larger than I had ever seen in Thailand, reaching incredible heights and filtering the sunlight onto the forest floor. Through the broken light of the bamboo, I could see smoke rising not too far ahead and decided to have a closer look.

I happened upon a group of local village women kneeling around a bonfire talking, laughing and exchanging stories. As is the custom for many of the local villagers, both men and women smoke hand rolled cigars, often flavored with pineapple. I smiled – truly the universal language – and to my relief, they all flashed sly smiles back as if I had caught them up to something.

I motioned to my camera and asked permission (in sign language) to take a woman’s photo. She sat up straight, proudly adjusted the red towel atop her head, took a huge pull on her cigar and smiled.

Here is that photo.

Aaron Hooper is a freelance photographer long known for his other identity as the Chef/Owner of Joe’s Downstairs Restaurant in Phuket. He is now refocused on his passions for writing, photography and travel. You can see more of his portfolio here.

Do we need a Last Will and Testament in Thailand?