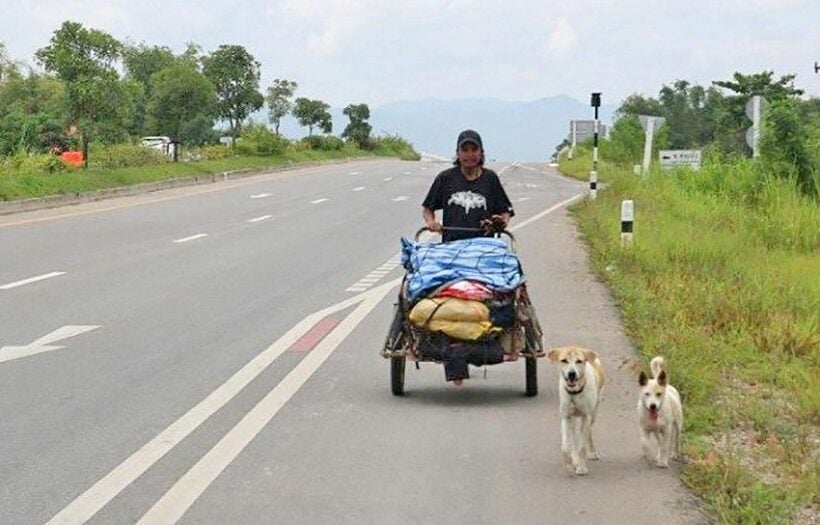 Every day, Sakchai Suphanthamat can be seen pushing his cart along the highway, in the company of three dogs, two of whom he has picked up along the way.

Sakchai carries his wife’s ashes, on a pilgrimage to take her to all the places she longed to see while she was alive.

The Bangkok Post reports that the bereaved man started his journey three years ago. He left from Trang, the province where he married his wife, who died of tetanus in 2016.

She had always wanted to see Doi Inthanon in Chiang Mai, Thailand’s tallest mountain, and so Sakchai decided to head there first. The journey of more than 1,500 kilometres took him over a year.

Sakchai, 40 years old and from Udon Thani, says his wife had also wanted to see the sea in Trat, south-east Thailand, and he decided to take her ashes there too.

The Bangkok Post reports that Sakchai has been left heartbroken. He says being left with nothing to look forward to after his wife’s passing led to the decision to embark on this epic journey with her ashes.

“I am determined to take her bones around the country. She liked the sea and wanted to stay close to it. She used to tell me that she wanted to visit the sea in Trat province in the East. During my journey I stop every three kilometres or so, so the dogs can have a rest.”

Sakchai and the dogs sleep under mosquito nets at night and local people who’ve heard about his journey bring food for him and the dogs. As Sakchai sleeps, his wife’s ashes are always by his side.

“I still love her and have vivid memories of our time together, even though she left me three years and four days ago.’’

Thai Airways not at risk of shutting down: president