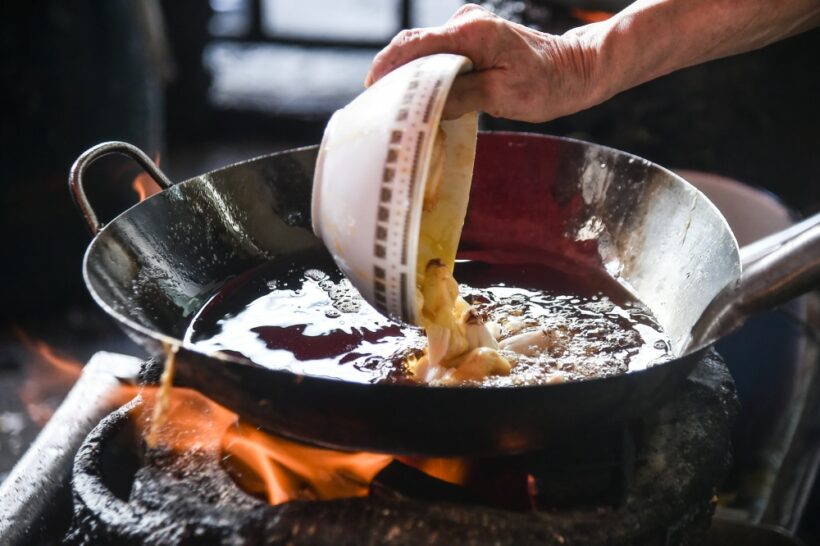 …Michelin stars, that is, as 17 Bangkok restaurants are named in the first Thailand edition of the little red guide

A day after being-awarded one Michelin star in the first Michelin Guide Bangkok, 72 year old Supinya Junsuta, better known as Jay Fai to her customers, is hard at work, expertly wielding her wok over the hot charcoal brazier and wearing the oversized goggles she favours to protect her eyes from spurts of hot oil.

She occasionally glances up at the crowd of hungry diners queuing to try her signature dishes and the large group of reporters who have invaded her small shophouse in the Pratu Phee area, next to the Golden Mount.

While Bangkok is known the world over for its incredible street food, Jay Fai is the only street venue to have earned a Michelin star, bringing it on par with such fine-dining establishments like Nahm by David Thompson, L’Atelier de Joel Robuchon, J’aime by Jean-Michel Lorain, and Sra Bua by Kiin Kiin. “I have just this one branch here at Pratu Phee and I’m the only cook. I work 12 hours a day, from 1.30pm until 1.30am every day except Sunday,” she tells The Sunday Nation. 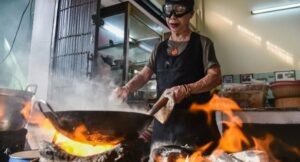 Jay Fai – the “Jay” a familiar term for older sister and the “Fai” a reference to the mole on her neck – inherited the business from her father, a stir-fried noodle chef – 40 years ago and quickly made her ordinary eatery extraordinary. Thirty years ago, when a dish of rad naa (stir-fried noodles topped with gravy) cost 20 baht, Jay Fai dressed up her dish with a giant-sized portion of seafood and sold it for 120 baht. The price didn’t turn diners off and the eatery’s reputation for top-quality meals quickly spread.

Known for premium local seafood dishes, the best-selling dish is crabmeat omelette that varies in price from 800 baht to 2,000 baht, while the most expensive is a rad naa made with Mexican abalone that can go as high as 10,000 baht a pop. The cheapest items on the menu are guay tiew kua gai (wok-fried noodles with chicken) and pork rad naa, each 200 baht. 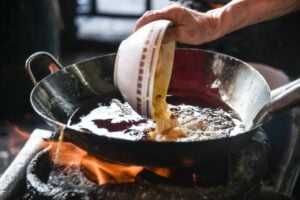 “I carefully select only the best local ingredients. The fresh crabmeat is from Nakhon Si Thammarat and, for my omelette, I use only the meat from the crab-paddle legs. There is no frozen meat and seafood here. My eatery is always welcomes high-profile figures and international chefs. Several chefs have flown in from New York to learn how to cook Thai-style omelette, crab curries and dried congee,” Jay Fai says. “I didn’t expect to get a star because we’re just a small eatery so it’s an enormous honour.” 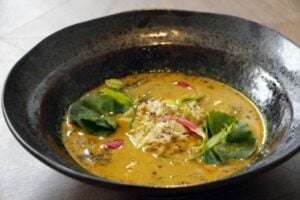 Though Jay Fai is the only roadside venue to earn one star, the debut edition of Michelin Guide Bangkok has highlighted 28 street food locations with “Bib Gourmand”, a rating that recognises restaurants offering exceptionally good food at moderate prices, in Thailand’s case for a maximum of 1,000 baht. The newly minted eateries include Go-Ang Kao Mun Gai Pratunam for its aromatic and flavourful chicken with rice, Jay Gee’s garlic fried chicken on Soi Polo, celebrated pad thai outlet Thipsamai Pratu Phee, Jay Daeng’s tasty som tam on Chula Soi 42, and crispy patongo (deep-fried Chinese dough) served at Pa Tong Go Savoey in China Town. Michelin’s full-time food inspectors have been busy over the last eight months, making anonymous visits to restaurants to gauge their food. Restaurants are rated on such criteria as the quality of ingredients, consistency, cooking technique and flavour, the chef’s personality and value for money. “The first edition of the Michelin Guide dedicated to Bangkok highlights the rich gastronomic diversity,” says Michael Ellis, international director of Michelin Guides. “Thai food is recognised around the world. Everyone knows tom yam, pad thai and satay. Bangkok’s food scene is varied, diverse and intense. The spices and intense seasoning are unique to Thai cuisine, as it mixes all tastes to the palate – salty, sweet, bitter, sour and umami. Thailand also has incredible street food that should be included in the selection.” 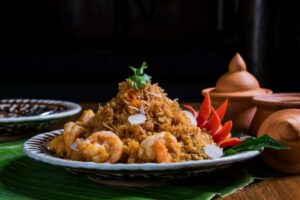 A star goes to Thai restaurant Chim by Siam Wisdom for its exceptional traditional fare.

The inaugural edition awarded 14 restaurants one star, highlighting the quality of local cuisine with seven of them – Bo.lan, Nahm, Saneh Jaan, Chim by Siam Wisdom, Sra Bua by Kiin Kiin, Paste and Jay Fai – offering Thai food both prepared to traditional recipes and with a contemporary twist. The other one-starred restaurants are Japanese eatery Ginza Sushi Ichi, three French establishments – L’Atelier de Joel Robuchon, J’aime by Jean-Michel Lorain and Savelberg – as well as two European contemporary venues – Suhring and Elements – and the 12-seat Upstairs at Mikkeller that pairs innovative cuisine with craft beer. Chef Phatchara Pirapak might be only 27, but her refined Thai cuisine drawn from age-old recipes and the elegant ambience she has created in new restaurant Saneh Jaan on Wireless Road were enough to win the hearts of Michelin’s food inspectors. 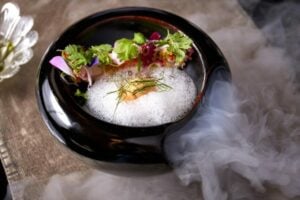 A single star goes to Sra Bua by Kiin Kiin, a place that changes diners’ perceptions of Thai food.

“We try to offer traditional and authentic Thai tastes and pay attention to every detail. We insist on only the best ingredients. The glass noodles, dried rice noodles and black bean curd come from Kanchanaburi, the shrimp paste from Klong Kone in Samut Songkhram, the palm sugar from Phetchaburi, and the dried salted fish from Tak Bai in Narathiwat,” says Phatchara, a graduate of Suan Dusit University’s School of Culinary Arts who honed her formidable skills with Chumphol Jangprai. Among the best-selling delights are khai palow (five-spice egg with pork), a mix of hard-boiled eggs and tiny chunks of caramelised pork belly braised for three days with Chinese spices, black soy sauce and palm sugar, as well as stir-fried long bean with aromatic shrimp paste. “I think the Michelin Guide will benefit our gastronomic scene. It will guide foreigners to experience the many different aspects of Thai cuisine,” Phatchara says. 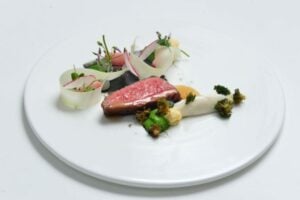 The small Upstairs at Mikkeller gets one star for its innovative cuisine.

Ancient royal Thai recipes are brought back to life with a contemporary approach by experienced chef Bee Satongun in the one-starred Thai restaurant Paste at Gaysorn Village. Paste offers a range of signature dishes inspired by the Snidwongse family cookbook and a few other private sources. They include roasted duck with nutmeg, curry paste and saw tooth coriander served on rice crackers; watermelon and ground salmon with crispy shallots and roasted galangal powder; and southern-style yellow curry with crabmeat seasoned with black pepper, pennyworth leaves and hummingbird flowers. Three big names on the city’s food scene – Gaggan on Soi Langsuan, Le Normandie of the Mandarin Oriental, and Mezzaluna on the 65th floor of Lebua – won two stars. No restaurant has as yet achieved the coveted three-star rating. That comes as a little bit of a surprise even though it is not easy to attain with the extremely high standards required to merit three Michelin stars. For example, in France, which has published the Michelin Guide for over a century, there are only 27 three-starred restaurants out of 4,500 establishments rated in the guide. Overall, there are 22,000 restaurants all over the world listed in the Michelin Guide and out of those, only 116 have three stars and just 450 two stars. 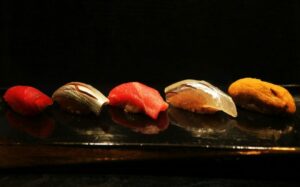 “Evaluations are carried out every year and the restaurants can win or lose stars,” says Claire Dorland Clauzel of Michelin Group. But not everyone is satisfied with Wednesday’s announcement. “Fewer Bangkok restaurants received stars than I would have expected. I think our city has more restaurants qualified for one star,” commented food connoisseur and gourmet Litti Kewkacha, who operates dessert cafes Sfree, Parferio and Kyo Roll En. “I’m disappointed that no restaurant earned a three-star rating and that no Chinese or Italian establishments were included on the list. The three two-starred restaurants serve their food course by course, which is probably more familiar to the inspectors than the Thai culture of sharing dishes that complement each other. It’s a good chance for Michelin to learn more about our culture and at the same time, we must improve our level to the internationally-recognised standard, particularly on service and consistency.” 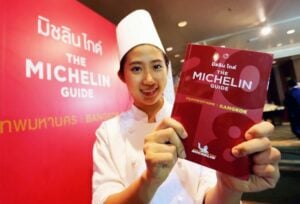 The Michelin Guide Bangkok makes Thailand the second country in Southeast Asia after Singapore and the sixth in Asia to have its own culinary reference. The red guide in both Thai and English costs 650 baht and will be available at leading bookstores from tomorrow. A digital version will follow soon.

Find Phuket’s best dining at Thaiger Bites. 2,400+ restaurants, cars, clubs and cafes, all in one place.