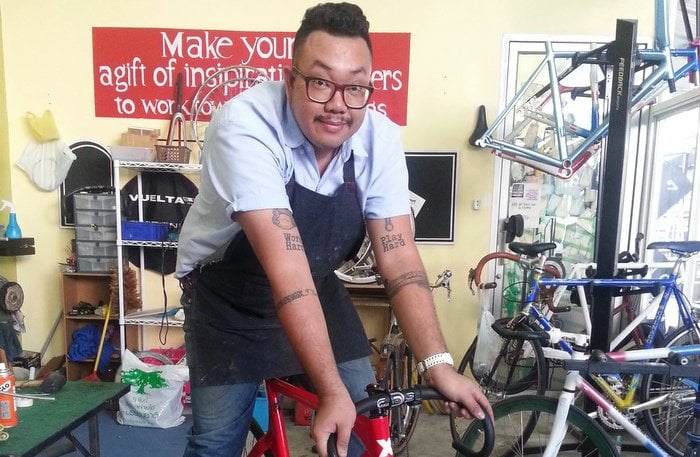 Vissaves ‘Bon’ Kumphanthong, owner of Cuca Bike, event organizer and director of the Bangkok Criterium, got hooked on cycling only a few years ago.

“It was between 2009 and 2010 that I started looking for a sport that could improve my health, and I settled on cycling,” Bon says. “I wanted a bike that looked awesome and unique, so I ended up settling on a fixed-gear bike.”

A fixed-gear bicycle, commonly known as a ‘fixie’, is a bicycle that has a drivetrain with no freewheel mechanism, and has become increasingly popular over the past 15 years.

There were several major hurdles for Bon after he became a fixie owner. The first was the difficulty of finding a bike shop that could repair, maintain and modify the bike. So, he opened up his own shop – Cuca Bike.

During that time, Bon began establishing his ‘biker gang’ – Fixed Family Thailand – which consisted of 30 to 40 people who zipped around the streets of Bangkok at night.

“The style of the bike and the sensation we caused got a lot of attention. Some people even joined the family,” Bon says.

After a certain point, just riding with ‘the family’ wasn’t enough. Bon wanted to race fixies. “That’s how the Bangkok Criterium was born,” Bon says.

The inaugural event, ‘The Knight Criterium’, was held in December 2011. There were about 30 racers, and the entire event was sponsored by Bon’s friends, who also own bike shops around Bangkok.

“It was a small event, but we received lots of positive feed back. Many cyclists wanted to know what a ‘criterium’ was and wanted to race in the next one,’ Bon says.

After that, the event began to pick up momentum – the kind of thing a fixed-gear cyclist knows exactly how to handle.

“The next event was held in the beginning of 2012. I was pretty prepared, and knew how to organize the event and how to find sponsors for prices,” Bon says. “There were about 200 participants that time and it came together beautifully, with a lot of post-event coverage on social media sites.”

The event was big enough to catch the eye of Cinelli Thailand. The Italian bicycle manufacturing company, based in Milan, mostly produces components for bikes, many of which are widely popular for converting road bikes to fixies.

The company recently teamed up with San Francisco based MashSF to create the popular ‘Cinelli MASH’ frames, which are widely used for fixies.

Cinelli Thailand got on board as a sponsor for the third Bangkok Criterium. The president of Cinelli, Antonio Colombo, took much interest in the event, and stepped in to back the fourth criterium – which had about 400 participants – with the full power of Cinelli.

Singha Corporation later took over as the main sponsor, backing Bon to arrange three events: one in Bangkok, one in Chiang Rai and one somewhere in Southern Thailand.

“I of course chose to hold the Southern Criterium in Phuket,” Bon says.

Comments from the cyclists such as ‘why pay a registration fee for such a short race, when cyclists can pay the same amount for a long race’ made it clear to Bon that the community needed be educated about what a criterium entails.

“Once I started explaining how the race worked and the prize structure, there was a lot of interest and excitement,” Bon says. “I actually couldn’t allow anyone to register the day of the event because we already had so many participants.

“We will be bringing the event back to Phuket next year. It will be bigger and better.”

The Phuket Gazette and PGTV were proud sponsors of the Southern Criterium 2015.

Gardening: Design an aerie in Eden