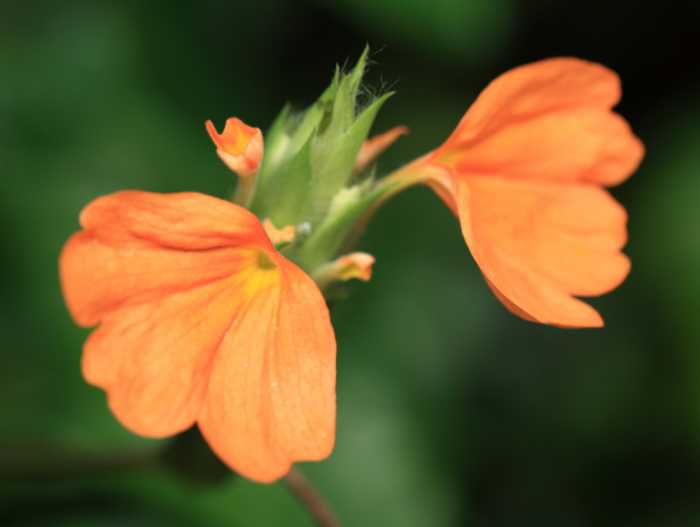 PHUKET: One shrub I have consistently failed to mention in dispatches is the firecracker flower. In part, that omission relates to its tongue-twisting Latin name (crossandra infundibuliformis). However, the main reason is that not only is it absent from my garden, but I have rarely seen the shrub in Thailand.

Despite its small stature (up to four feet) it’s a very showy plant – producing fan-shaped flowers that explode above the stalk’s four-sided, greenish thorns. Though some horticulturists believe the name comes from the ripe seeds’ propensity to explode, I prefer the visual explanation. In any event, the name “firecracker” is not at all inappropriate.

I recently saw one, competing with a chalice vine outside a modest property in Nabon. Both shrubs were in full flower, but the firecracker was not at all fazed by its larger neighbor. Though many varieties are apparently orange, the one that occurs in Thailand is predominantly yellow, and this one was no exception.

A native of Sri Lanka and southern India, the firecracker plant can be grown as an exotic house specimen outside the tropics, but in a Phuket garden it will prefer well-drained, rich soil and a position in full sun or partial shade.

Because of its neat shape, it looks good in a container. While the long stalked thorns and the unusually-shaped flowers (with three to five asymmetrical petals) are the main attraction, the firecracker also boasts glossy, evergreen foliage. And another bonus: the flowers are produced more-or-less continuously in favorable conditions and – unlike so many tropical bloomers – they stay on the bush for several days.

Propagated by seeds or cuttings, the firecracker is not a big shrub, but makes a dramatic appearance in a small garden – if you can find it.

Cestrum aurantiacum may pose less of a problem for a gardener on the prowl for new plants. Native to the Americas, the yellow or orange jessamine (the name is a corruption of jasmine due to its fragrance) has adapted well to conditions in Southeast Asia.

In common with the firecracker, it possesses tubular, or funnel-shaped, yellow flowers, but the similarity ends there. This is because the small blooms are borne in dense clusters of 10 to 15 florets – a bit like honeysuckle – and the shrub has a distinct tendency to climb. The flowers are followed by white berries.

Unsurprisingly, as a paid-up member of the solanaceae family, these are likely to be poisonous. A good choice for the inexperienced gardener, less so for one with a young family. The cestrum will tolerate most climatic conditions and responds well to pruning. Young shoots should be pinched back to encourage bushy growth. Propagation is from soft tip cuttings.

There are a large number of other cestrums. C. elegans comes from Mexico. A vigorous shrub with arching branches, it bears the characteristic tubular flowers, though in this case they are red to purple. Produced in dense panicles, they appear at the end of young shoots. The narrow leaves are olive-colored and hairy.

C. nocturnum (the night jessamine) is valued for its haunting fragrance at nighttime, when the pale, greenish-yellow tubular flowers come into their own. In contrast, the day jessamine (C. diurnum) has pale white clusters of flowers held on slender, upright stems, which exude their perfume during the day.
The dark berries give the shrub another name – inkberry.

All jessamines are robust and can quickly become rambling: indeed C. parqui from Chile has become invasive in some mild regions of the world where it is now regarded as a weed – not likely to be a problem in Phuket.