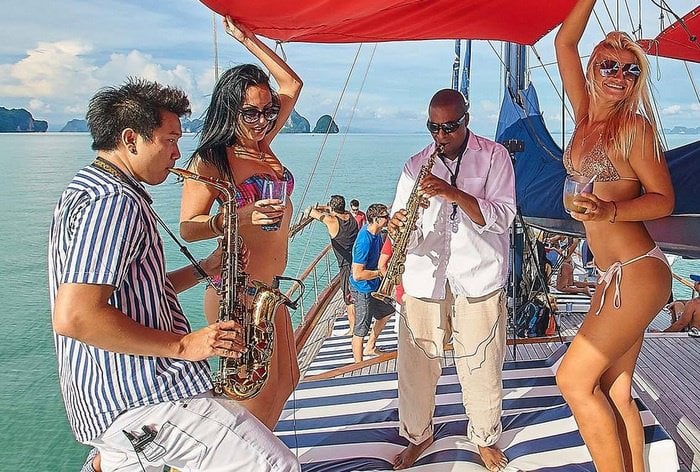 PHUKET: With a handful of girls dancing in bikinis on the deck as Jimmy Rougerie wails on the tenor saxophone and the sounds of the modern meringue tipico music roll off the wooden deck of the sailing yacht Capricorn, it is difficult to imagine Somali pirates laying siege to the vessel just a handful of years ago – but every boat has its history.

The date was March 2011, and the 28-meter boat was departing Djibouti in the western Gulf of Aden to begin its journey through the Arabian Sea on its way to Phuket.

Under the protection of a private security firm, Naval Guards Ltd – at the height of pirate activity off
the east coast of Africa – the boat was being shadowed by 42m escort vessel Marshal-5.

Both vessels were attacked simultaneously by Somali pirates on March 3.

“After a fierce exchange of gunfire between the pirates and the escort vessel, there were no injuries reported on either side, and only minor damage to the vessels themselves.

“With a clear firepower advantage, however, the Naval Guards quickly gained control of the
situation and the pirates gave up.”

The wooden decks of the multimasted Turkish gulet (pronounced “goo-let”) and the fine mahogany wood interior show no signs of the attack, or the sheer panic that the crew must have experienced.

Related Posts  A physiotherapy technique for the elderly at Patong Hospital

Instead, as the Bodrum-inspired schooner makes her way out into Phang Nga Bay for a day trip
to James Bond Island, she exudes the essence of the luxurious island lifestyle that has been steadily becoming more widely accessible through Phuket’s charter businesses.

The Sea Lounge Club based on board the gulet is a merger between the yachting lifestyle and the northern Phuket beach club vibe. The huge space on the aft deck has plenty of room for guests to take a break from the sun as they pop open a bottle of bubbly and stretch out on oversized cushions. The forward deck provides ample space for lounging patrons to soak up the sun, as well as plenty of room to dance.

They say that it isn’t the size of the boat, but the motion in the ocean that counts, and though SY Capricorn is on the larger side for a gulet, it is the rhythm that sets the Sea Lounge Club apart from most other charter tours.

In line with the work of Tatico Henriquez, considered the godfather of modern meringue tipico, drummer-DJ Frank Nastri delivers some strong, electronic Caribbean beats as Jimmy rifts along on the saxophone.

It is the music that sets the vibe, lulling some into a blissful state of peace as they gaze out across the bay, while seducing others to their feet – dancing the day away.

Though Capricorn is available for private charters, those wanting to join the Sea Lounge Club for an afternoon on the water can book a place for 5,950 baht.

The boat departs Ao Po Grand Marina at 11am and returns at about 5pm. Lunch is included;
pirates need not inquire.