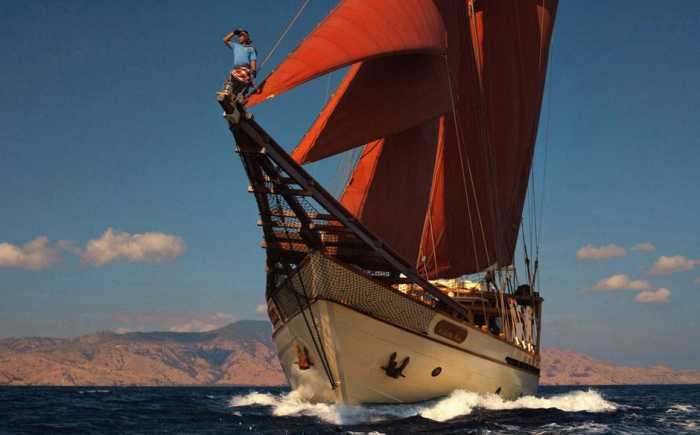 PHUKET: The exquisite waters of the Andaman Sea surrounding Phuket will once again usher in stunning superyachts from Asia and around the world at the 14th annual Asia Superyacht Rendezvous from December 16-18.

The largest gathering of boat and motor superyachts in Asia, the Rendezvous will soon welcome some of the world’s most captivating vessels, which can also be seen moored in some of the the region’s best cruising hotspots during the holiday season.

Glitzy but not overly crowded in a “Med-style” way, Phuket offers a location not only tailor-made for superyachts, but also a base from which to explore the region’s famed islands. As a gateway to Southeast Asia exploration, it’s hardly surprising that Phuket has hosted every single Asia Superyacht Rendezvous since the inaugural event in 2000.

Delighted with this year’s response, organizers report early entrants to include such stunning vessels as the 40-meter SY Si Datu Bua by Konjo Boat Builders and the 50-meter luxury SY Silolona. These two boats are modern incarnations of those glorious traditional Indonesian sailing ships, originally built for trade along the historic spice routes. The gaff-rigged Silolona in particular will no doubt impress VIP guests stepping aboard at the opening party.

“Having hosted the onboard yachting cocktail party in 2012, Silolona is sure to impress returning guests and prove to be a wondrous setting for new guests to enjoy,” noted Rendezvous organizers. “Speedboats will deliver our guests to this luxury yacht moored in Kata Bay.”

Other early superyacht entrants include: the 33-meter SY Shamoun by Claasen Shipyards, launched in 1999; the 37-meter SY Escapade, a spectacularly fast cruising sloop built by the prominent NZ shipyard Fitzroy Yachts; the 36-meter SY Yanneke Too, launched in 1996 by Camper & Nicholsons, a modern schooner; and the sleek Lago 92 catamaran, Ciliam.

The prestigious gathering will once again be hosted by the luxury residential resort, Kata Rocks. Winning 16 international property awards, the iconic resort and residence is a perfect location for those taking part in Rendezvous.

“Our guests enjoy staying in the award-winning ‘Sky Villas’ which provide fantastic sunset views of their anchored superyachts on beautiful Kata Bay,” said the organizers.

Highly regarded skipper and Phuket’s PIMEX Boat Show director, Andy Dowden, will again set forth the courses for the two days of friendly, yet competitive, “Superyacht Sailing Races”. The first day’s race will present an impressive lineup of sleek sailing vessels with glistening mammoth motor yachts following close behind, for the highly competitive – but still friendly – race. The afternoon is then free for owners, guests, captains and crews to enjoy Phuket’s beaches or to mentally prepare for the evening’s “Challenge”.

In the evening, principal sponsor Feadship Royal Dutch Shipyards will head up the “Friendship Challenge”, a signature since 2000, which takes place during a sumptuous buffet at Kata Rocks. The location will awe guests, the drinks will be free-flowing and the “Challenge” model boat racing, wonderfully ridiculous.

Team crews from the superyachts are given a good-sized bag of various “stuff” (sticks, paper, material and so on) to design, build and race a miniature yacht from the bag’s contents. The team needs lung power as well as brainpower, as a member must blow the yacht down a trough and back. Another potential hazard is that a beer must be downed quickly by members before turning to blow back up the course as the crowds wildly cheer on their favorite.

The second day’s race begins with the incredible sight of the vessels lining up outside Kata Bay in “dress parade” formation. Later in the day, the “Rendezvous Booty” takes place. Though clearly appealing to younger family guests, crews will also don pirate garb as they get into the spirit of the land and sea-based treasure hunt.

The final event is the exclusive Gala Dinner at Kata Rocks, a mouth-watering cuisine experience with flowing wine and a wide diversity of entertainment in addition to the excellent socialization at tables, ending another spectacular superyacht event in Phuket.

Phuket’s reputation as a yachting hub and gateway to further exploration of Southeast Asia is going from strength to strength and attracting more yachts whose presence aids the region’s development.

Organizers report that the Phuket area is now receiving the largest number of superyachts annually in Southeast Asia – an average of 50 vessels per year.

“Many Mediterranean-based yacht owners and captains are seeing Phuket as an increasingly popular winter destination, home to four full-service marinas – with peak cruising season beginning in November and staying on until March before they head over to Koh Samui and the Gulf of Siam for the April to September cruising season,” reports Gordon Fernandes and Captain Charlie Dwyer.