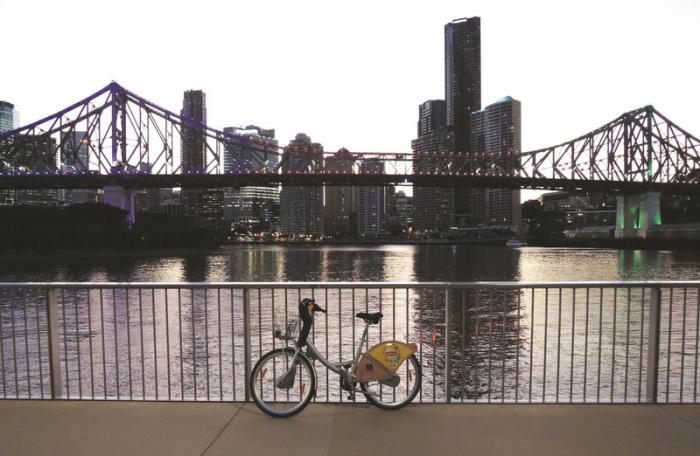 PHUKET: Queensland’s capital city of Brisbane has a population of 2.3 million people, some four times the official figure for Phuket. Yet driving around Brisbane, as I did recently, you could be forgiven for thinking you were in a quiet country town. The traffic flows efficiently and there are rarely any bottlenecks, or congestion, with which to contend. Certainly Brisbane has a modern and efficiently-planned system of super-highways, dual carriage-ways, roads and bridges over the Brisbane River, upon which the city stands.

To complement these, this forward-looking modern city also boasts superb cycle pathways, largely separated from the vehicular roads and traffic, and in addition a new City Cycling facility.

Brisbane’s cycling initiative (citycycle.com.au) is designed both for recreational and work-related biking. Of course the key to any successful cycling initiative is not just the convenient availability of rental bikes at reasonable cost, but also access to excellent and safe riding tracks, and it is here that Brisbane excels.

The beguiling waterside environment alongside the river weaves right through the heart of the city, so that commuters and tourists alike can get to shops, offices, cafes, botanical gardens, museums and art galleries quickly, safely and conveniently by bike.

Does that make you think of anywhere else where such an initiative might work?

Exactly. Phuket has every opportunity to capitalize on its island topography and large tourist base to develop a financially-successful community bicycle rental program, and could learn a great deal from the model that Brisbane has established.

Brisbane has 150 separate locations where City Cycle bikes are available on a 24/7 basis. These dovetail closely with mainstream transportation infrastructure, such as bus, rail and ferry stations. Plus there are plenty of suburban and downtown car parks encouraging you to leave your vehicle and go by bike.

You can sign up online for a day for as little as 60 baht. You get a code to enter into the computer at the bike docking stations which releases a bike plus helmet for you and away you go. Amazingly, if you use your bike in less than 30-minute intervals throughout the day, you don’t have to pay any more than that. If you become a regular user, you can buy the annual subscription – giving you the flexibility of City Cycle any day of the year – which works out at 1,800 baht a year or about five baht per day.

So, when visiting Brisbane, you can do what I did.

Take a bike from near your hotel and ride a river pathway into town to a riverside coffee shop for breakfast and the newspapers, after locking the bike into a nearby docking station. Then, take another bike through the botanical gardens, over to the Museum of Contemporary Art (also on the river). Again dock the bike and spend a couple of hours browsing the Brett Whitleys and Sidney Nolans prior to lunch in the museum’s outdoor restaurant.

Take yet another bike across the river on a cycle/footbridge to the free outdoor swimming pool on the riverbank. Dock the bike and swim, then doze in the sun for an hour. Take another bike back for a final ride along the river to the little park by your hotel, lock up the bike and sit by the river enjoying a well-deserved sundowner while watching the evening commuters scurry home across the Story Bridge.

I cycled for a total of almost three hours, covering maybe 30 kilometers, and I was out all day. All for the princely sum of 60 baht.

Now, imagine what a wonderful attraction it would be for tourists if Phuket could offer such a bike scheme with attendant cycle-ways. And imagine how much Phuket’s notorious traffic congestion, mayhem, death toll, injuries and pollution could be reduced by such a scheme. Food for thought indeed.

Looking Back: A Brief History of Thong Dee (Part 2)