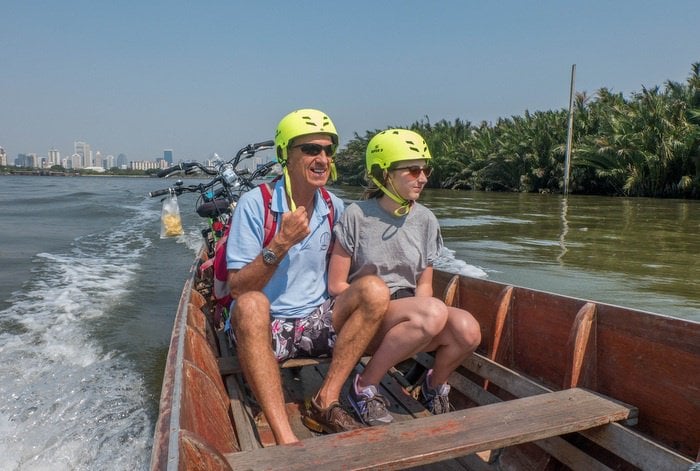 PHUKET: I have long believed the bicycle represents something of a magical chariot with the ability to unleash serendipitous experiences at many turns. So it proved on my last visit to Bangkok, where I had flown to spend some time with my 22-year-old daughter, Olivia, who stopped there en route from Sydney to London.

Now it’s probably no coincidence the words relaxing, bike ride and Bangkok hardly ever appear in the same sentence. In fact, the thought of cycling in Bangkok seems to offer as much possibility for relaxation and pleasure as say, thrusting a live cobra down one’s underpants.

However, as I was walking along Sukhumvit Road between Soi 20 and 22 on a typically sticky Bangkok morning, out of the blue I saw a row of brightly painted new Trek mountain bikes chained up outside a spa and massage shop.

Naturally, my curiosity was piqued and so I entered the dimly-lit interior of the shop where I was greeted by a young enthusiastic Dane named Martin Vestergaard. Martin is the owner of Bangkok Bike Adventure (www.bangkokbikeadventure.com) which he runs from his Thai wife’s massage and spa shop at 400 Sukhumvit Road.

Martin explained that when he arrived in the hot, polluted concrete jungle that is Krung Thep he so missed his native cycle-friendly homeland that he was determined to discover if there were hidden corners of the metropolis where relaxing and healthy cycling could be enjoyed. He was amazed to discover that behind the endless facade of high rises, malls, markets and condos lay a secret world where biking could be an absolute pleasure.

Martin decided to launch Bangkok Bike Adventure as a means of introducing even the most inexperienced cyclist to this unknown world of greenery and quietude hidden just out of sight of the average resident or visitor to this maniacal metropolis.

And so it was that my daughter and I decided to sample Martin’s half-day tour which is designed to take riders on a fascinating cycling trip through Bangkok and in particular to the massive green oasis that lies secreted at its center known as the ‘Jungle of Bangkok’.

We turned up bright and early next day to meet our excellent guide who would lead us on our magical mystery tour of a city I thought I knew so well. We were kitted out with bicycles adjusted to our size and needs and then we were off.

We started with some easy biking along the pavements to nearby Benjakiti Park, where we followed the leafy trails, and I was reminded of frequently taking my little toddler daughter, as she was then, to the huge lake in this park to feed the abundant fish and turtles that live here amid the chaos of Bangkok.

We carefully cycled further along Soi Asoke to the simply amazing bustling fresh market in Khlong Toey. This hive of human and animal activity operates on a 24/7 basis and wheeling our bikes through the myriad stalls, live seafood tanks and bustling chaos was a simply jaw-dropping experience with ‘wows!’ and photo ops at every turn.

Leaving the market we cycled a short distance to a hidden river pier, where we loaded our bikes aboard an open long-tail boat to cross the massive Chao Praya River over to the Bang Kachao isthmus, the ‘Bangkok Jungle’.

Upon unloading our bikes, it felt as if we had entered a leafy, saner, parallel universe unknown to most of Bangkok’s denizens and yet so very close to their everyday stressful lives. As we cycled along raised concrete paths through trees and mangroves the world of skyscrapers and traffic jams seemed a universe away.

The air was noticeably cleaner and well oxygenated and the quietude and sound of birdsongs were all the more surprising because we were still in the heart of the city and yet screened off from is pernicious insanity.

Here on this peninsula, traditional Thai life is conducted as it once was, and still is, up country and far away from Thailand’s feverish cities.

We made a stop for lunch in an old-fashioned ramshackle restaurant where the seafood was fresh and delicious, and later on stopped at the funky riverside Bangkok Tree House coffee shop and restaurant for more refreshments. Throughout our ride people were noticeably friendlier and happy to see us, greeting us with a happy wave.

Our boat was waiting for us at the pier after riding through this 2,000 hectare ‘lung’ of Bangkok and it ferried us back into the mayhem of inner city life.

We had been away just four hours and had cycled a mere 25 kilometers, yet we felt as though we had journeyed to another world where calmer, saner souls ruled and bicycles were the logical way to move about and enjoy the relaxing environment.

You can reach Martin Vestergaard’s Bangkok Bike Adventures at contact@bangkokbikeadventure.com and at call 085 918 6324.