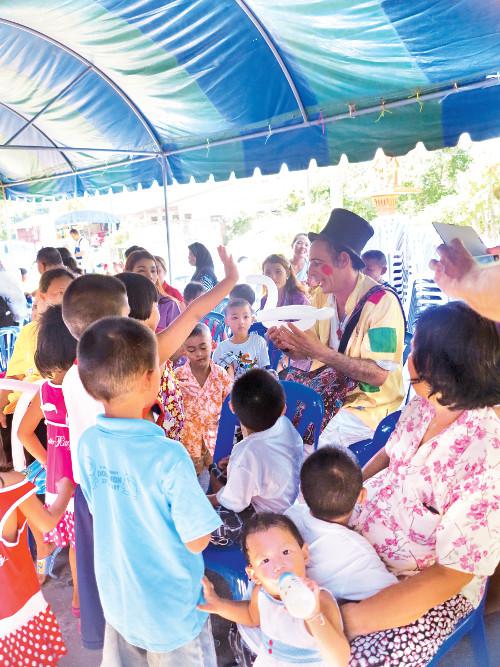 PHUKET: This one is for the kids! Thailand is celebrating its annual Children’s Day on Saturday, January 11 and there sure won’t be a lack of good fun for the little ones on the island. Planned activities in Phuket are as follows:

At the grounds of Phuket provincial hall, from 8am to 4pm, this year’s festivities will encompass the theme “Encouraging Thai youth turn the key to open the door for Asean”. Activities include an awards ceremony to acknowledge moral youth; the opportunity to tour the office of the governor as well as president of the PPAO; numerous games; passing out coupons for a chance to win a bicycle; performances by students including a special show by “Look Sorn Tee Tib” and a “Bozo Mayagorn” magic show, as well as guest appearances from famous Thai stars “Noon Woranoot”, also known as Lam Yong from the popular Channel 3 drama “Thong Neua Gao”.

Other places to celebrate the Children’s Day are as follows:

This year’s theme – pets. Children who post photos of their pets on the hospital’s Facebook page (facebook.com/phukethospital) or who bring a photo to the registration counter in the hospital will get a teddy bear. The event at the hospital’s car park begins at 8:30am and will last until noon. The program is full of games and performances including a yoga show by autistic children. There will be free snacks and drinks for all.

Fun at the Laguna Phuket Y junction begins at 4pm. Make sure you’re there to enjoy the magic show presented by Thailand’s most sought after illusionist Naris from Bangkok. The magician goes on stage at 5:10pm. An hour later the official opening ceremony will begin with Phuket’s governor Maitri Inthusut as the guest of honor. From 6:30 to 7:30pm children can enjoy a concert of Kateeraya English. All children will get souvenirs and there will be free ice cream and drinks, multiple games and activities with prizes.

If you’re in Patong on Saturday, head for Loma Park where Children’s Day events will last from 8:30am to 3:30pm with 18 booths and various games and activities.

Celebrations at the grounds of the Chalong municipality office, near Wat Tai temple, begin at 8am and end at 2pm.

Navy organized Children’s Day events were moved this year from Phuket’s Deep Sea Port to Phang Nga. For boats and helicopters head for the Tablamu Royal Navy Office in Phang Nga. The fun begins at 8:30am.

Starting at 8:30am, there will be a lot of fun games, including ATV riding. Free food and drinks will be provided.

Best wishes from the staff of Phuket Gazette to all the children on the island!

A glimpse into the future