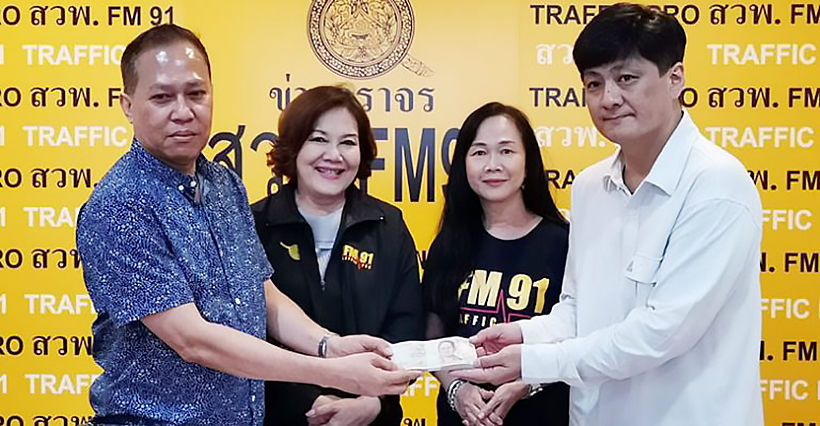 PHOTO: Asked how he felt when he saw the stack of cash, the driver said said he didn’t feel anything because it wasn’t his money and he didn’t want to keep it - INN

A Bangkok taxi driver returned 100,000 baht that was left in his cab to a Japanese man yesterday. 55 year old Pratuang Klongkaew returned a backpack to Masaomi Fukurono, aged 49, from Japan. Masaomi left the backpack in Pratuang’s taxi at about 4am.

Pratuang says that as he was delivering a tourist to a condo on Rama 4 road, the passenger handed him a grey and blue backpack and asked who it belonged to. At the time Pratuang didn’t look inside, he simply placed the bag on the front passenger seat. He returned the taxi at 6am and took the backpack home with him. While having breakfast with his wife, Pratuang opened the backpack and found 100,000 baht inside.

Asked how he felt when he saw the stack of cash, Pratuang said he didn’t feel anything because it wasn’t his money and he didn’t want to keep it. He says he wanted to return the money but didn’t know how, so he called local radio station FM 91 Traffic Pro and asked the station to help find the owner.

Masaomi revealed that he was with another Japanese friend when he called a taxi to On Nut BTS Station. Not long after leaving the taxi he realised he no longer had the backpack. The money didn’t even belong to him, but rather his friend asked him to look after it. He never expected to retrieve money and feared the backpack could’ve been picked up by the next passenger. He was overjoyed when FM 91 contacted him and will be returning the money to his friend.