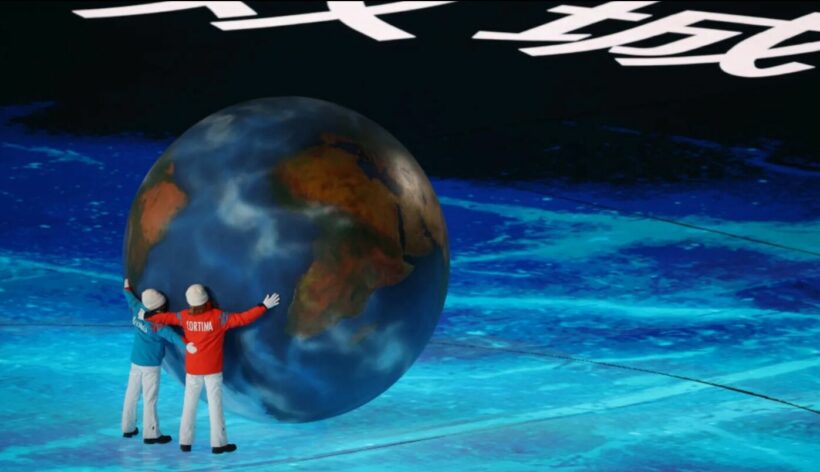 The closing ceremony of the Winter Olympics took place on Sunday night in Beijing, bringing the games to an official close — though the controversy surrounding them is far from over.

Norway finished first overall with a total of 37 medals, Germany came in second, raking up 27 medals, followed by the United States with 25 medals in total.

Germany came in second with 12 gold medals, and Norway finished first, topping the Olympic podium 16 times since the games began on Feb. 4.

The closing ceremony took place at the National Stadium, known as the Bird’s Nest, home to so many iconic sporting scenes in 2008’s Beijing Summer Olympics.

The ceremony began with the entrance of the International Olympic Committee members and Chinese leader Xi Jinpin and his entourage.

IOC President Thomas Bach got closer to Xi than perhaps any other Western leader in the past two years, as the two stopped about 12 feet away from each other and waved awkwardly.

Then there was the triumphant entry of the athletes, followed by a medals award ceremony for the winners from the final day of competition, and a video montage of highlights from the games.

Entertainment included a red scarfed children’s choir, and an Italian flag raising ceremony with an exclusive performance of the national anthem by singer Malika Ayane, accompanied by an enthusiastic violinist.

Then, standing at a white podium beneath a giant glowing snowflake in the center of the stadium, Bach began his closing speech with, “Xiexie, Zhongguo” (Thank you, China).

Speaking to the athletes, the IOC president and former Olympian spoke of the Olympic spirit, which has the power to unite people of all nations, despite ongoing conflicts among countries.

“We are all equal, regardless of what we look like, where we come from or what we believe. This unifying power of the Olympic Games is stronger than the forces that wants to divide us. You give peace a chance.

“May the political leaders around the world be inspired by your example of solidarity and peace.”

A somewhat confusing moment finished, as two children rolled out a large globe, which they hugged on top of a projection of cracking ice, with the slogan, “DUALITY, TOGETHER” (whatever that means), and the giant snowflake hanging above them.

The odd display was followed by some more (real) Italian entertainment — a modern dance performed under the glowing snowflake on a projected winter landscape.

As the Olympic torch was solemnly extinguished, the expected fireworks display lit up the stadium, with the pyrotechnic spectacle reading, “ONE WORLD, ONE FAMILY” above the Bird’s Nest and a simulation of red snowflakes floating out of the stadium and into the night sky — for TV audiences only, no doubt.

Although the Olympic flame has been extinguished in Beijing, the controversy surrounding the games will continue, as spectators across the globe debate who are the real winners and losers on the world’s biggest stage.

The games drew significant criticism from the international community over China’s human rights record, with a group of Western and Asian-Pacific countries staging a diplomatic boycott, including the US, the UK, Canada, India, Australia and several other European nations.

This year’s winter games highlighted the US-China rivalry, while also shining the spotlight on Russia’s continued doping offenses, including of child athletes.

Notably, the American-born freestyle skier Eileen Gu competed for China, winning gold in both the Big Air and Halfpipe events, sparking intense debate about her nationality and allegiance.

Competing for the US, Chinese-American Nathan Chen won gold for in the mens singles event.

Meanwhile, Russian teen figure skating prodigy Kamila Valieva was allowed to continue competing after it emerged that a blood sample tested positive for at least one banned substance, including a performance enhancing heart medication.

This year’s winter games also saw record low audiences in the US, as television networks cited strong anti-China sentiment, flamed by two years of pandemic, as well as the widespread criticism of China’s treatment of the Uyghur people in Xinjiang.

The Paralympic Winter Games will take place on March 4-13 in Beijing.

The next Winter Olympics will be held in February 2026 in Milan and Cortina d’Ampezzo, Italy.