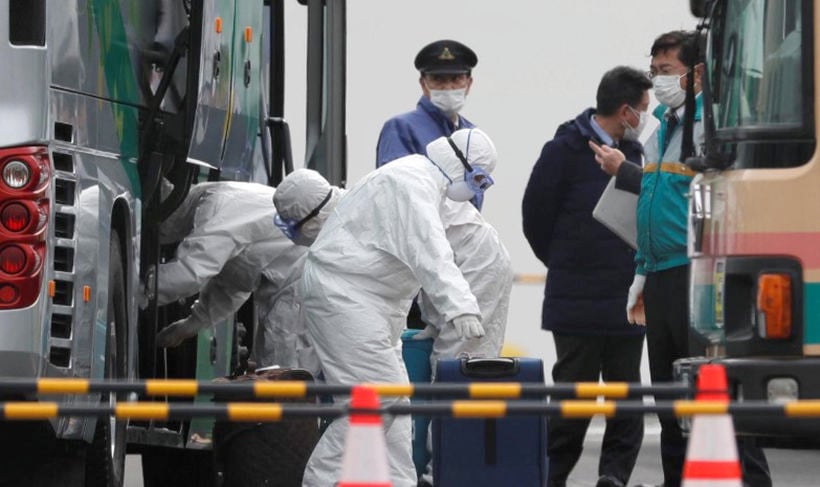 PHOTO: Workers load luggage into a bus as a second group of passengers from the Diamond Princess disembark in Yokohama - Reuters

Two elderly passengers of the Diamond Princess, the coronavirus-stricken cruise ship which spent two weeks in quarantine in Japan’s Yokohama Harbour, have died. State broadcaster NHK made the announcement this morning, as a second group of passengers began disembarking after fourteen days quarantined onboard. The passengers were both Japanese, a man and woman in their 80s.

More than 620 of the passengers on the Diamond Princess, which was quarantined on February 3 with about 3,700 people on board, have been infected. It represents the largest cluster of infections outside of China’s Hupei province, the epicentre of the outbreak.

Meanwhile, Beijing reported a significant drop in new coronavirus cases today, fuelling hopes the epidemic is nearing its peak. The death toll in China rose to 2,118 yesterday as 114 more people died, but health officials reported the lowest number of new cases there in nearly a month, including in hard-hit Hubei. More than 74,000 people have been infected in China and hundreds more in some 25 countries, with Iran reporting two deaths yesterday, the first fatalities in the Middle East.

The rapid spread of the disease has sparked criticism of authorities in Japan, which has well over half of he world’s confirmed cases outside of China, just months before Tokyo is to host the Summer Olympics.

Japan’s health minister today defended Japan’s response in the Japanese parliament, telling lawmakers that officials have taken expert advice and responded to issues on a daily basis. In a move to reassure the public, the health ministry also issued a statement in both English and Japanese saying all passengers had been required to stay in their cabins since February 5 to contain the virus.

About 500 passengers were set to disembark today, while another 100 people will leave for chartered flights home, a health ministry official said. An initial batch of passengers who had tested negative and shown no symptoms left the vessel yesterday. Those who shared a room with people testing positive were required to remain in quarantine, as were crew. The ministry could not confirm how many people remained on board, or when disembarkation would be complete.

Earlier in the week, the United States evacuated more than 300 nationals on two chartered flights. About 45 remained on board the cruise ship as of today. All Americans flown back will face another 14 days quarantine, as will returning Hong Kong residents. Disembarked Japanese passengers, however, face no such restrictions, which has sparked concern. Japan’s National Institute of Infectious Diseases (NIID) says “there should be no problem” if people have shown no symptoms for 14 days and tested negative for the virus while their health was under surveillance.