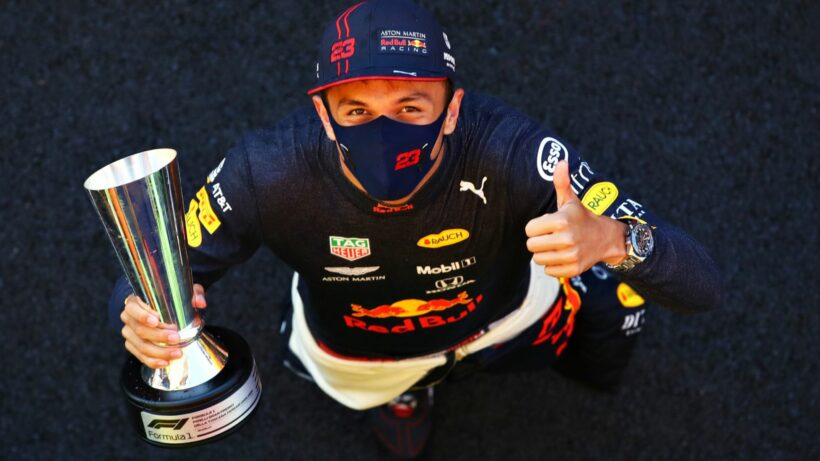 Red Bull will be grateful for the good PR today as British-born, Thai Formula One racer, Alex Albon, thanked the energy drink sponsors for their “faith” after he came third in last night’s incident-prone Tuscan Grand Prix, his first Formula One GP podium finish. The 24 year old finished in third place behind the Mercedes drivers to become the first Thai on the podium since 1950.

His father, Nigel Albon is a former British racing driver who participated in the British Touring Car Championship and Porsche Carrera Cup. His mother, Kankamol, is from Thailand.

The man Alex replaced in the Red Bull team, Pierre Gasly, won the Italian Grand Prix at Monza last week, putting additional pressure on the Red Bull team and their faith in the young Thai driver. Albon dropped into 7th place at one stage in last night’s race, battling his way back to a podium finish.

“Thanks for sticking with me. The team has supported me since Day One. It’s really good to get a podium, just to show that I can do it.”

“It was good obviously it is a while to get here but it was a tough one. I had to work for it. I am happy. I can breathe. It is nice to be here. It was brutal, especially the high-speed in sector two. It is more adrenaline going in my body than anything else. I am happy.”

Britains’ Lewis Hamilton took his 90th career victory by beating his Mercedes team-mate Valtteri Bottas in an incident-prone Tuscan GP. The race was interrupted by two red flags – the 1st caused by a pile-up on the pit straight, a 2nd by a high-speed crash for Lance Stroll.

In one of the most dramatic races for years, 6 cars had retired before a lap of racing had completed. Albon made hard work of the result. Starting 4th, he dropped back to 7th at the second start and had to fight his way back up, which he accomplished with some scintillating pass moves.

Red Bull team boss Christian Horner was aware that the young Thai had had a tough time over recent weeks.

“He’s weathered a bit of criticism, he’s bounded back… the last couple of weekends he’s been getting stronger and stronger. For him to get that podium today, he had to really fight for it. He had to do it the hard way.”

“Once he puts the helmet on, you can see there’s a real racer in there. There’s a big difference between thinking you can do it and knowing you can do it. I think this podium for him will just give him a boost of confidence and self-belief.”

Now there’s a welcome 2 week break for the racing schedule, after 9 races in 11 weeks, before the Russian Grand Prix, where Lewis Hamilton can equal a record some felt might never be broken – Schumacher’s haul of 91 victories.