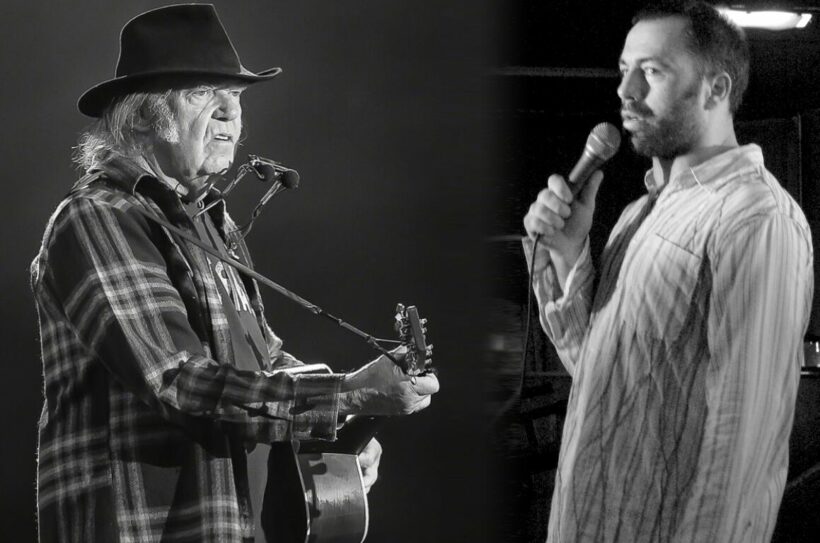 PHOTO: Neil Young vs. Joe Rogan on Spotify. (via Wikimedia)

After slamming Spotify for giving Joe Rogan a platform for spreading life-threatening vaccine misinformation, classic rocker Neil Young demanded that the music streaming service remove his catalogue and they complied. The legendary musician has never shied away from expressing his opinion and wrote an open letter last week calling out Spotify for carrying Joe Rogan popular podcast which gets millions of listens every week.

The prolific singer who performed such classics as “Rockin in the Free World”, “Harvest Moon” and “Heart of Gold” said that Rogan’s podcast spreads fake information about vaccines that could lead to people’s death. Joe Rogan has a huge audience base that led to him signing a multi-year exclusive deal with Spotify reportedly worth US $100 million. Neil Young complained that Spotify had given Rogan a platform to spread dangerous misinformation about the Covid-19 pandemic and vaccines.

Joe Rogan has used his podcast to promote the horse parasite drug Ivermectin as the best Covid-19 treatment while encouraging people, especially young people, to say no to vaccines. Last month a group of 270 professors, physicians, and doctors, published an open letter to Spotify asking them to combat misinformation on their streaming platform. Spotify released the statement yesterday saying that they do remove content though apparently Rogan is above reproach.

“We want all the world’s music and audio content to be available to Spotify users. With that comes great responsibility in balancing both safety for listeners and freedom for creators. We have detailed content policies in place and we’ve removed over 20,000 podcast episodes related to Covid since the start of the pandemic.”

Neil Young had over 6 million monthly listeners and 2.4 million followers and said about 60% of his streaming revenue worldwide is from Spotify. He had once before pulled his music from Spotify in 2015 for poor sound quality, and in leaving this time, he reiterated Spotify’s low quality and recommended other high-resolution streaming platforms.

Young’s music is expected to be removed completely from the platform immediately.

Transam
1 hour ago, nobusinessofurs said: I did look her up, didn't recognize any of her music, it sucked anyway. There ya go, calling folk a "has been" when you nothing about them......Amazing 🥴 I suppose all your favourite ageing music…

nobusinessofurs
1 minute ago, Transam said: There ya go, calling folk a "has been" when you nothing about them......Amazing 🥴 I suppose all your favourite ageing music folk are all now dismissed because of their longevity in the business, and are…

Transam
4 hours ago, mcambl61 said: Nothing is more hypocritical than refusing to admit that there are many more networks that peddle a constant false narrative directly in line with one political party, as you weakly mention fox news, while completely…

Transam
5 minutes ago, nobusinessofurs said: Just like your profile pic.......Gene Simmons look alike 555 Weeeell, you will probably call avatar, James Taylor, a "has been"....Right ?......😆
Marc26
Joe with reasonable response And I personally think he should be able to say whatever he wants But I also think, he should be better informed at times if he's going to talk on the subject …