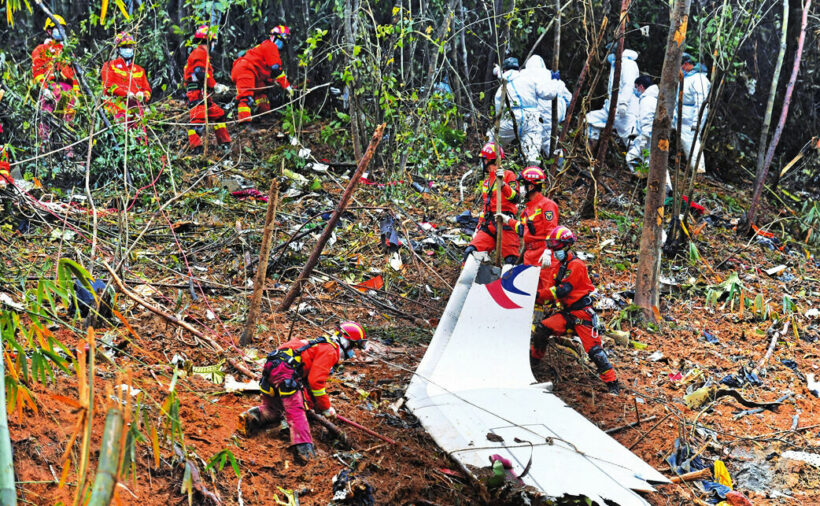 More than 10 kilometres from the main crash site where a China Eastern Airlines Boeing 737 jet crashed, a Chinese farmer has found what he suspects is a piece of the aircraft. The potential find indicates the challenges investigators face as they piece together answers as to why the six year old plane plunged from the skies over southern China.

The farmer, Huang Jianyi has told investigators he found the piece of metal as he was tending his paddy fields in Siwang, a day after the Boeing 737-800 carrying 132 people crashed into mountains in the Guangxi Zhuang autonomous region. According to the official rescue team, the piece found by the farmer is about 1.3 metres long and 10 centimetres wide.

Authorities also shared yesterday that the flight crew sent no emergency code or “unusual” communications before the plane lost contact, pitching down abruptly and going into a steep dive.

The finding of a part of the plane, 10 kilometres away from the crash site, could indicate that the plane suffered a catastrophic mid-air break up. Authorities are yet to confirm that the remote plane parts have anything to do with the China Eastern flight.

Meanwhile, the search for the second of two black box recorders continues as aviation experts aim to retrieve recorded flight data and cockpit conversations leading up to the incident. The first black box, the cockpit voice recorder, was recovered on Wednesday and sent to a laboratory in Beijing for initial analysis.

“There is still no definite time when the download will be completed and analysis can start. If the data storage chip is damaged, it would generally be sent to the recorder manufacturer for repair.”

The search for the second device is being complicated by extreme humidity and China’s stringent Covid-19 prevention measures.

Monday’s crash was China’s worst aviation disaster in more than a decade. The plane was a Boeing 737-800, part of the NG (or third generation) of the 737 jet family which first flew in 1967.

The plane was not one of the new, controversial, 737 Max jets, which nearly brought US plane manufacturer Boeing to its knees following two fatal incidents caused by faulty software called MCAS.

But Chinese aviation authorities have decided to ground China’s entire fleet of Boeing 737-800 planes until the investigation of last Monday’s incident is complete. Some 4,989 of the same model have been built by Boeing, out of 7,124 for the entire NG family, making it one of the most popular planes flying in the world. This compares with 10,236 deliveries of the Airbus A320, the single-aisle, short-haul competitor built by Airbus.

Recovery organisers have already allowed 375 family members to visit the crash site to pay their respects.

Yesterday, Huang Jun, a professor of School of Aeronautic Science and Engineering with Beihang University, said that the sudden dive could be as a result of “sudden failure of the flight control system”, resulting in a nosedive. Speculation has also been rife about a possible rogue action of one of the two pilots in the cockpit but investigators say they currently have no evidence of this.

Meanwhile, Wang Ya’nan, chief editor of Beijing-based Aerospace Knowledge, told Global Tomes that, judging from the available online flight data… “there is no reason to indicate that the pilot made any contact with ground control”.

“It could be a very serious technical failure, in which the plane inevitably enters a high-speed descent.”

The China Eastern flight took off from Kunming, in southwest China’s Yunnan Province at 1:16 pm on Monday, and entered Guangzhou air and traffic control area at a cruising altitude of 8,900 metres at 2:17 pm.

At 2:20 pm (China time), the air traffic controller noticed that the aircraft’s altitude had “dropped sharply”, and immediately called the flight crew several times. There was no response to any of the messages.

At 2:23 pm, the radar signal disappeared.

KaptainRob
PLEASE NOTE: The photo shows a winglet at the impact site, NOT the metal strip found 10km away which I believe may be part of the fuselage.
Cathat
As far as i am aware both the black boxes are located quite close together on this type of aircraft. Would have thought taking into account the way it speared in that the other box should be very close by…

KaptainRob
The second 'black box', the all important Flight Data Recorder (FDR) has just been found.