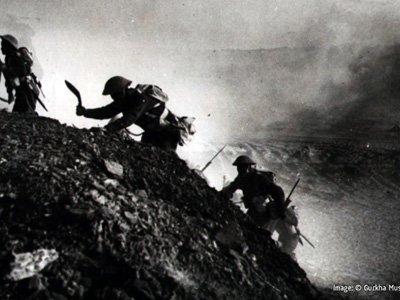 
Nepal rites to banish ghosts of fallen Gurkha soldiers
Reuters / Phuket Gazette
PHUKET: Wrapped in white and with their heads shaven, retired Gurkha soldiers sat cross-legged on the stems of dried rice plants for three days of symbolic and traditional mourning, laying to rest the souls of fellow soldiers who fought and died for Britain.

Hailing from the foothills of the Himalayas, the Gurkhas are known for their fierce fighting skills and big curved khukuri knife. They have served in the British army since 1815 when a peace agreement was reached by the British East India Company after it suffered heavy casualties during an invasion of Nepal.

The Gurkha Army Ex-servicemen’s Organisation (GAESO), a group which works for the retired soldiers, said about 60,000 soldiers from Nepal were killed in the two World Wars but that this had never been properly acknowledged.

The group organised mourning ceremonies where priests from the 17 ethnic groups to which the Gurkha soldiers belonged performed separate rituals at Syangja, 135 km (84 miles) west of Kathmandu.

“Their souls are still wandering around because their funerals were never held according to customs and traditions,” GAESO said in a statement. “The souls should be freed by performing the customary rites.”

The mourners sat for three days in separate tents and lit butter lamps and incense sticks as thousands of visitors paid tribute to the soldiers in rituals which concluded today.

Many in Hindu majority Nepal believe that their children and grandchildren cannot live in peace if the customary mourning rites are not performed for deceased ancestors and their souls are left to roam like ghosts.

The Gurkhas were part of the British Indian army before 1947 but were split between the two countries after India became independent from Britain.

Gurkhas have fought in recent years in the Falklands, Iraq and Afghanistan but their numbers, which topped 112,000 in World War II, have fallen to about 3,000 in the British armed forces at present.