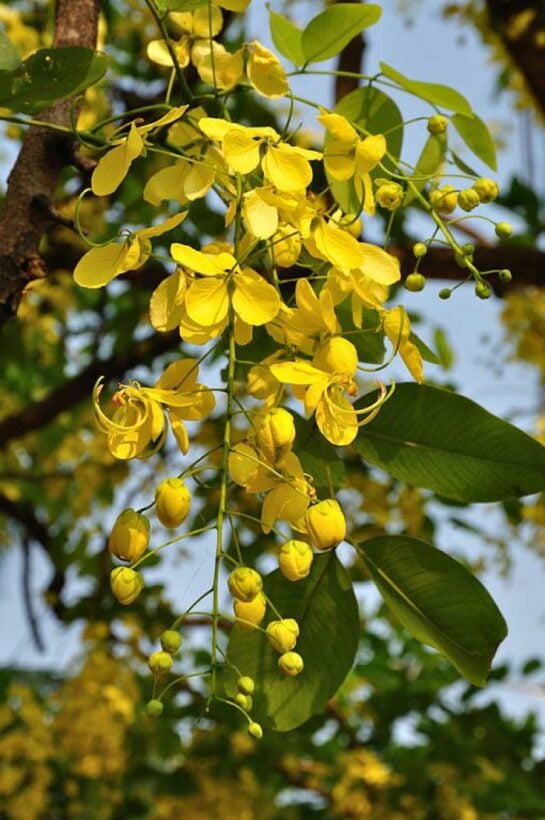 PHUKET: You probably hadn’t noticed that I was plowing my way through the botanical alphabet before getting distracted by more alluring prospects, or the pressing horticultural needs of a four-month- long drought.

Well, anyway, most of the tropical plants listed under the letter “I” are in the index by virtue of an Indian designation: Indian banyan, Indian cork tree, Indian rubber vine, Indian shot, Indian rhododendron, Indian laburnum.

Indeed, the botanical name “Indica” means that the plant hails originally from India, though the epithet is used colloquially by aficionados to indicate – oh dear, more puns – a variety of cannabis. Still I suppose we can at least talk about “ganja” or “weed” these days since it has now been legalized in Canada and certain American states. Dreaming again…

Of the aforementioned plants, the one that first springs to mind is the golden shower tree (cassia fistula) which is putting on a marvelous show around Phuket at present. The dry spell has meant fewer leaves (which normally appear as the flowers arrive), but has induced a spectacle of cascading yellow racemes. A small compact tree, rarely more than twenty feet tall, its hardiness and propensity for tolerating dry conditions make it ideal as a yard tree, to front a wall or as a specimen ornamental on a lawn. Grow it from seed or from cuttings.

At the other end of the scale, as far as ease of cultivation is concerned, is the Indian rhododendron. The name too is a mouthful – melastoma malabatricum and is certainly no easier in Thai where it transliterates into something approximating to khlong kheng knii-nok. A fairly recent arrival in Phuket’s nurseries, it is an evergreen, spreading shrub with large, purple, five-petalled flowers. It grows wild in parts of India, Assam for example, but struggles here – at least in my experience. I have seen the similar but even more spectacular tibouchina ablaze in Southern California, but melastoma seems to find the Thai climate, or at least my garden, a bit oppressive.

The variety you will most likely encounter is melabathricum, which has attractive veined leaves, but it will need plenty of TLC – humus-rich, fertile, moist soil, but not waterlogged conditions. I would be keen to hear from fellow enthusiasts who have successfully cultivated this shrub: in the case of my potted specimen, the leaves turned brown and the plant slowly expired. The variety M candidum is hardier, grows more vigorously and has white as well as pink flowers. But I have yet to see it in garden centers.

I just took a peek at my Indian rubber vine. In contradistinction to melastoma, this shrub loves Phuket’s climate and soil, even though my normally profligate specimen today sports a solitary bloom. It really does miss the rains, but the wonderfully glossy, olive green foliage is as lush as ever. Like the Rangoon creeper, the allamanda, and the chalice vine, it normally produces masses of flowers – in this case musky scented, creamy pink trumpets – and like these other vines, it will need some support. Strophanthus (yaem pii nang in Thai) is likewise a vigorous grower, too big for a container, but ideal against a wall or a trellis. A must-have shrub.

The last plant in my Indian super league is millingtonia. Also known as the Indian cork tree, it is a bit too big for the average garden but if you can accommodate it, it will repay your hospitality, allowing smaller plants to flourish in its dappled shade. Anyway, millingtonia looks great as a yard or wayside tree. It has distinctive, deeply furrowed, corky bark, and a drooping habit, but its pride and joy is clusters of delicate, star-shaped flowers which cascade down from long white stems, creating the illusion, almost, of falling snow. A world away…

TIP OF THE WEEK
Most plants survive by using the green chlorophyll in their leaves to convert light energy into chemical energy that can be stored and used to promote growth. The process is call photosynthesis.

It follows then that plants normally seek light by turning towards a light source. This process is called phototropism. Sun loving plants that follow the sun’s movement are called heliotropic – for example sunflowers and heliotropes. Rare shade lovers such as the moonflower vine exhibit negative phototropism.

The gardener should recognize this need. In the case of outdoor pot plants, turn them occasionally so that the shaded part gets a chance to enjoy the sun. Otherwise you may get uneven growth.

And house plants, mostly understorey dwellers in the wild, and chosen because they require lower levels of light, will still need to be taken outside periodically to a place where they can enjoy filtered sunlight and thus increase the process of photosynthesis.

All tied up: The art of cowboy rope tricks