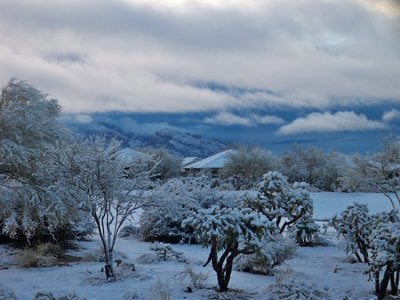 A college student from Arizona who went missing earlier this month has been found alive after being stranded in her car in the middle of a blizzard for ten days, local media reported yesterday.

Arizona State University student Lauren Elizabeth Weinberg, 23, was spotted in her vehicle on Wednesday morning by U.S. Forest Service employees who were checking road closure gates in the Coconino County area, about 46 miles (74 kilometers) from the city of Winslow.

According to a report by KTVK-TV, Weinberg had left her mother’s house near Phoenix on December 11. But she became trapped in the middle of a snow blizzard a day later after her cell phone stopped working.

Weinberg explained that she was driving to no specific destination when she became trapped near Winslow. While driving on a paved road that later turned into a dirt road, she reached a fence line, but when she tried to turn back, the vehicle became stuck in the snow.

She was found in good health, although she was very hungry, thirsty and cold. Local authorities said she was able to survive throughout the 10 days on two candy bars and melted snow.

“I am so thankful to be alive and warm,” she said in a statement quoted by KTVK-TV. “Thank you for your thoughts and prayers because they worked. There were times I was afraid, but mostly I had faith I would be found.”