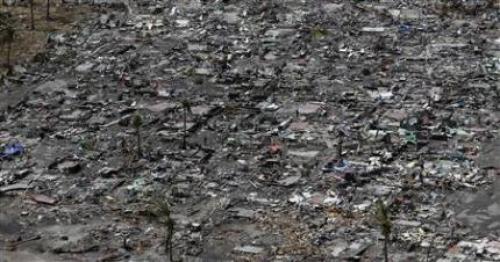 PHUKET: Dazed survivors begged for help and scavenged for food, water and medicine on Monday, as relief workers struggled to reach victims of a super typhoon that killed an estimated 10,000 people in the central Philippines.

As President Benigno Aquino deployed hundreds of soldiers in the coastal city of Tacloban to quell looting, the huge scale of death and destruction become clearer as reports emerged of thousands of people missing and images showed apocalyptic scenes in one town that has not been reached by rescue workers.

One of the most powerful storms ever recorded, typhoon Haiyan levelled Basey, a seaside town in Samar province about 10 km (6 miles) across a bay from Tacloban in Leyte province, where at least 10,000 people were killed, according to officials.

About 2,000 people were missing in Basey alone, said the governor of Samar province.

The United Nations said officials in Tacloban, which bore the brunt of the storm on Friday, had reported one mass grave of 300-500 bodies. More than 600,000 people were displaced by the storm across the country and some have no access to food, water, or medicine, the U.N. says.

Flattened by surging waves and monster winds up to 235 mph (378 kph), Tacloban, 580 km (360 miles) southeast of Manila, was relying almost entirely for supplies and evacuation on just three military transport planes flying from nearby Cebu city.

Dozens of residents clamoured for help at the airport gates.

Three days after the typhoon made landfall, residents’ terrifying accounts of being swept away by a wall of water revealed a city that had been hopelessly unprepared for a storm of Haiyan’s almost unprecendented power.

Most of the damage and deaths were caused by huge waves that inundated towns, washed ships ashore and swept away coastal villages in scenes reminiscent of the 2004 Indian Ocean tsunami.

Jean Mae Amande, 22, said she was washed several kilometres from her home by the sudden surge of water. The current ripped her out to see before pushing her back to shore where she was able to cling on to a tree and grab a rope thrown from a boat.

An old man who had been swimming with her died when his neck was gashed by an iron roof, she said.

“It’s a miracle that the ship was there,” Amande said.

Haiyan, one of the strongest typhoons ever recorded, is estimated to have destroyed about 70 to 80 percent of structures in its path. The damage to the coconut- and rice-growing region was expected to amount to more than 3 billion pesos ($69 million), Citi Research said in a report, with “massive losses” for private property.

Bodies litter the streets of Tacloban, rotting and swelling under the hot sun and adding to the health risk. People walked covering their noses with rags or old clothes to mask the stench.

Tacloban’s administration appeared to be in disarray as city and hospital workers focused on saving their own families and securing food supplies.

Operations were further hampered because roads, airports and bridges had been destroyed or were covered in wreckage. Threatening to add to the crisis in the impoverished area, a tropical depression carrying heavy rain was forecast to arrive in the region as early as Tuesday.

Awelina Hadloc, 28, the owner of a convenience store, foraged for instant noodles at a warehouse that was almost bare from looting. She said her store had been washed away by a 10-foot (3-metre) storm surge.

“It is so difficult. It is like we are starting again,” said Hadloc. “There are no more supplies in the warehouse and the malls.”

Aquino, facing one of the biggest challenges of his three-year rule, deployed 300 soldiers and police to restore order in Tacloban after looters rampaged through several stores.

Aquino, who before the storm said the government was aiming for zero casualties, has shown exasperation at conflicting official reports on damage and deaths. One TV network quoted him as telling the head of the disaster agency that he was running out of patience.

The official death toll is likely to climb rapidly once rescuers reach remote villages along the coast, such as Guiuan, a town in eastern Samar province with a population of 40,000 that was largely destroyed.

“The only reason why we have no reports of casualties up to now is that communications systems … are down,” said Colonel John Sanchez, posting on the Armed Forces Facebook page.

About 400 people were confirmed dead in Samar province, according to provincial governor Sharee Ann Tan. Baco, a city of 35,000 in Oriental Mindoro province, was 80 percent under water, the U.N. said.

U.S. aid groups also launched a multimillion-dollar relief campaign. An official from one group, World Vision, said there were early reports that as much as 90 percent of northern Cebu had been destroyed. An aid team from Oxfam reported “utter destruction” in the northern-most tip of Cebu.

Thirteen people were killed and dozens hurt during heavy winds and storms in Vietnam as Haiyan approached the coast, state media reported, even though it had weakened substantially after hitting the Philippines.

PHUKET: Rioters threw stones and fire-crackers at police in the Polish capital on Monday, and a car was set on fire, after clashes broke out between far-right protesters and left-wing activists, a Reuters reporter said.

A group of about 60 young men, some in balaclavas and with scarves covering their faces, broke away from a far-right march through the centre of Warsaw and started attacking a building where left-wing squatters had hung a banner.

Dozens of riot police moved in to try to separate the rival groups, but they were attacked with projectiles. The Reuters reporter saw plain clothes officers forcing several young men to the ground and hand-cuffing them.

An ambulance and fire truck were at the scene, while a police helicopter circled overhead. The annual far-right march, which coincides with Poland’s national independence day, also turned violent last year.

PHUKET: Sexual harassment, high rates of female genital cutting and a surge in violence and Islamist feeling after the Arab Spring uprisings have made Egypt the worst country in the Arab world to be a woman, a poll of gender experts showed on Tuesday.

Discriminatory laws and a spike in trafficking also contributed to Egypt’s place at the bottom of a ranking of 22 Arab states, the Thomson Reuters Foundation survey found.
— Phuket Gazette Editors