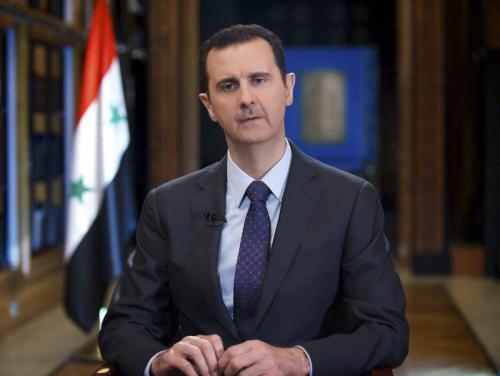 
Syria offers Aleppo truce as rebels argue over talks
Reuters / Phuket Gazette
PHUKET: The Syrian government, preparing for peace talks with rebels next week, handed the Russian co-sponsors of the conference a proposal on Friday for a local ceasefire and an exchange of prisoners.

There was no immediate response from President Bashar al-Assad’s opponents, whose very attendance at the talks due to start on Wednesday in Switzerland remained in doubt – prompting a last-minute appeal to them from the United States.

Syrian Foreign Minister Walid al-Moualem, on a visit to Moscow, said he had given Russian officials a plan for a truce in Aleppo, Syria’s biggest city, and said the government was ready to exchange lists of prisoners to be swapped.

Moscow and Washington, favouring opposing sides, respectively for and against Assad, have urged both parties to make concessions, including ceasefires, access for aid and prisoner exchanges, to build confidence before the conference.

But there is little sign of coherent negotiating positions or of violence abating. Rebels are fighting each other, in battles involving Islamist militants whose influence has cooled Western support for the uprising. Assad’s forces, once reeling, have recovered and have been bolstered lately by new Russian arms and supplies, sources have told Reuters.

Most of the disparate rebel forces fighting inside Syria have dismissed the negotiations, known as Geneva-2, and exile opposition leaders backed by Western and Arab powers met in Turkey to decide whether to take part. It remained unclear how or when they would reach a final decision, however.

US Appeals To Rebels

The United States, the co-sponsor with Russia, issued an 11th-hour appeal to Assad’s opponents to participate in the first direct peace negotiations in nearly three years to end a civil war that has killed over 100,000, driven millions from their homes and inflamed tensions across the region and beyond.

The Syrian National Coalition, a fractious 120-member body, has already seen some of its members declare their hostility to joining the talks at Montreux – many for fear it will undermine their credibility at home to engage in a process they see as having little chance of forcing Assad to step down.

“The United States … urges a positive vote,” U.S. Secretary of State John Kerry said of the SNC on Thursday.

“The Geneva peace conference is not the end but rather the beginning, the launch of a process … that is the best opportunity for the opposition to achieve the goals of the Syrian people and the revolution.”

Kerry also poured scorn on “revisionism” from Damascus, which has made clear it rejects rebel and Western demands that Assad make way for a transitional leadership and has suggested talks focus on cooperation against “terrorism” – code for the Islamists, including al Qaeda, that dominate on the frontlines.

“Syria … is the strongest magnet for terror of any place today,” Kerry said. “It defies logic to imagine that those whose brutality created this magnet … could ever lead Syria away from extremism and towards a better future.”

Russian Foreign Minister Sergei Lavrov, at a news conference with Moualem on Friday, criticised the Syrian opposition for its delay in agreeing to take part: “It worries us very much that some kind of game is being played,” he said.

Moualem said the proposals from Syria could ease the conflict: “We would like this to serve as an example to other towns,” he said of the ceasefire plan for Aleppo.

Lavrov, who also met Iran’s foreign minister on Thursday, called again for Tehran, Assad’s main sponsor in the region, to be represented at the conference – something other powers have resisted on the grounds that Iran has not endorsed the view of a first Geneva meeting in 2012 that an interim administration should be established in Damascus to end the conflict.

In the latest fighting, rebels ousted an al Qaeda-linked faction from one of its northwestern bastions on Friday, activists said, a significant blow to the group after two weeks of battles that have undercut the revolt against Assad.

Clashes since the start of the month have killed more than 1,000 people, according to Syrian Observatory for Human Rights monitors, and helped Assad’s forces claw back territory around the northern commercial hub of Aleppo.

On Friday, the Observatory and activists said the Islamic State in Iraq and the Levant (ISIL) had pulled out of the northern town of Saraqeb, strategically important because it straddles highways connecting Aleppo, the capital Damascus and Assad’s coastal stronghold of Latakia.

“They burned their cars before the withdrawal and pulled out after covering fire from a brigade loyal to them,” the British-based Observatory said.

Rival insurgents – including many from the Islamic Front, a large alliance of some of Syria’s most powerful rebel groups – had been fighting to take the town for days and moved tanks and machinegun-mounted pickups against ISIL about a week ago.

A Saraqeb-based activist said ISIL’s position weakened when an allied brigade pulled out to protect the nearby town of Sarmin, also under siege by the Islamic Front.

Local resentment toward ISIL, a reinvigorated version of al Qaeda in Iraq, had been growing over their kidnapping and killing of opponents and attempts to impose an uncompromising interpretation of Islamic law in territory under their control.

ISIL, which draws strength from a core of battle-hardened foreign Islamists and which has been active in Iraq, also angered fellow rebels by seizing territory from rival groups.

But the group’s loss of Saraqeb, while significant, is unlikely to bring the fighting much closer to an end. ISIL still controls large amounts of territory.

The conflict has spilled over Syria’s borders. Rocket fire into the Lebanese border town of Arsal killed at least seven people and wounded 15 on Friday, Lebanon’s state news agency said, in one of several such salvoes to hit towns near Syria.