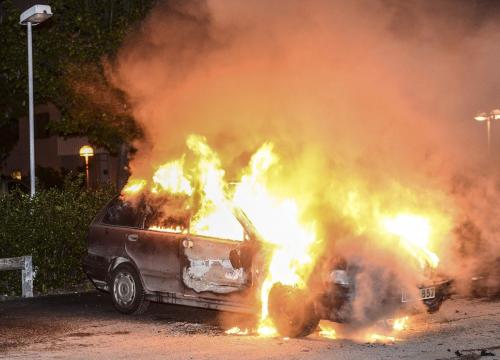 Stockholm rocked by riots
Reuters / Phuket Gazette
PHUKET: Violence spread from the North to the South of the city on Wednesday as groups of youth pushed through Stockholm’s suburbs casting stones, breaking windows and setting cars alight. Police in the southern Swedish city of Malmo said two cars had been set ablaze.

Local media said a police station office was set on fire in the southern suburb of Rågsved, where several people were also detained. No one was hurt and the fire was quickly put out.

The attackers have awaited nightfall before setting out, defying a call for calm from the country’s prime minister and damaging stores, schools, a police station and an arts and crafts centre in the four days of violence.

“I think there is a feeling that we need to be in more places tonight,” said Towe Hagg, spokeswoman for Stockholm police. One police officer was injured in the latest attacks and five were arrested for attempted arson.

Selcuk Ceken, who works at a local youth activity centre in Hagsatra, said between 40 and 50 youths threw stones at police and smashed windows, then ran off in different directions. He noted the people were in their 20s and seemed well organised.

The riots appear to have been sparked by the police killing of a 69-year-old man wielding a machete in the suburb of Husby this month, which prompted accusations of police brutality. The riots then spread from Husby to other poor Stockholm suburbs.

“We see a society that is becoming increasingly divided and where the gaps, both socially and economically, are becoming larger,” said Rami Al-khamisi, co-founder of Megafonen, a group that works for social change in the suburbs.

“And the people out here are being hit the hardest … We have institutional racism.”

The riots were less severe than those of the past two summers in Britain and France but provided a reminder that even in places less ravaged by the financial crisis than Greece or Spain, state belt-tightening is toughest on the poor, especially immigrants.

“The reason is very simple. Unemployment, the housing situation, disrespect from police,” said Rouzbeh Djalaie, editor of the local Norra Sidan newspaper, which covers Husby. “It just takes something to start a riot, and that was the shooting.”

Djalaie said youths were often stopped by police in the streets for unnecessary identity checks. During the riots, he said some police called local youths “apes.”

The television pictures of blazing cars come as a jolt to a country proud of its reputation for social justice as well as its hospitality towards refugees from war and repression.

“I understand why many people who live in these suburbs and in Husby are worried, upset, angry and concerned,” said Justice Minister Beatrice Ask. “Social exclusion is a very serious cause of many problems, we understand that.”

After decades of practising the “Swedish model” of generous welfare benefits, Stockholm has been reducing the role of the state since the 1990s, spurring the fastest growth in inequality of any advanced OECD economy.

While average living standards are still among the highest in Europe, successive governments have failed to substantially reduce long-term youth unemployment and poverty, which have affected immigrant communities worst.

Some 15 percent of the population are foreign-born, and unemployment among these stands at 16 percent, compared with 6 percent for native Swedes, according to OECD data.

Youth unemployment in Husby, at 6 percent, is twice the overall average across the capital.

The left-leaning tabloid Aftonbladet said the riots represented a “gigantic failure” of government policies, which had underpinned the rise of ghettos in the suburbs.

As unemployment has grown, the anti-immigrant Sweden Democrats party has risen to third in polls ahead of a general election due next year, reflecting many voters’ worries that immigrants may be partly to blame.

While many of the immigrant population are from Nordic neighbours closely tied to Sweden by language or culture, the debate has tended to focus on poor asylum seekers from distant war zones.

Out of a total 103,000 immigrants last year, 43,900 were asylum seekers, almost 50 percent up from 2011. Nearly half of these were refugees from fighting in Syria, Afghanistan or Somalia, and will get at least temporary residency.

Among 44 industrialised countries, Sweden ranks fourth in the absolute number of asylum seekers, and second relative to its population, according to U.N. figures.

Policing in Stockholm has already been the focus of controversy this year, with allegations that police were picking out darker-skinned immigrants for identity checks in subway trains.

Attorney General Eric Holder named the dead U.S. citizens in a letter to members of Congress a day before President Barack Obama is expected to promise more transparency on national security issues in a speech on counterterrorism.

Holder confirmed that the United States had “specifically targeted and killed” New Mexico-born Awlaki in Yemen in 2011.

He said the other three Americans who were killed, but not deliberately targeted, were Awlaki’s teenage son Abdulrahman, Samir Khan, an American of Pakistani origin who died in Yemen, and Jude Kenan Mohammed from North Carolina, who was indicted on U.S. terrorism charges in 2009 and was killed in Pakistan.

U.S. officials had previously acknowledged privately that the two Awlakis and Khan had been killed in drone strikes. Mohammed’s death was also in a drone strike, a source familiar with the matter said.

Holder’s letter offered a detailed justification for the CIA’S killing of Awlaki, who Holder said had “repeatedly made clear his intent to attack U.S. persons and his hope that these attacks would take American lives.”

The killing of Awlaki, 40, was the first, and only, publicly known case in which a U.S. citizen was deliberately targeted for killing by drone strike.

Holder offered considerable new detail on the government’s rationale for adding the U.S.-born preacher’s name to a kill list that previously had been exclusively reserved for non-U.S. citizens.

“Based on generations-old legal principles and Supreme Court decisions handed down during World War II, as well as during the current conflict, it is clear and logical that United States citizenship alone does not make such individuals immune from being targeted,” Holder said.

Obama is under pressure from a series of scandals which critics say shows his administration is secretive and weak on protecting civil liberties.